Vaccines: Europe is ‘so far behind UK’ says professor

And Facts4EU.org’s editor-in-chief Leigh Evans said the findings were evidence of the bloc’s “monumental” failure. Facts4EU used stats compiled by the Our World in Data website to underline the striking contrast between the UK and the EU27, encapsulating their findings in two charts.

The first shows the number of doses administered per 100 people, with the UK’s figure of 63 far outstripping that of Spain, the top-performing EU nation, on just 24.6.

Another chart highlights the number of people who have been fully vaccinated. In the UK, the figure is 14.6 – almost double that of Italy, the best of the bloc’s members, on 7.4 percent.

Leigh Evans, Facts4EU’s editor-in-chief, said: “As it is, Brexit Britain has shown itself to be nimbler and much more effective than the cumbersome and inefficient machine which wishes to run all aspects of life for the EU27’s 434 million inhabitants.

“Bureaucratic Brussels hasn’t just failed, it has failed on a monumental scale. 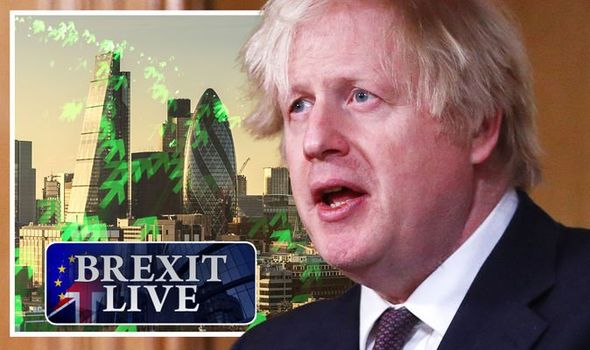 “And all of this from an organisation which claimed last week to be the largest producer of vaccines in the world.

“The reality of course is that the EU hasn’t produced a single vaccine. Private companies have.

“And yet the EU is a long way behind the UK and the USA in its vaccination programme.”

Mr Evans added: “In providing this official information, Facts4EU.Org is not gloating – which seems to be the only response from Remainer-Rejoiners – we are simply pointing out the facts.

“And the facts show that an independent United Kingdom has outperformed the EU by a long margin in its vaccination programme.”

[THIS IS A LIVE BLOG – SCROLL DOWN FOR REGULAR UPDATES]

7.33am update: New study shows half of leavers were not ‘left behind’ supporters but ‘affluent’

New research has unpicked the stereotype that Brexit supporters are working-class “left behind” voters.

A report by UK in a Changing Europe shows that half of Brexiteers were actually comfortably well off.

The research highlights that they did not have expectations of huge economic gains but thought that leaving the EU would help address other issues in Britain.

The think tank, UK in a Changing Europe, drew on workshops from the summer of 2020 by the NatCen Social Research.

Football fans in England are set to be allowed to stand at games before the end of the current season, in a reversal of the 30-year rule requiring all-seater stadiums. Many clubs in the Premier League – including Liverpool, Chelsea, Manchester City and Manchester United – have recently installed “safe standing” areas, with rail seating, […]

Brexit has ‘exposed consequences’ of leaving EU says Barnier The Brussels diplomat hinted EU leaders will have to make an example of Brexit to prove to potential rebels that it’s “better to be inside than outside”. He said they should prepare to “combat” the same levels of resentment in the Brussels project that prompted Britons’ […]

The aggressive fund-raising tactics that former President Donald J. Trump deployed late in last year’s presidential campaign have continued to spur an avalanche of refunds into 2021, with Mr. Trump, the Republican Party and their shared accounts returning $12.8 million to donors in the first six months of the year, newly released federal records show. […]

Apple’s new programme allows customers to make their own repairs