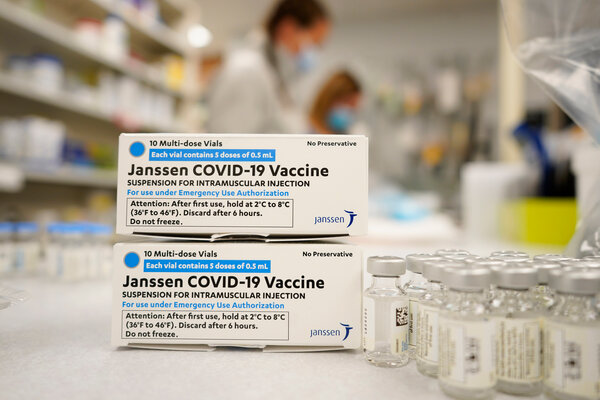 A decision about whether to resume administering the Johnson & Johnson coronavirus vaccine should come this Friday, when an expert panel that is advising the Centers for Disease Control and Prevention is scheduled to meet, according to Dr. Anthony S. Fauci, the nation’s leading infectious disease expert.

“I think by that time we’re going to have a decision,” Dr. Fauci said on Sunday on the CNN program “State of the Union.”

“I don’t want to get ahead of the C.D.C. and the F.D.A. and the advisory committee,” he added, but said he expected experts to recommend “some sort of either warning or restriction” on the use of the vaccine.

Federal health agencies recommended putting injections of the vaccine on pause on Tuesday while they investigated whether it was linked to a rare blood-clotting disorder. All 50 states, in addition to Washington, D.C., and Puerto Rico, have stopped administering the vaccine.

The unusual disorder includes blood clots in the brain combined with low levels of platelets, blood cells that typically promote clotting. The combination, which can cause clotting and bleeding at the same time, was initially documented in six women between the ages of 18 and 48 who had received the vaccine one to three weeks prior. One of the women died, and another was hospitalized in critical condition.

This pattern has prompted questions about whether vaccinations could resume in men or in older people. But because women fill more of the health care jobs for which vaccinations have been prioritized, it is not clear how much the problem might affect men, too. On Wednesday, two more cases of the clotting disorder were identified, including one in a man who had received the vaccine in a clinical trial.

Of the 129.5 million people who have received at least one dose of a Covid-19 vaccine in the United States, more than seven million have received Johnson & Johnson’s. If there is a link between the vaccine and the clotting disorder, the risk remains extremely low, experts say.

“It’s an extraordinarily rare event,” Dr. Fauci said on the ABC program “This Week.” The pause was intended to give experts time to gather more information and to warn physicians about the clotting disorder so that they can make more informed treatment decisions, said Dr. Fauci, who appeared on four TV news programs on Sunday morning.

European regulators have been investigating similar cases of the unusual clotting disorder in people who have received the AstraZeneca vaccine. Some European countries have since stopped administering that vaccine altogether, while others have restricted its use in younger people.

Dr. Fauci also expressed frustration that “a disturbingly large proportion of Republicans,” who have been critical of many coronavirus restrictions, have expressed a reluctance to be vaccinated. “It’s almost paradoxical,” he said. “On the one hand they want to be relieved of the restrictions, but on the other hand, they don’t want to get vaccinated. It just almost doesn’t make any sense.”

Dr. Fauci said that he expected all high school students to become eligible for vaccination before school begins in the fall, with younger children eligible no later than the first quarter of 2022.

TASHKENT (AFP) – Uzbekistan said on Sunday (Aug 15) that 84 Afghan soldiers crossed into Uzbekistan on the same day the Taleban seized Afghanistan’s fourth-largest city and said its government had offered humanitarian assistance to Kabul’s troops. The Central Asian country said border troops had arrested the “violators of the state border” and that the […]

By Balazs Koranyi and Anne Kauranen DAVOS, Switzerland/HELSINKI (Reuters) – The European Central Bank should adopt a simple inflation target of 2% and scrap its current “below, but close to, 2%” formulation which can confuse consumers and policymakers alike, two ECB rate-setters said on Friday. The ECB has lagged its goal for price growth for […]

Russia to raise as much debt for budget as possible but not at every price: finance ministry

By Darya Korsunskaya MOSCOW (Reuters) – Russia plans to raise as much debt at home this year as possible to finance its budget needs amid the coronavirus crisis but not at any price, Konstantin Vyshkovsky, head of the debt department at the finance ministry, told Reuters in an interview. The finance ministry has already set […]

Boris Johnson’s bid to ‘claw power back’ from devolved parliaments