It was a familiar scene on Sunday when Senator John Thune, Republican of South Dakota, tried to avoid giving a direct answer about the caustic behavior of former President Donald J. Trump.

Mr. Trump had called Senator Mitch McConnell, the minority leader, “dumb” and used a coarse phrase to underscore it while speaking to hundreds of Republican National Committee donors on Saturday night. When Mr. Thune was asked by Chris Wallace, the host of “Fox News Sunday,” to comment, he chuckled and tried to sidestep the question.

“I think a lot of that rhetoric is — you know, it’s part of the style and tone that comes with the former president,” Mr. Thune said, before moving on to say Mr. Trump and Mr. McConnell shared the goal of reclaiming congressional majorities in 2022.

Mr. Thune was not the only Republican straining to stay on the right side of the former president. The day before Mr. Trump delivered his broadsides against Mr. McConnell, Senator Rick Scott of Florida, the chairman of the National Republican Senatorial Committee, presented Mr. Trump with a newly created award for his leadership.

And Nikki Haley, the former ambassador to the United Nations under Mr. Trump who enraged him when she criticized his actions in connection to the Jan. 6 riot, and indicated the party needs to move on, has also been trying a delicate dance to work back into a more neutral territory.

This week, she told The Associated Press that she would not run if Mr. Trump did, a display of deference that underscored the complications the former president represents to Republicans.

Like many Republicans, Mr. Thune, Mr. Scott and Ms. Haley were navigating the impulses of a former president who talks privately about running again in 2024, and who is trying to bend the rest of the party to his will, even after the deadly riot by his supporters at the Capitol on Jan. 6. He retains a firm hold on a devoted group of Republican voters, and party leaders have discussed the need to continue appealing to the new voters Mr. Trump attracted over the past five years.

To some extent, their posture recalls the waning days of Mr. Trump’s first primary candidacy, in 2015 and 2016. While Mr. McConnell and a few other Republicans have been directly critical of Mr. Trump’s conduct following the Capitol riot, most are trying to avoid alienating the former president, knowing he will set his sights on them for withering attacks, and hoping that someone or something else intervenes to hobble him.

Even as Mr. Trump makes clear he will not leave the public stage, many Republicans have privately said they hope he will fade away, after a tenure in which the party lost both houses of Congress and the White House. 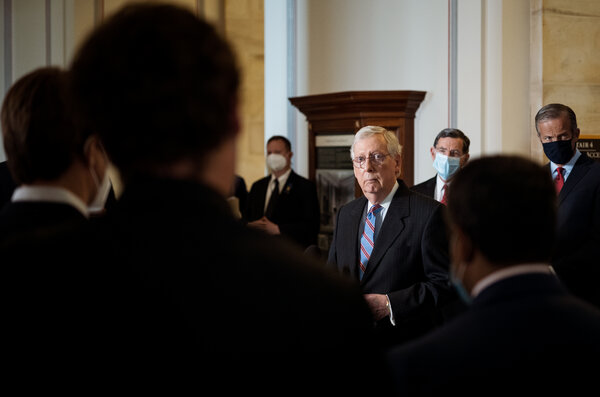 “It is Groundhog Day,” said Tim Miller, a former adviser to Jeb Bush, the only candidate to repeatedly challenge Mr. Trump during the early stages of the Republican presidential primaries in 2016.

“I always thought that was like a rational choice in 2015,” Mr. Miller said, referring to the instinct to lay back and let someone else take on Mr. Trump. “But after we all saw how the strategy fails of just hoping and wishing for him to go away, nobody learned from it.”

Throughout that campaign, one candidate after another in the crowded field tried to position themselves to be the last man standing on the assumption that Mr. Trump would self-destruct before making it to the finish line.

It was wishful thinking. Mr. Trump attacked not only Mr. Bush but several other candidates in deeply personal terms, including Senator Marco Rubio of Florida, Senator Ted Cruz of Texas and the businesswoman Carly Fiorina. Only Mr. Bush sustained a response, though he eventually left the race after failing to gain traction; Mr. Cruz, in particular, told donors during a private meeting in late 2015 that he was going to give Mr. Trump a “big bear hug” in order to hold onto his voters.

They all tried to avoid being the target of his insults, while hoping that external events and news media coverage would ultimately lead to his downfall. Instead, Mr. Trump solidified his position as primary voting began.

“He intimidates people because he will attack viciously and relentlessly, much more than any other politician, yet somehow people crave his approval,” said Mike DuHaime, who advised former Gov. Chris Christie of New Jersey in that primary race. Mr. DuHaime recalled Mr. Trump attacking Mr. Bush’s wife in one debate, only for Mr. Bush to reciprocate when Mr. Trump offered a hand-slap later in that same debate.

“Trump did self-destruct eventually, after four years in office,” Mr. DuHaime said. “But he can still make or break others, and that makes him powerful and relevant.”

Even John Boehner, the former speaker of the House whose criticisms of Mr. Trump in his memoir, “On the House,” have garnered national headlines, told Time magazine this week that he voted for Mr. Trump in 2020 — well after the former president had spent months falsely suggesting the election would be corrupt.

In his speech before R.N.C. donors on Saturday night, Mr. Trump, in addition to attacking Mr. McConnell, also criticized a host of perceived enemies from both parties; among his targets was former Vice President Mike Pence, whose life was in danger on Jan. 6 because he was in the Capitol to certify the electoral votes. Mr. Trump reiterated that Mr. Pence, who recently signed a book deal, should have had “the courage” to send the electoral vote tallies back to the states, despite the fact that the vice president had made clear that he did not think he had the authority to do so.

Jason Miller, an adviser to Mr. Trump, disagreed with the comparison to 2015, saying that Mr. Trump had more dominance over the base of the Republican Party now than he did then, according to public polling, and a greater number of senior Republican officials speaking out against him five years ago.

“In 2021, there are no candidates trying to take out President Trump, just some occasional sniping from menthol-infused nitwits like John Boehner,” he said.

Still, Mr. Trump does not have the complete control over the party that he did during four years in office.

And not all Republicans think that ignoring Mr. Trump is a mistake. One senior party member, speaking on the condition of anonymity because he didn’t want to engage in a lengthy back and forth with Mr. Trump, said that with the former president out of office and off Twitter, his reach is limited.

The Republican said there had been anecdotal evidence from members of Congress during the recess that Mr. Trump was less omnipresent for voters in their districts than he had previously been.

While Mr. Trump was ascendant in 2015 and 2016, said an adviser to another Republican who may run in 2024, that wasn’t the case now. And if party leaders fight with him publicly or try to take him on, it could only strengthen him, the Republican argued, giving him more prominence.

What’s more, the first senior Republican argued, Republican lawmakers have found common cause not just in battling President Biden’s policies but in the backlash to the Georgia voting rights law. Those fights have continued without Mr. Trump, and will accelerate, the Republican said, without being driven by the cult of personality around the former president.

Other Republicans are privately hopeful that the criminal investigation into Mr. Trump’s business by the New York district attorney, Cyrus Vance Jr., will result in charges that hobble him from running again or even being a major figure within the party. People who have spoken with Mr. Trump say that he is agitated about the investigation.

While all of that may represent just a slow turn away from Mr. Trump, those Republicans believe the turn has begun.

David Kochel, a Republican strategist and supporter of Mr. Bush during the 2016 campaign, sounded less optimistic.

He noted that even the horror of Jan. 6 did not break the hold Mr. Trump has on other elected officials, and that several anchors on Fox News — the largest conservative news outlet — had consistently downplayed the attack on air, numbing viewers to what took place as time passes.

In an interview on Fox News with the host Laura Ingraham late last month, when asked about the security around the Capitol, Mr. Trump said: “It was zero threat right from the start. It was zero threat.”

He added: “Some of them went in and there they are hugging and kissing the police and the guards. You know, they had great relationships. A lot of the people were waved in and then they walked in and they walked out.”

Mr. Kochel said Jan. 6 was “being stuffed down the memory hole” with the help of Fox News, noting that the strategy of waiting out Mr. Trump and hoping he fades away has had a less-than-perfect history of being effective.

“We’ve seen this movie before — a bunch of G.O.P. leaders all looking at each other, waiting to see who’s going to try and down Trump,” he said.

Sir Keir Starmer is attempting to exploit the row over the 1% NHS pay offer in elections on “super Thursday”, by claiming “a vote for Labour is a vote to support our nurses”. He is launching his party’s campaign for elections in England, Scotland and Wales on 6 May, the biggest poll since the general […]

The Green Party are aiming to replace the Liberal Democrats as England’s third party after significant gains in the local elections. They won 88 more seats, compared to the Lib Dems’ increase of seven. Yet the Greens are far from matching their rival party’s representation in local government. 586 Liberal Democrat councillors were elected last […]

Convicted criminals from EU countries will be banned from entering Britain from 1 January, under plans to be presented to MPs later. Once the UK’s Brexit transition period ends and it is no longer bound by the bloc’s rules on free movement, foreign criminals sentenced to at least one year in jail will be prevented […]