BBC Weather forecaster Tomasz Schafernaker has predicted freezing temperatures across the nation. While Mr Schafernaker said there may be spikes of warmer weather during the day he predicted they would stay only briefly and warned snow could develop in some parts of Wales and the Midlands. He added that temperatures are “well below par” for this time in the year.

Speaking to BBC Breakfast, Mr Schafernaker said: “It feels like we’ve been shot back into winter and some of us are waking up to a fresh covering of snow.

“And guess what, there are more wintry showers in the forecast for today but not everybody’s getting them.

“In fact, there will be plenty of sunshine around today but let’s focus on the wintry showers.

“We’ve seen snow in the last few hours drifting in from the north some around the North Sea coast certainly Scotland and a few around in Manchester. 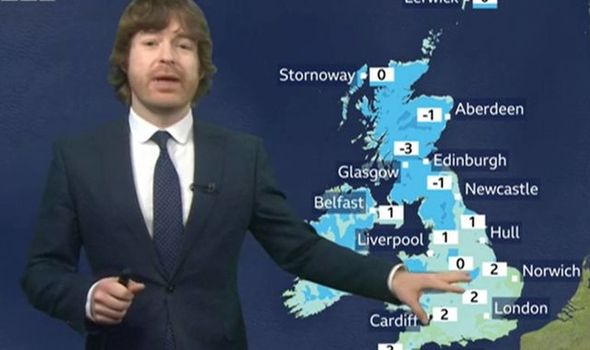 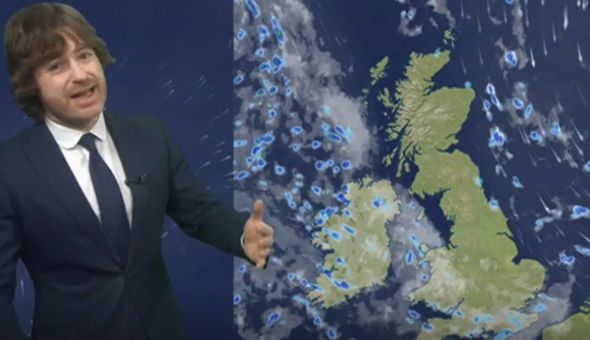 “Salford has seen a little bit of winter too and at eight o’clock on [Sunday] morning, the temperatures will still be close to freezing so anything that falls out of the sky anything wintry may well settle here.

“But notice that you see a lot of land here [on the forecast] so skies are going to be clear across a large chunk of the country.

“You might wonder how can it snow if it’s eight degrees if that’s the high temperature, remember that’s only very briefly.

Owain Wyn Evans does the weather with feet in ice bucket 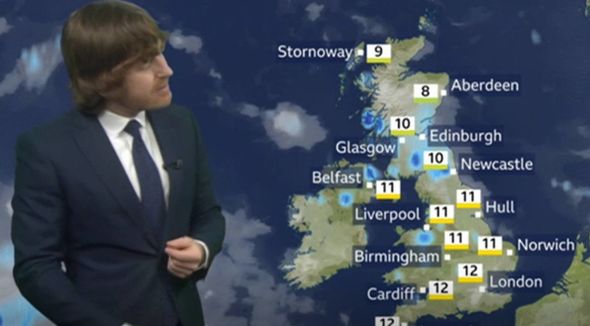 “[Sunday] afternoon, there’s a lot of deep cold air in the atmosphere overall so when the showers go through the temperature drops and we get a bit of snow and actually tonight we could see some snow around parts of Wales maybe Merseyside, into the Midlands as well.

“Early morning temperatures on Monday will be around freezing so once again tomorrow so we could see some fresh snow settling.”

He added: “Now Monday, you can see the scale of the cold outbreak into parts of western and central Europe and it’s still with us.

“We’ll see some ever so slightly milder air nudging in off the continent on Monday but it really is going to be a very slight fine day I think for the bulk of the UK. 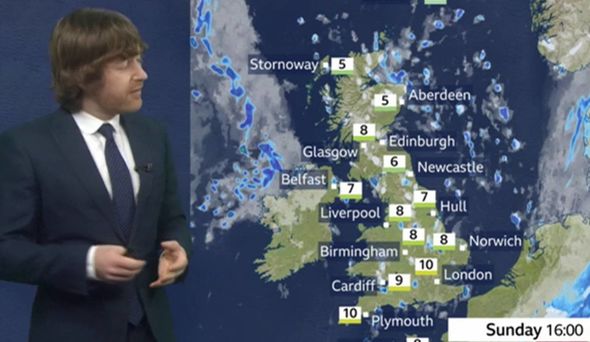 “Out towards the west may be increasing amounts of cloud with little bits and pieces of rain and you can see these temperatures sort of nudging back up to around nine to 12C across the West and the southwest of the UK.

“For things to turn warmer, we need southerly winds and then towards the end of the week, we’re actually expecting high pressure to build.

“So that means there’s very little wind so there’s nothing coming our way.

“So whatever air we have sits over us so temperatures may be just around 10 to 12C which is below par for the time of the year.

“There could be some showers around too and that’s really the trend for the week just a very gradual rise in the temperatures by Wednesday maybe peaking at around 13C or 14C.

“But there’s clear indications that as we head towards the end of the week ahead those temperatures may well be going back down again.”

BEIJING (Reuters) – China’s economic recovery is accelerating but the coronavirus outbreak situation in the epicentre of Hubei province and its capital Wuhan is still dire, the ruling Communist Party’s Politburo said on Wednesday according to a state television report. China cannot ignore the risks of a coronavirus epidemic resurgence in certain regions, the report […]

“I am an expert bomb maker. I can make bombs in just five minutes.” Ali Fauzi was a key member of Jemaah Islamiyah, a militant group with links to al-Qaeda, which was responsible for Indonesia’s worst attack – the 2002 Bali bombing that killed more than 200 people. “My brothers carried out the Bali bombing. […]

The Government manager and the spy cam: Offender claims ‘miscarriage of justice’ in Supreme Court bid to keep name secret

As Germany reels from coronavirus, some officials debate impact on banks

Emerging market turmoil may bring FX controls back on radar