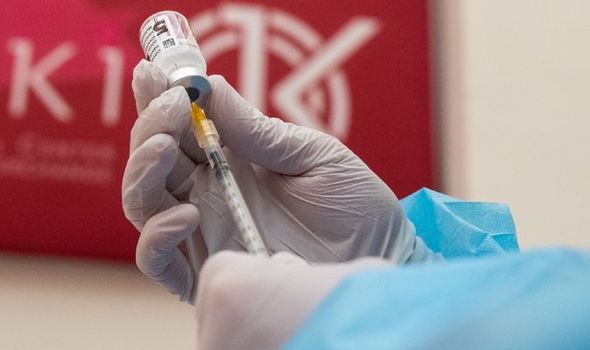 The European Medicines Agency (EMA) EU drug regulator found no specific risk factors, including age, for the AstraZeneca Covid jab, but said it was carrying out further analysis. This comes amid a bitter row between the UK and the bloc over coronavirus vaccine supplies.

EMA executive director Emer Cooke said in a statement: “EMA is of the view that the benefits of the AstraZeneca vaccine in preventing COVID-19, with its associated risk of hospitalisation and death, outweigh the risks of side effects.

“A causal link with the vaccine is not proven.”

He added how they will continue to look at any evidence and will provide another update next week.

The AstraZeneca vaccine – which was developed with Oxford University – was approved for use by EU regulators earlier this year.

Germany, France, Italy and Spain all halted the use of the vaccine amid growing concerns as EU member states have recorded a number of blood clots after the vaccine was administered to patients.

Portugal, Slovenia, Cyprus, the Netherlands, Ireland, Denmark, Sweden, Romania, Latvia, Austria, Lithuania, Luxembourg and Bulgaria also all halted the inoculation of the jab, despite advice from the EMA.

Iceland and Norway, who are both not members of the EU but have joined the European Economic Area (EEA), also halted the AstraZeneca vaccine.

The row between the UK and the EU has been escalating since the Commission threatened Britain with a ban on vaccine exports.

At the end of January, a row over coronavirus vaccine supplies prompted the EU to use the “nuclear” option of invoking Article 16.

This is part of the Northern Ireland Protocol which governs the island’s trading arrangements with the EU and Great Britain.

Just last week, European Commission President Ursula von der Leyen threatened to ban the AstraZeneca vaccine – which was developed with Oxford University – from being exported from the continent.

She said the pharmaceutical company must “catch up” on deliveries to the EU before they export to other countries.

Mrs von der Leyen said: “I think it is clear that first of all the company has to catch up.

“[It] has to honour the contract it has with European member states before it can engage again in exporting vaccines.

“We want to explain to our European citizens that they [can] get their fair share.”

Mr Johnson warned the “blockades” were “not sensible”.

The EU’S glacial vaccine rollout has been widely criticised by its own member states.

This week, Ireland’s Taoiseach Micheal Martin hit back at the bloc and accused them of holding them back.

He said: “Every effort has been made to ensure that almost all doses are injected into people in the same week that they arrive, but disruptions to supply – to Ireland and throughout Europe – have held us back.

“Indeed, the only thing that is holding us back is supply.”

To date, just 11.3 percent of adults aged 18 and above have received their first dose of a coronavirus vaccine across the EU.

Only 4.9 percent of adults from 30 EU countries have been fully vaccinated.

In comparison, more than half of the adult population in the UK have received their first dose of a vaccine as the figure exceeds 30,000,000.

Coronavirus: Bundesliga is back, but when will other top-tier sport return?

Two months after the season was curtailed by coronavirus, the Bundesliga is back and spearheading a return for top-tier sport. While any comeback for football, cricket and Formula 1 may present some moral quandaries given the ongoing threat posed by the COVID-19 pandemic, plans are afoot for a resumption in play. As summer looms on […]

A "gentle giant" retail worker has died the day after testing positive for coronavirus. Carl Handley, from Rhyl, north Wales, was described as a "funny, lovely and wonderful" man by his family, Wales Lives reports. The 52-year-old, who worked at a B&M discount store, was also called a "gentle giant" by pals. He had symptoms […]

Early weather signs indicate the possibility of a pleasant day for weather on Remembrance Sunday. The day is one of the country's most important events in the calendar, where people up and down the nation mark their respect for those who died fighting in all wars. Services take place up and down the UK and […]