LONDON — China’s crackdown on companies that decline to back down from removing Xinjiang cotton from their supply chains due to alleged forced labor claims by Western nations continued to brew over the weekend.

H&M’s blackout treatment is now being extended from online removals from e-commerce, mapping and ride-hailing platforms to at least six physical stores being closed in cities such as Urumqi, Yinchuan, Changchun and Lianyungang. In a video circulating on Weibo, H&M’s billboards can be seen being removed from a mall’s facade, and the brand’s storefront logos being covered with A4 paper. Some of the mall operators said the decision to shutter was made by the landlords.

Huawei on Monday said it has suspended downloads of sportswear brands Nike and Adidas from its app store, but Chinese users can still download those brands from other platforms, such as Apple.

The German brand earlier said on Weibo that it would “continue to purchase and support Xinjiang cotton,” but the post was later deleted. Hugo Boss told Bloomberg that comment was “unauthorized.” A separate statement on its website then said the company does not tolerate forced labor and “has not procured any goods originating in the Xinjiang region from direct suppliers.” 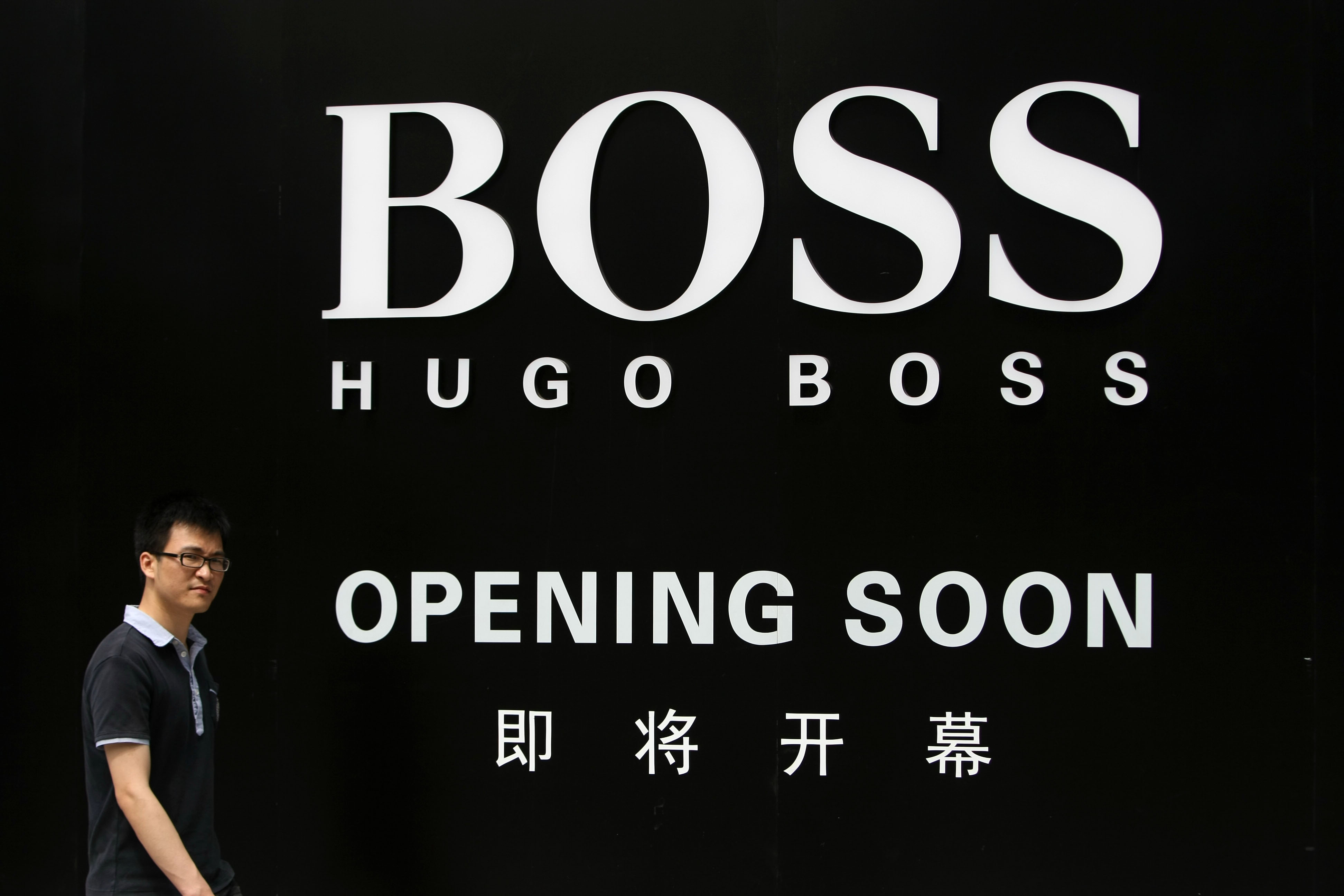 A pedestrian walks past an advertisement for Hugo Boss in Shanghai. Weng lei – Imaginechina.AP

With more than 40 major Chinese celebrities cutting ties with some of the biggest fast-fashion and ready-to-wear brands, the local fashion industry is cautiously accessing the situation.

For one, it’s unclear whether brands will pursue legal action against the stars for terminating their contracts. There are rumors that Adidas is asking Hong Kong singer Eason Chan to pay 60 million renminbi, or $9.22 million, for dropping the brand. Chan also faced backlash in Hong Kong and Taiwan for his action. The two regions hold a different view on the issue compared to mainland China.

A publisher of a Chinese edition of an American fashion title told WWD under the condition of anonymity that the magazine has decided not to feature any of the involved brands in coming issues. Some photo shoots are being replanned as well.

The recent actions will have a major impact on these brands’ event planning throughout 2021, a founder of a Beijing-based communication and production agency said.

China has become the market for global product debuts since the pandemic, but now brands such as Nike, Adidas, H&M, Uniqlo, Converse, Puma, Calvin Klein, Tommy Hilfiger, New Balance, Burberry and Hugo Boss will find it difficult to lock down celebrities, influencers and editors to attend their events, and landlords may not even lease the space to them, the person added.

For example, Nike’s annual Airmax Day event, which was last Friday, was canceled in Shanghai. Edison Chan’s brand Clot has also said it will not release its highly anticipated sneaker collaboration with the brand.

However, the special releases of Air Jordan and Dunk Low tied to Airmax Day saw more than 340,000 people signing up for the raffles on its Tmall store.

Also finding it hard to cut ties with these brands are Chinese sports teams. With the Tokyo Olympics only a few months away, Chinese sports stars have largely remained silent. Last year, Nike signed a 12-year deal with the Chinese Athletic Association. The brand also has deep ties with China’s national soccer and basketball teams.

Last Friday, the Biden administration accused China of “a state-led social-media campaign and corporate and consumer boycott against companies, including American, European and Japanese businesses.”

“We commend and stand with companies that adhere to U.S. laws and ensure that products we are consuming are not made with forced labor,” State Department spokeswoman Jalina Porter said during a news briefing.

“We support and encourage businesses to respect human rights in line with the U.N. guiding principles on business and human rights and the OECD guidelines for multinational enterprises,” she added.

Wu Yan, the head of the Better Cotton Initiative’s Shanghai branch, said on China’s state broadcaster CCTV that: “In response to overseas claims about forced labor concerns in Xinjiang, we have repeatedly conducted stringent inspections and submitted two of our investigation reports and compiled years of reports from third-party visits. We have also repeatedly told international non-government organizations as well as other stakeholders that we haven’t identified one single case of forced labor.”

But it appears that the organization is internally divided over the issue. Last October, the Geneva-based BCI said it was withdrawing from the Xinjiang region over concerns about the alleged use of forced labor by incarcerated Uyghur Muslims.

“China is no longer the China of 1840, and the era when Chinese people suffered from great power hegemony, and bullying will never return again. We hope that businesses like H&M will be more clear-eyed and distinguish right from wrong,” he added.

SINGAPORE – Singapore will continue to prioritise developing local workers as the financial services sector expands, said Manpower Minister Josephine Teo on Wednesday (Jan 27). Mrs Teo noted that this will allow Singaporeans to deepen their expertise and access new opportunities while Singapore-based firms can expand alongside a growing talent pool. Around 1,300 local workers […]

FILE PHOTO: Federal Reserve Board building is pictured in Washington, U.S., March 19, 2019. REUTERS/Leah Millis/File Photo(Reuters) -Federal Reserve Bank of San Francisco President Mary Daly said the U.S. central bank may be able to start reducing “a little bit” of its extraordinary support for the U.S. economy by the end of this year. “The […]

BENGALURU (Reuters) – The Federal Reserve’s preferred inflation gauge would have to hit a high of 2.8% to discomfort U.S. policymakers, according to a Reuters poll which also suggested the central bank would tolerate that rate for three months at least before it acts.FILE PHOTO: Shoppers carry bags of purchased merchandise at the King of […]

Bill Gates steps down from Microsoft board

Debate in the time of coronavirus: An elbow bump greeting for Biden and Sanders