The president gave the vice president a prominent role in the politically charged issue at a time when thousands of children are being detained in facilities along the border. 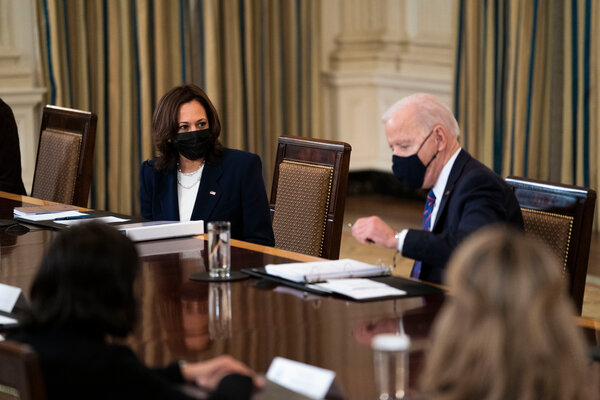 WASHINGTON — President Biden said on Wednesday that Vice President Kamala Harris would lead the administration’s efforts to deter migration to the southwestern border by working to improve conditions in Central America, plunging her into one of the most politically fraught issues facing the White House.

The president said he had directed Ms. Harris to oversee the administration’s plans to pump billions of dollars into the ravaged economies of Guatemala, Honduras and El Salvador. She will work with the leaders of Central American governments to bolster the region’s economy in the hopes of reducing the violence and poverty that often drive families in those countries to seek refuge in the United States.

“While we are clear that people should not come to the border now, we also understand that we will enforce the law,” Ms. Harris said before a White House meeting with top immigration officials. “We also — because we can chew gum and walk at the same time — must address the root causes that cause people to make the trek.”

The announcement underscores the sense of urgency at the border, where the administration has struggled to move thousands of young migrants from detention centers meant for adults into shelters managed by the Department of Health and Human Services. Republicans, who have seized on the images to make a case that Mr. Biden’s immigration agenda is only attracting more people from the region, have vowed to put the issue at the center of their efforts to retake power in Congress next year.

Mr. Biden, however, has continued to use a pandemic emergency rule to rapidly turn away most migrants at the border. Even though an appeals court allowed the United States to resume expelling minors, Mr. Biden has elected to welcome them into the country, where they must be kept in custody until they can be released to sponsors.

For Ms. Harris, the diplomatic assignment is likely to be challenging. Previous efforts, including one led by Mr. Biden when he was vice president, were largely unsuccessful, as critics charged that corrupt leaders there had not effectively spent foreign aid money. In the years since, a majority of the families crossing the border have traveled from Central America, seeking economic opportunity, safety from gangs and reunions with family members already in the United States.

We will use your email address only for sending you newsletters. Please see our Privacy Notice for details of your data protection rights. Trade Secretary Liz Truss hailed the UK’s agreement with Ivory Coast, saying it would “provide continuity for business and opportunities for the future”. Her praise for the pact came as negotiations with […]

We use your sign-up to provide content in ways you’ve consented to and to improve our understanding of you. This may include adverts from us and 3rd parties based on our understanding. You can unsubscribe at any time. More info They voted 272 votes to 246 – a majority of 26 – in favour of […]

Chile economic activity down 3.3% in November as mining slumps

More condo and HDB units rented out in January 2021: SRX

This is another News Portal > World News > Scandalous! Macron rival accuses President of squandering taxpayer cash on own campaign