According to federal officials, an independent panel of medical experts said the promising results announced by the company on Monday may have relied on “outdated information.” 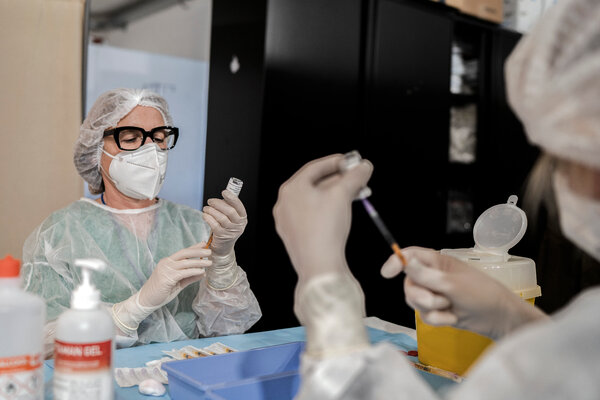 By Rebecca Robbins and Sheila Kaplan

Federal health officials said early Tuesday that results from a U.S. trial of AstraZeneca’s Covid-19 vaccine may have relied on “outdated information” that “may have provided an incomplete view of the efficacy data,” casting doubt on an announcement on Monday that had been seen as good news for the British-Swedish company as well as the global vaccination drive.

In a highly unusual statement released after midnight, the National Institute of Allergy and Infectious Diseases said that the data and safety monitoring board, an independent panel of medical experts under the National Institutes of Health that has been helping to oversee AstraZeneca’s U.S. trial, had notified government agencies and AstraZeneca late Monday that it was “concerned” by information the company had released that morning.

The institute urged AstraZeneca to work with the monitoring board “to review the efficacy data and ensure the most accurate, up-to-date efficacy data be made public as quickly as possible.”

AstraZeneca did not immediately return a request for comment early Tuesday.

In a news release on Monday announcing the results of the U.S. trial, the company said that the vaccine it developed with the University of Oxford was 79 percent effective against Covid-19, higher than observed in previous trials, and completely prevented the worst outcomes from the disease. The long-anticipated results were seen as encouraging global confidence in the vaccine, which was shaken this month when more than a dozen countries, mostly in Europe, temporarily suspended the shot’s use over concerns about possible rare side effects.

In recent days, the monitoring board’s analysis was delayed several times because the board had to ask for revised reports from those handling trial data on behalf of the company, according to a person familiar with the matter who was not authorized to discuss it publicly.

Companies sponsoring drug or vaccine trials typically wait for the monitoring board to run analyses and conclude that the study has yielded an answer before they announce trial results. During the trial, an unblinded statistical analysis group that is walled off from the company acts as an intermediary to handle data requests and many other interactions with the monitoring board.

OPINION: There was once a time when New Zealand Prime Ministers and Trade ministers would have shouted cock-a-hoop the news that China had finally applied (via NZ) to join the massive CPTPP trade bloc. Certainly not be the ultimate and quite timorous fence-sitters when it comes to big moves on trade. But the Chinese move […]

NEW YORK (Reuters) – U.S. stocks tumbled on Monday in thin trade, with the S&P 500 posting its biggest daily decline in four weeks, as soaring coronavirus cases and uncertainty about a fiscal relief bill in Washington dimmed the outlook for the U.S. economic recovery. The United States, Russia and France set daily records for […]

Battling the Mob, a Black Officer Came Face to Face With Racism