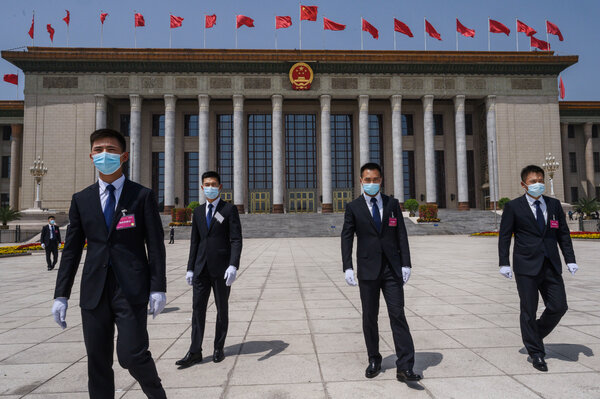 Sometimes a comedian cuts through foreign policy issues better than any diplomat. Bill Maher did that the other week with an epic rant on U.S.-China relations, nailing the most troubling contrast between the two countries: China can still get big things done. America, not so much.

For many of our political leaders, governing has become sports, entertainment or just mindless tribal warfare. No wonder China’s leaders see us as a nation in imperial decline, living off the leftover fumes of American “exceptionalism.” I wish I could say they were all wrong.

“New Rule: You’re not going to win the battle for the 21st century if you are a ‘silly people.’ And Americans are a silly people,” said Maher. “That’s the classic phrase from ‘Lawrence of Arabia’ — when Lawrence tells his Bedouin allies that as long as they stay a bunch of squabbling tribes, they will remain ‘a silly people.’ …

“We all know China does bad stuff. They break promises about Hong Kong autonomy; they put Uyghurs in camps and punish dissent. And we don’t want to be that. But it’s got to be something between authoritarian government that tells everyone what to do and a representative government that can’t do anything at all.”

Maher added: “On a national level, we’ve been having Infrastructure Week every week since 2009, but we never do anything. Half the country is having a never-ending ‘woke’ competition. … The other half believes we have to stop the lizard people, because they’re eating babies. … China sees a problem and they fix it. They build a dam. We debate what to rename it.”

Yes, China has huge problems. Its leaders are not 10 feet tall, but they are focused on real metrics of success. “China’s leaders are fierce but fragile,” argues James McGregor, the chairman of the consultancy APCO Worldwide, Greater China. “Precisely because they were not elected, they wake up every day scared of their own people, and that makes them very focused on performance” — particularly around jobs, housing and clean air.

By contrast, many U.S. politicians these days are elected from safe, gerrymandered districts and seek to stay in power by just “performing” for their base with populist theatrics.

Whenever I point this out, critics on the far right or far left ridiculously respond, “Oh, so you love China.” Actually, I am not interested in China. I care about America. My goal is to frighten us out of our complacency by getting more Americans to understand that China can be really evil AND really focused on educating its people and building its infrastructure and adopting best practices in business and science and promoting government bureaucrats on merit — all at the same time. Condemning China for the former will have zero impact if we’re not its equal in all of the latter.

At last week’s Alaska meeting between America’s and China’s top diplomats, Chinese officials made it quite clear that they no longer fear our criticism, because they don’t respect us as they once did, and they don’t think the rest of the world does, either. Or as Yang Jiechi, China’s top foreign affairs policymaker, baldly told his U.S. counterparts: “The United States does not have the qualification … to speak to China from a position of strength.”

Surprised? What did you think, that the Chinese didn’t notice that our last president inspired his followers to ransack our Capitol, that a majority of his party did not recognize the results of our democratic election, that a member of our Congress believes that Jewish-run space lasers cause forest fires, that left-wing anarchists were allowed to take over a section of downtown Portland, creating havoc for months, that during the pandemic the U.S. printed money to help its consumers keep spending — much of it on Chinese-made goods — while China printed money to invest in even more infrastructure, and that gun violence in America is out control?

LONDON (Reuters) – SoftBank-backed online education firm Kahoot is planning to launch a main market listing on the Oslo bourse in the coming weeks, with the company valuation pegged at $7 billion, two sources familiar with the matter told Reuters.FILE PHOTO: SoftBank Corp’s logo is pictured at a news conference in Tokyo, Japan, February 4, […]

Can the new head of U.S. foreign aid make America good again? By Michelle Goldberg Opinion Columnist In her 2019 memoir, “The Education of an Idealist,” Samantha Power, who emigrated from Ireland as a child, described how she knew, even before being naturalized, that she had become an American. “I now thought like an American, […]

MUMBAI (Reuters) – Indian hospitality startup Zostel has asked the market regulator to reject an application from SoftBank Group-backed rival Oyo Hotels and Rooms to go public due to a legal tussle between the firms over a deal that fell apart six years ago.FILE PHOTO: The logo of OYO, India’s largest and fastest-growing hotel chain, […]