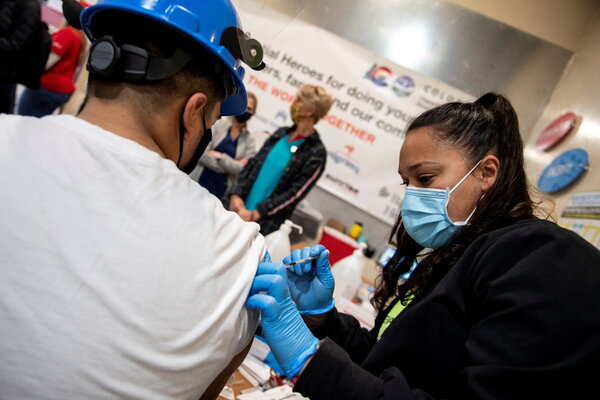 Employees at food processing facilities, which had some of the country’s largest known coronavirus outbreaks early in the pandemic, are now eligible for vaccines in at least 26 states, a New York Times survey found.

The expansion of vaccines to food processing workers comes amid rapid widening of eligibility, especially for essential workers at greater risk of contracting the virus. Almost every state is vaccinating some subset of frontline workers, but the list of eligible professions varies widely. In at least six states, food processing workers are eligible in certain counties but not in others.

Meat and poultry processing facilities have largely remained open even as large outbreaks infected thousands of workers and killed dozens in the first months of the pandemic. The virus started to spread rapidly in meatpacking facilities as assembly-line workers stood side by side in tight quarters.

A JBS USA pork production plant in Worthington, Minn., with more than 700 recorded coronavirus cases held a mass vaccination event on Friday. JBS USA, a subsidiary of JBS S.A., a Brazilian company that is the world’s largest meat-processing firm, has offered employees who receive the vaccine $100 incentives.

“There was a lot of skepticism among members, for a lot of different reasons,” said Matt Utecht, who represents the Worthington workers as president of the United Food and Commercial Workers Local 663 union. He said union representatives went to the facility repeatedly in recent months to share information about the vaccine, and signed up about 1,500 of the union’s roughly 1,850 members.

“It’s been a daily grind of educating, talking, communicating,” he said.

The production and distribution of vaccines has been steadily ramping up in the United States. The Centers for Disease Control and Prevention said on Saturday that about 79.4 million people had received at least one dose of a Covid-19 vaccine, including about 43 million people who have been fully vaccinated. About 2.25 million doses are given each day on average, up from less than a million two months ago.

With demand for vaccines still outpacing supply, states have faced competing interests in deciding which groups to prioritize. Eligibility opened to many food processing workers in early March across much of the Midwest, where meatpacking and food production are a major part of the economy and often a source of employment for recent immigrants.

In Kansas, where food processing workers are now eligible for the vaccine, nearly 4,000 reported cases have been tied to outbreaks in meatpacking plants, more than in any other setting except long-term care centers and correctional facilities.

“This is a livelihood that supports a number of immigrant populations,” said Marci Nielsen, the Kansas governor’s chief adviser on Covid-19. “And it was very important for the governor to send out a signal that she wants to keep those families safe and to keep these industries open.” 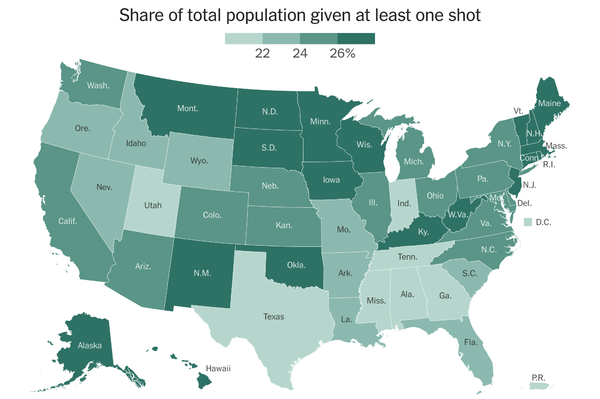 See How the Vaccine Rollout Is Going in Your State

See where doses have gone, and who is eligible for a shot in each state.

By Anna Ringstrom STOCKHOLM (Reuters) – Sweden’s H&M <HMb.ST>, the world’s second-biggest clothing retailer, said on Friday it expected a loss in the second quarter after reporting a 46% plunge in March sales as the coronavirus pandemic took a toll on the retail sector. The virus outbreak that began in China late last year and […]

Revolt of the generals: Trump faces heat from US military leaders

In a historically Republican suburb of Pittsburgh, voters debate whether to give Trump a second term.

The pandemic pushes the start of a major 9/11 trial past the 20th anniversary of the attacks.