BBC Weather: Temperatures set to drop across the UK

March’s weather is becoming increasingly unsettled, with the mild, sunny conditions seen at the beginning of the month replaced by cold, wet and stormy weather fronts. While this week’s forecast sees a return to more settled conditions, long-range weather maps show a wintry spell is forecast to return at the end of the month.

Weather maps by WXCharts forecast plunging temperatures and even a chance of snow over the last weekend of the month.

The forecaster’s snow probability map shows the whole of the UK turn an icy white from 12pm on Saturday March 27, indicating a risk of snow.

Scotland and the north of England have the highest chance of snowfall, at about 40 percent.

The rest of the UK has a lower risk of up to 10 percent, according to the chart. 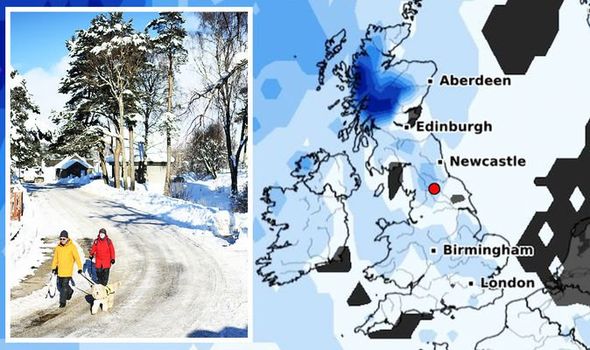 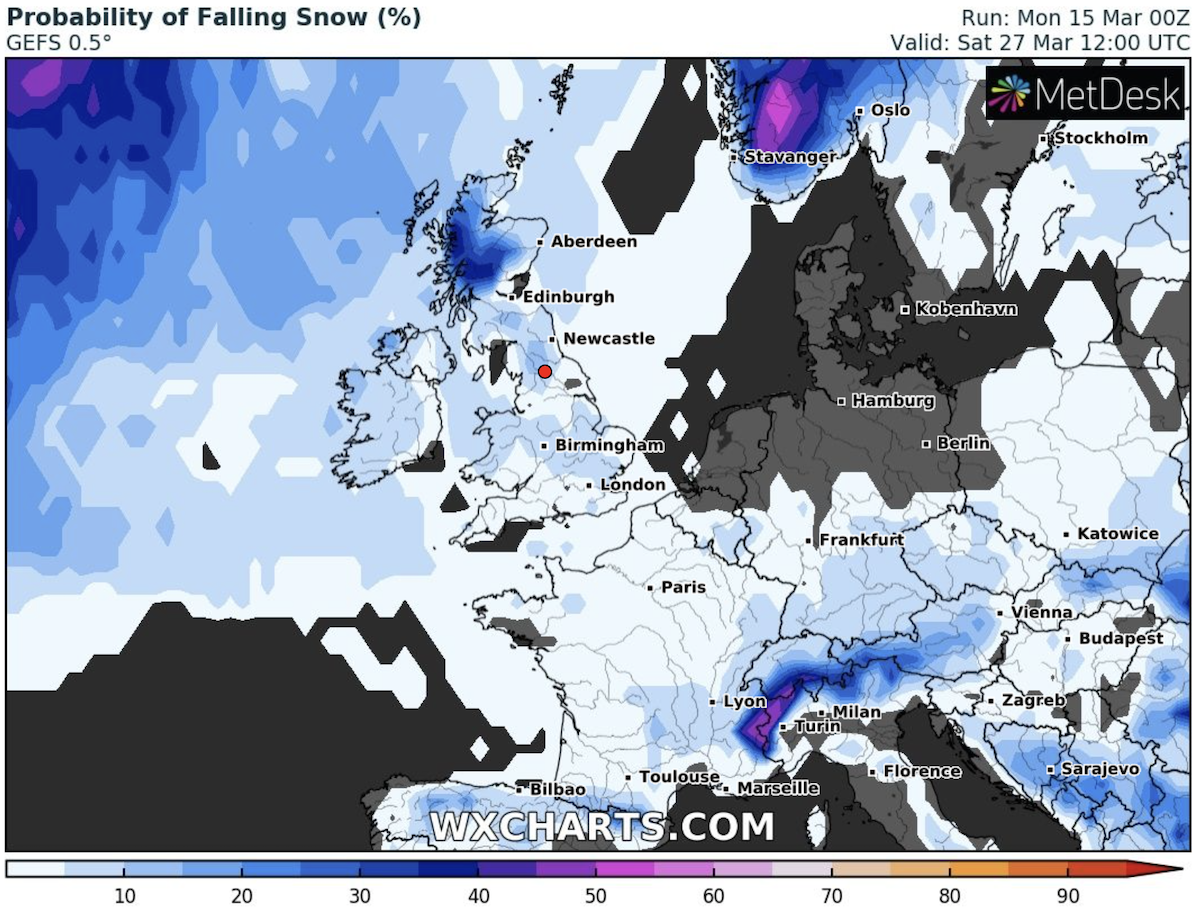 The moderate risk of snow continues through Sunday and Monday, as the UK remains covered by the white and blue charts.

Charts by Netweather also forecast some snow over the last weekend of March.

A map for midnight on Sunday, March 28 shows there is a snow risk in Scotland and parts of Northern England.

Scotland, which is covered by swathes of red, yellow and green has a snow risk of up to 85 percent. 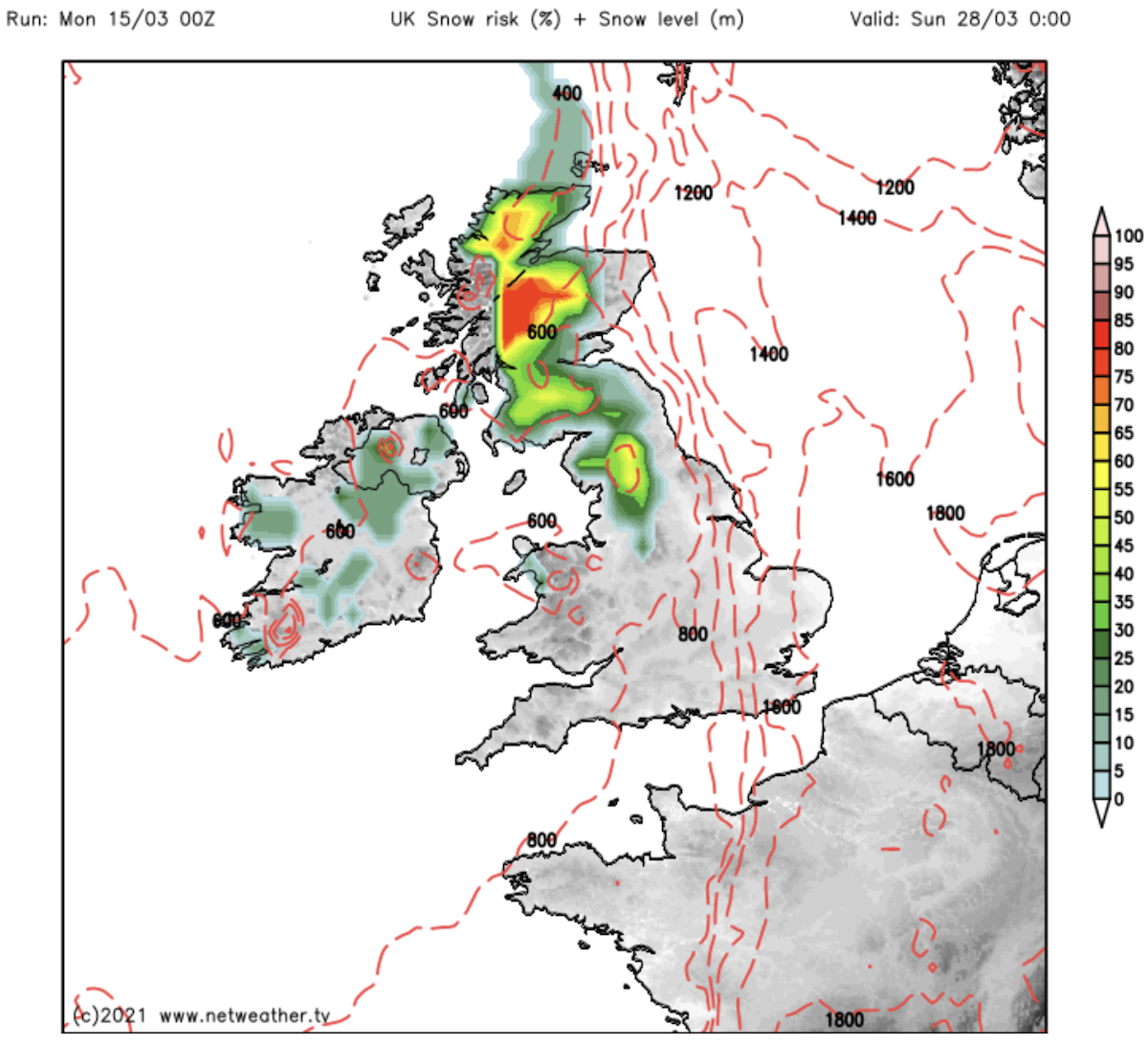 Parts of northern England have a snow risk of up to 60 percent, according to the charts.

The snowy conditions looks set to coincide with a plunge in temperatures.

Charts by Netweather show the mercury will start to drop from the early hours of Saturday March 27, with single digits forecast across the UK.

Temperatures look set to fall markedly on Saturday night, with lows of -2C forecast in Scotland. 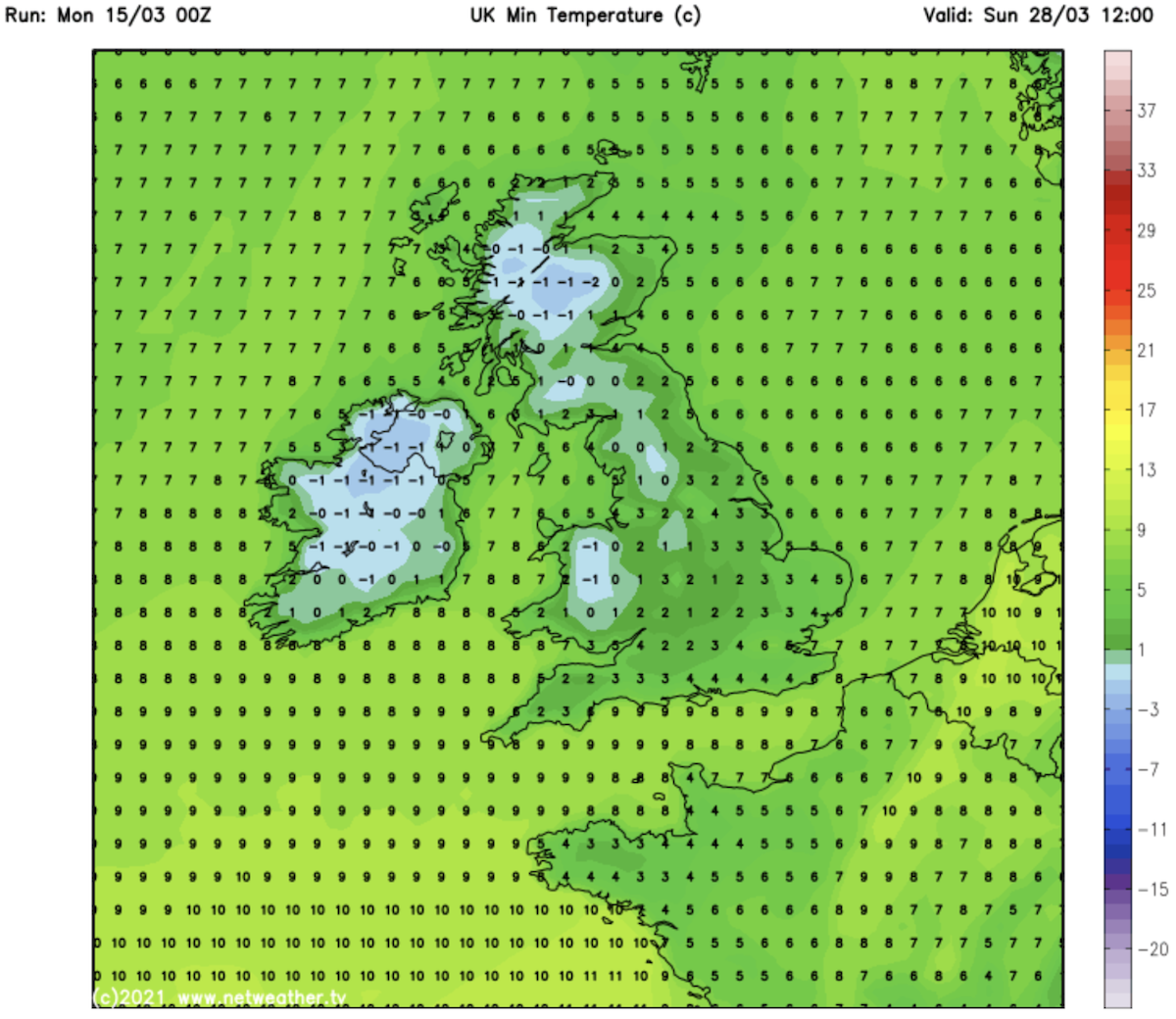 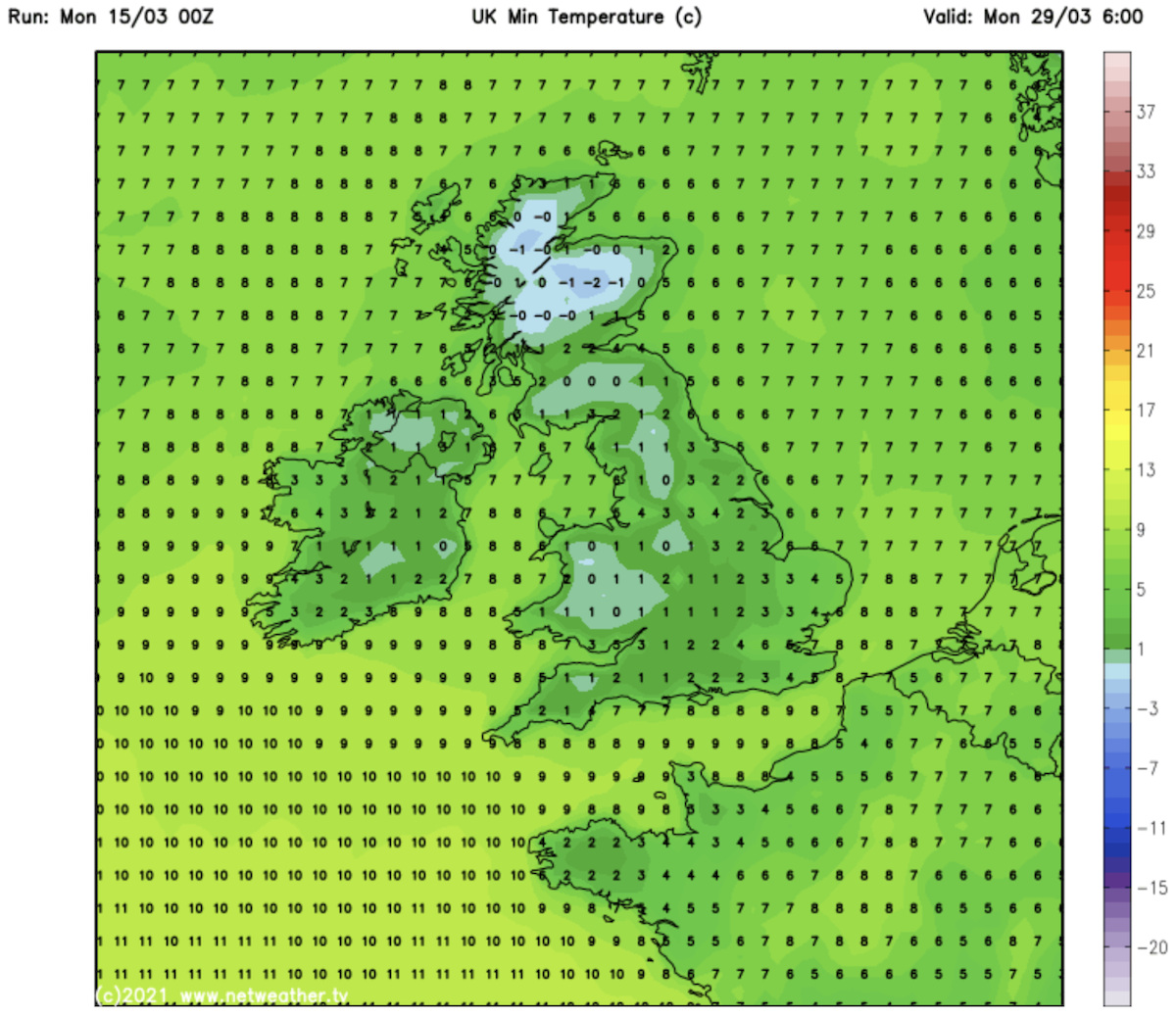 Sunday looks set to remain chilly for most of the day, with -1C forecast in Scotland and Wales, while the rest of the UK will see the mercury struggle to rise above 6C.

The cold temperatures look set to remain through Monday, with -2C forecast again in Scotland at 6am, while the mercury averages at 2C for the rest of the UK.

Temperature maps by WXCharts also show cold conditions are forecast, with the mercury set to range from -1C to -4C.

Met Office forecasters expect the end of the month to be characterised by colder temperatures and unsettled conditions. 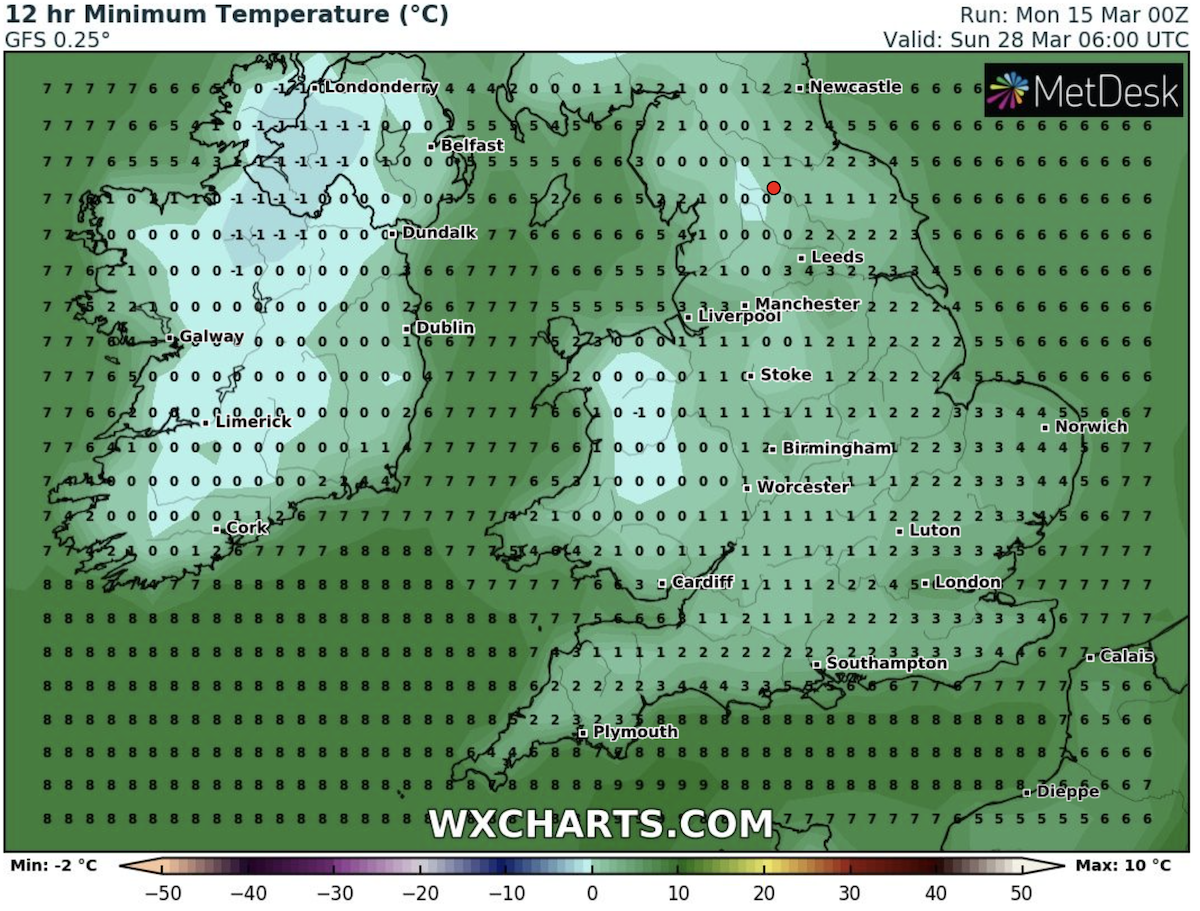 They state: “There is a risk of morning frost and fog patches, particularly in the west.

“Daytime temperatures will potentially be colder than average in the south, particularly the southeast at first, where showers may be wintry at times, and on the milder side elsewhere.

“The end of the period will most likely see another period of unsettled weather, with spells of rain and some strong winds crossing all parts of the UK, interspersed with drier and brighter interludes.

“Temperatures are expected to be at or slightly below average for this time of year by the end of the period.”

A man was left with an extremely painful life-threatening injury after a homeless man slashed him with a broken glass bottle. Leicester Crown Court heard that the 38-year-old victim was just "millimetres from death" after Lee Johnston randomly attacked him. He was sentenced to five-and-a-half years in prison. Johnston was in Leicester in the early […]

By Davide Barbuscia DUBAI (Reuters) – JPMorgan <JPM.N> is seeking to sell at a discount loans raised by the sovereign wealth funds of Saudi Arabia and the United Arab Emirates, according to two sources and a document, as banks brace for a borrowing spree in the Gulf due to low oil prices. Banks tend to […]

The Buttermilk-Brined Turkey of Your Thanksgiving Dreams