Gibraltar is hoping to vaccinate all residents aged 16 and over and its imported workforce – more than 40,000 people in all – by the end of the month, its health minister has said.

The territory, helped by vaccines sent from the UK, is emerging from a two-month lockdown imposed following a surge in COVID cases that left 93 people dead, nearly all of them in January and February.

With more than 15,000 people fully vaccinated and an additional 11,000 waiting for their second dose, people in their 20s are now being called in for their first shots.

Live updates on COVID from the UK and around the world 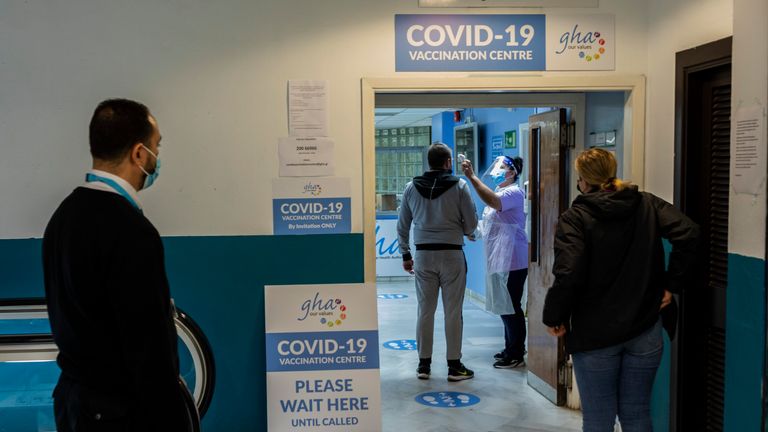 Non-Gibraltarians who come in to work in healthcare or other frontline jobs are already vaccinated, and authorities are now trying to inoculate all the remaining cross-border workers.

More than 4,000 of Gibraltar’s 33,000 residents have been infected, with new virus variants and the compact, high-density geography of the British overseas territory to blame.

But having so many people in a space of just 2.6 square miles (6.7 square km) has also helped Gibraltar’s successful vaccination campaign, with word-of-mouth facilitating the rollout.

Health Minister Samantha Sacramento has warned Gibraltarians not to get carried away just yet.

“Being vaccinated is absolutely no carte blanche to then behave without any restrictions,” she said.

“But then, we also have to go back to being a little bit more human, being able to breathe fresh air. It’s Operation Freedom, but with caution,” she added.

Five shipments of the Pfizer/BioNTech jab which arrived from London have helped the successful vaccine rollout on the narrow British overseas territory stretching between Spain and the mouth of the Mediterranean Sea.

Gibraltarians are itching to get back across to Spain, but there, the slow pace of vaccination makes that problematic, as does the risk posed by new variants.

Mother-of-two and duty-free shop assistant Vanesa Olivero, 40, who suffers from asthma, joked: “Just tell me where and when and I’ll present both of my arms.

“I want all this to be over, to return to normality, to be able to give a hug, to give a kiss, to go for some drinks with friends.”

Officials have been working on contingency plans, including topping up vaccinations with a booster.

As part of the easing of lockdown on the territory, schools have reopened, the night-time curfew has gone back from 10pm to midnight and the order to wear masks in low-density, non-commercial areas has been dropped.

Gibraltar has issued vaccination cards to people who get their second shot.

It is also developing an app storing vaccine data and test results that authorities want to link with other platforms elsewhere to revive international travel, which is so important to its economy.

WASHINGTON (Reuters) – U.S. President Donald Trump said on Tuesday he has asked his cabinet to devise a plan to inject cash into the ailing U.S. oil-drilling industry to help it survive a historic collapse in crude prices. “We will never let the great U.S. Oil & Gas Industry down. I have instructed the Secretary […]

Matt Hancock discusses possible coronavirus vaccine passports The victim from Valencia contracted the virus shortly after receiving the first dose of the Pfizer-BioNTech vaccine on December 29. The second dose of the drug was administered on January 19, three weeks after the first jab. In analysis undertaken by the New England Journal of Medicine, the […]

(Reuters) – Malaysia’s Mahathir Mohamad said on Wednesday, two days after he quit as premier, that an economic stimulus package will be announced soon. A post on Mahathir’s official Twitter account said he had met with finance ministry officials on Wednesday to discuss the stimulus measures. Mahathir had been due to unveil a stimulus package […]

Car packed with Londoners fined after driving to Brighton ‘for takeaway’

L Brands CEO in talks to step aside and sell Victoria’s Secret: WSJ