The Singapore Purchasing Managers’ Index (PMI) – a key measure of factory activity – inched down to 50.5 from 50.7 on January, according to data released on Tuesday (March 2).

A reading above 50 indicates expansion; one below indicates contraction.

The electronics sector remained in expansion territory for the seventh month running, but saw a slight dip to 50.8, against 51 the previous month. It was weighed down by slower expansion rates in new orders, new exports, factory output and inventory.

Ms Sophia Poh, vice-president for industry engagement and development at SIPMM, which publishes the monthly PMI readings, said the supply chain operating environment, which first weakened in the second quarter of last year, has since improved.

“Manufacturers are looking to a brighter outlook with minimal disruption to global supply chains as countries worldwide, including Singapore, started to roll out their vaccination programmes,” she said.

The order backlog index has recorded expansion for eight consecutive months, although it grew at a slower rate, slipping 0.1 point to 50.1 last month.

Meanwhile, the employment index has recorded contractions for 13 consecutive months, although it showed improvement in February when it inched up 0.1 point to 49.9.

However, the electronics employment index recorded expansion for the fourth month running after it first posted contraction in February last year. It climbed 0.2 points to 50.6 last month.

The electronics supplier deliveries index continued to record an expansion for the second month, while the electronics order backlog index has posted growth for eight straight months.

UOB economist Barnabas Gan said the latest PMI data remains supportive of Singapore’s overall growth, as seen from the sustained expansion in both the manufacturing and electronic PMI readings since the second half of last year.

He added that Singapore’s external environment continued to improve, with both exports and imports PMI staying above 50 since the third quarter of last year.

More on this topic

“The improvement in Singapore’s exports especially, will likely further lift manufacturing momentum into the year ahead,” he said.

The labour market is also expected to pick up further, with employment PMI rising for its third straight month, while the accumulation of order backlog suggests that additional resources may be needed to fulfil outstanding orders, he added. 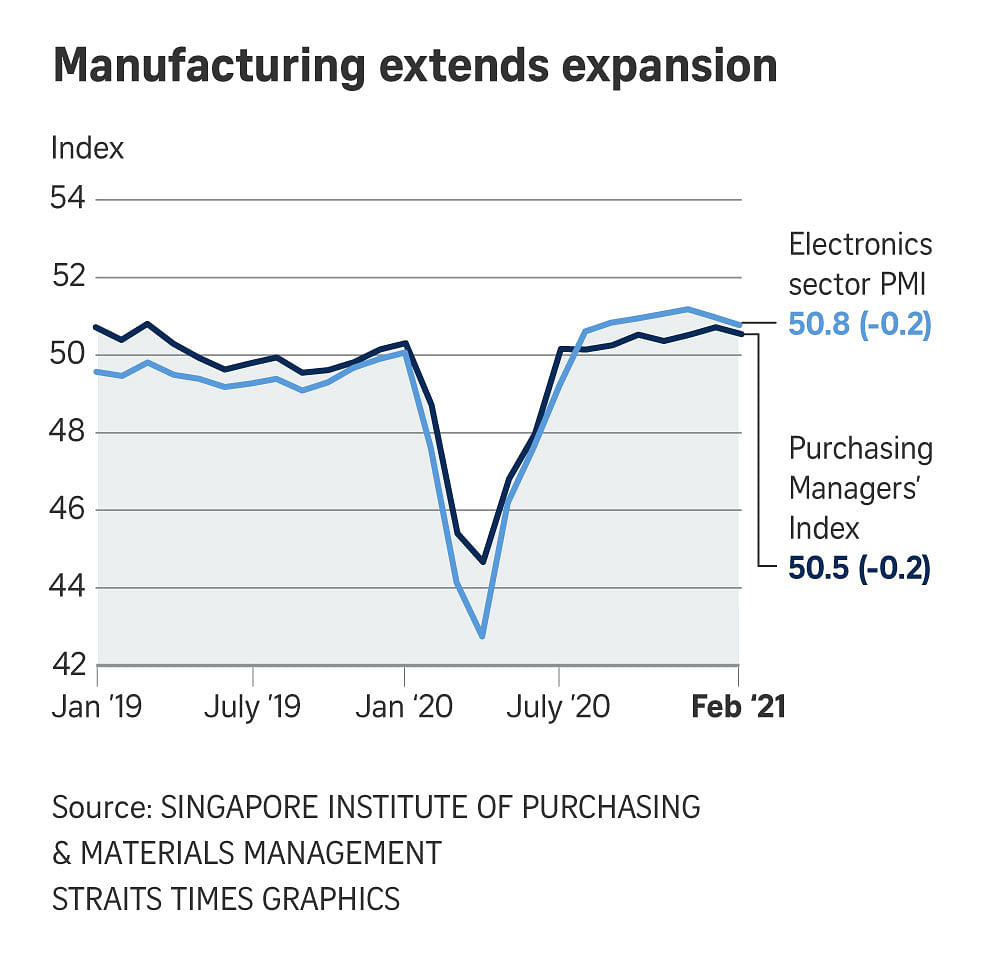 Colorado and Indian state of Karnataka look to business opportunities

Gov. Jared Polis played up Colorado’s expertise in aerospace, biotech, renewable energy and agriculture during a business roundtable to discuss closer commercial ties with India, and in particular with the state of Karnataka. “I am deeply committed to advocating for and growing the relationship between India and Colorado,” Polis told political and business leaders from […]

NEW YORK • Amazon chief executive Jeff Bezos topped Forbes’ list of richest Americans for the third year in a row, while United States President Donald Trump’s ranking dropped as the coronavirus pandemic slammed his office buildings, hotels and resorts, the magazine said on Tuesday. The aggregate wealth of the Forbes 400 list rose to […]

Workers had to fillet fish by hand at food manufacturer Hai Sia Seafood, but this laborious job has been vastly improved as the company transforms digitally. A new fish filleting machine has increased capacity fivefold after staff moved from manual labour to learning to operate the equipment. Hai Sia is just one of many manufacturers […]

Oil slides 1% on renewed fears over toll from coronavirus

Trump: It’s my decision when to reopen U.S. economy

This is another News Portal > World News > RCMP release photos, video of persons of interest in fisheries fire