Piling on charges in Myanmar. 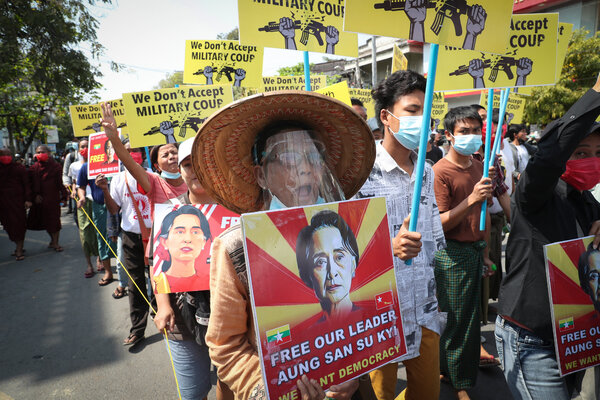 New charges and resistance in Myanmar

As the military rulers in Myanmar escalated a crackdown on protests, new charges were brought against Daw Aung San Suu Kyi, the civilian leader who was deposed in the coup. The civil disobedience movement is now entering its second month.

She now faces up to nine years in prison. U Win Myint, the deposed president who also appeared in court, faces up to five years. The hearing was held behind closed doors, and a lawyer for Ms. Aung San Suu Kyi said he was blocked from attending.

The protests: Security forces continued to crack down on Monday, but on a lesser scale than the day before, which was the deadliest day of protests in the country since the coup: 19 people were killed. Attacks on demonstrators were reported in Yangon, where thousands gathered, but there were no apparent casualties.

Quotable: For the sister of a woman killed on Sunday, “It’s heartbreaking to see my nephew asking when his mother will come and sleep with him again.”

China has charged ahead with an effort to remake the way that government-backed money works, rolling out its digital currency, eCNY, with different qualities from its cash or digital deposits.

Testing of the eCNY began last year in four cities and was recently expanded to bigger cities, such as Beijing and Shanghai. The government has not said if and when it will roll out the eCNY nationwide, but several officials have said it could be ready for tourists at the 2022 Olympics in Beijing.

Effect: No other major power is as far along as China with a homegrown digital currency. The move could make it easier for the government to track financial transactions.

Quotable: “If I cannot buy you a coffee without the government knowing about it, I do worry about what this could mean,” said the former head of the International Monetary Fund’s China division.

Related: A study by a company that monitors the use of the internet by states shows that, as Chinese and Indian troops clashed at the border last year, Chinese malware flowed into the Indian electrical grid. The findings lend weight to the idea that a broad Chinese cyber-campaign may have been behind a major blackout in Mumbai in October.

Vaccine hesitancy in the Philippines

The Philippines began its Covid-19 vaccination campaign on Monday with the government struggling to reassure a population wary of foreign-made vaccines. Some 600,000 doses of the Chinese-made Sinovac vaccine arrived on Sunday.

President Rodrigo Duterte urged the public to get vaccinated, telling Filipinos to “please set your fears aside.” Regulators who issued emergency-use authorization for the vaccine recommended that it not be administered to health workers or people age 60 and older, citing uncertainty over its efficacy rate among those groups.

Recent surveys have shown that almost half of Filipinos are unwilling to receive any coronavirus vaccine because of safety concerns. The reluctance may also stem from a vaccine scare during a dengue immunization program in 2017, as well as distrust of China-made vaccines.

Context: The Philippines has had one of the worst outbreaks in Southeast Asia. The government aims to vaccinate 70 percent of its 100 million residents this year. It will receive the Pfizer doses later this year, and the AstraZeneca shots soon.

Prime Minister Narendra Modi was vaccinated against the coronavirus on Monday as India began the next phase of its inoculation drive to include anyone age 60 or older.

Days after the House of Representatives passed President Biden’s $1.9 trillion pandemic aid bill, the sweeping measure moved to the Senate for a possible vote this week.

The European Union will propose issuing a certificate called a Digital Green Pass that would allow let those who have been vaccinated to travel more freely, said Ursula von der Leyen, the president of the European Commission.

If you have 5 minutes, this is worth it

The ugly divorce between Britain and Brussels

As trade disputes pile up, Britain and the European Union have fallen out politically and diplomatically with a speed and a bitterness that surprised even pessimists about the relationship.

Our correspondent looked at how tensions have flared in every arena since a new trade agreement formalized Brexit on Jan. 1. Vaccines, shellfish and basic groceries have been caught in the fray. Above, a freight truck at a port in Northern Ireland.

Nicolas Sarkozy: The former French president was found guilty and sentenced to jail on Monday on charges of corruption and influence peddling. He received a sentence of at least one year but announced he would appeal. It is only the second time in modern French history that a former president has been convicted of a crime.

Hong Kong protests: Hundreds of people assembled outside a court where 47 prominent pro-democracy politicians and activists were being arraigned on Monday. Such demonstrations have become rare in Hong Kong after the city enacted coronavirus restrictions and Beijing imposed a harsh national security law.

Aleksei Navalny: The Russian opposition politician will serve his prison sentence in a notoriously harsh penal colony in the Vladimir region, east of Moscow, Russian news outlets reported. One former prisoner said “your personality deforms” from the abusive treatment.

Snapshot: Above, Tina Fey and Amy Poehler on a split-screen as they hosted the 2021 Golden Globes from a distance, on opposite U.S. coasts. The awards show, tailored for the pandemic, was threatened by some tech glitches. Chloé Zhao became the first Asian woman to win the award for best director, for “Nomadland.”

What we’re reading: This Vox article about how the pandemic has changed the way we connect on social media. Some people are posting more, using it as an outlet when there are few, and some are posting less, feeling like posting happy moments would be insensitive.

Cook: This simple recipe for a spicy beef stir-fry was adapted from Soei, a family-run restaurant in Bangkok.

Read: Long-awaited novels from Kazuo Ishiguro, Imbolo Mbue and Viet Thanh Nguyen are among the 16 new books to watch for in March.

Do: Spring fashion is taking classic suiting, casual knits and sportswear to create a fresh, unfussy approach to dressing. Have a look at the relaxed new look.

We have many, many more ideas in our At Home collection on what to read, cook, watch and do while staying safe at home.

China’s government commands an elaborate system that blocks foreign websites, contorts online conversations and punishes people for straying. Paul Mozur, who has written about technology and politics in China, spoke to our On Tech newsletter about “the Great Firewall” and how it compares to other countries’ efforts at internet control.

It’s a combination of blocking just about any foreign website you can think of and providing an information environment that reinforces what China’s government and the Chinese Communist Party say about the world.

The controls are comprehensive. A huge government bureaucracy monitors online activity, and an army of volunteers report content to be censored and help spread positive messages about government initiatives. Companies are tasked with pulling material off the internet and engineering teams are dispatched to build artificial intelligence tools to help. Contractors provide the manpower for industrial scale censorship.

Does the firewall work?

Yes. It comes at the cost of the government’s energy and money and the permanent anger of a segment of the population, but it’s extremely effective in shaping what many think.

Most people don’t have time to escape the information environment they live in, so it informs their outlook on the world — especially during crises.

The fear is that China will make the technology and techniques of its internet manipulation system readily adaptable by other autocratic countries. Myanmar is important to watch because if the generals control the internet without decimating the economy, it may become a model for other authoritarian regimes.

P.S.
• We’re listening to “The Daily.” Our latest episode is about the aftermath of destructive Texas storms.
• Here’s our Mini Crossword, and a clue: Storm-tracking device (five letters). You can find all our puzzles here.
• Lisa Chow is the new editor of “The Daily.”

Opinion | Only Impeachment Can Save Republicans

If there’s one thing Republicans in Congress ought to consider as they weigh the merits of impeaching Donald Trump, it’s the story of the president’s relationship with Mike Pence. In December 2015, then-Governor Pence tweeted, “Calls to ban Muslims from entering the U.S. are offensive and unconstitutional.” In April 2016, Tim Alberta reported that Pence […]

Determined Thai protesters showed up despite transit blocks. By Carole Landry Good morning. We’re covering the growing defiance of protesters in Thailand, Jacinda Ardern’s landslide victory in New Zealand and a special section from The Times editorial board on Donald Trump. Thai ban fails to end protests In the latest of months of demonstrations, tens […]

ECB policy is not on ‘autopilot’, Lagarde on Bloomberg TV