Nicola Sturgeon has been accused of damaging Scotland’s institution to “save her own skin”.

In fierce exchanges during First Minister’s Questions, the leader of the Scottish Conservatives, Ruth Davidson, said the Scottish government was tainted, the standing of parliament diminished, and that a culture of secrets and cover-ups had grown on Ms Sturgeon‘s watch.

Ms Sturgeon called that a dangerous and deluded conspiracy.

Her predecessor, Alex Salmond, is due to appear before the Scottish parliament’s harassment committee on Friday, which will be live on Sky News. 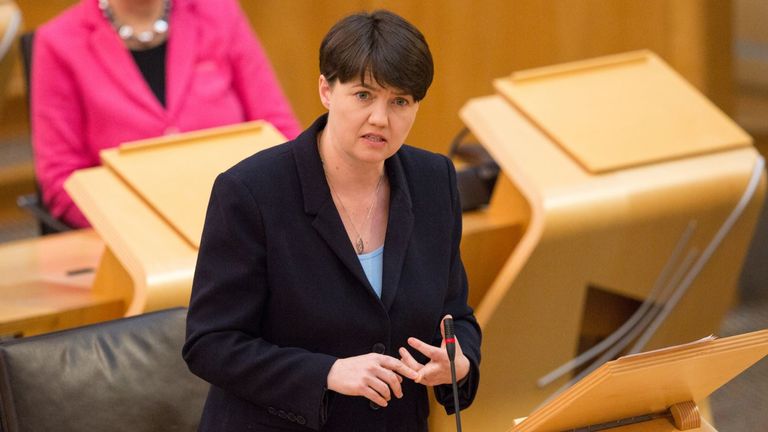 It is looking into the government’s mishandling of harassment complaints against him by two female civil servants.

His advance written submission has been partially redacted and Ms Davidson said the sections concealed from public view, and from access by the committee, were those most damaging to Ms Sturgeon.

She claimed the redacted sections indicated Ms Sturgeon misled parliament over when she found out about sexual misconduct complaints against Mr Salmond.

It included accounts of meetings held before she claimed to have learned of the complaints.

Ms Davidson said: “This sorry affair isn’t just tarnishing the first minister’s own reputation, it is damaging the institutions that it is her responsibility to uphold.

“The chief executive of Scotland’s ruling party caught calling for the police to be pressured. The reputation of the Scottish government tainted. The standing of this parliament diminished. A culture of secrets and cover-ups that is only growing and it is all taking place on Nicola Sturgeon’s watch.

“There’s just one further question I want to ask: First minister, is saving your own skin worth all the damage you’re doing?” 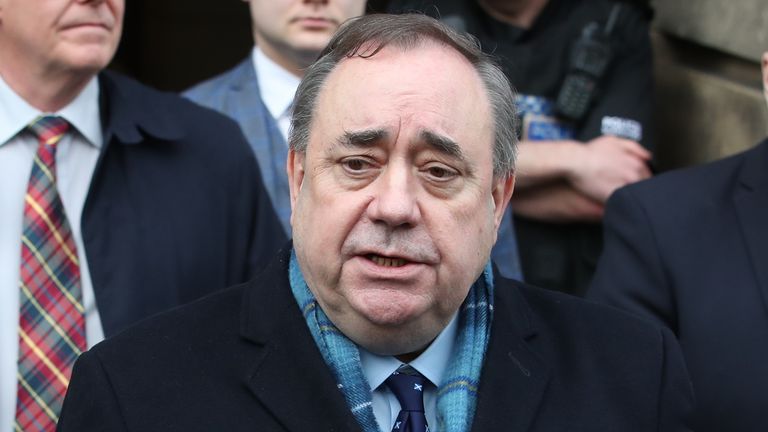 Ms Sturgeon denied any suggestion of a cover-up.

“The most important thing to me is the reputation of our country, the integrity of our institutions, and I will always act in a way that protects exactly that,” she said.

“Ruth Davidson has just gone through there a litany of nonsense. She accuses me of deflection. What deflection?

“She asked me in a previous question about meetings on the 2 April and 29 March 2018. She accused me of a cover-up and I say it’s a strange cover-up when I offered the information in published written evidence to the committee.

“It’s hardly a cover-up when I’ve been waiting for months with five previous and postponed dates to appear before a committee.”

MSPs used the legal privilege afforded by the parliamentary chamber to discuss evidence that has been redacted from public view.

Jackie Baillie MSP, interim leader of Scottish Labour who sits on the harassment committee, asked the first minister about redacted allegations that the name of a civil servant who had complained about Mr Salmond was revealed to his former chief of staff, and then conveyed to Mr Salmond.

She said: “This is an extraordinary breach of confidentiality.

“That action was certainly not about protecting the interests of the women involved. Did the first minister authorise the contact? If not, who did?” Willie Rennie MSP, leader of the Scottish Liberal Democrats, followed up with the question: “Is the first minster saying that the name of a complainer was not passed onto the former chief of staff of Alex Salmond?”

Ms Sturgeon, addressing the question for the first time publicly, replied: “To the very best of my knowledge, I do not think that happened.”

She was asked by Mr Rennie if she investigated, following the allegation, because an “absence of action from the first minister would be negligence in that respect”.

Ms Sturgeon replied: “It is not my belief that that happened. But there is a committee process underway right now.

“There is also a process separate to the committee where the independent adviser on the ministerial code is looking at all of these matters and what I am doing is allowing these processes to take their course.”

Singapore GE2020: Masagos responds to criticism of Ivan Lim, says election candidates will have to prove themselves

SINGAPORE – People’s Action Party vice-chairman Masagos Zulkifli on Friday (June 26) addressed online criticism of the party’s new face Ivan Lim Shaw Chuan, saying it is important for candidates who face allegations to prove themselves. He added that candidates should not be defined by a single moment in time or in their career, but […]

‘Are you crazy?!’ Marr savages Boris on Tory REVOLT forcing PM to erupt in furious clash

We will use your email address only for sending you newsletters. Please see our Privacy Notice for details of your data protection rights. Boris Johnson insisted that as a “freedom-loving” Conservative he has been unhappy about the restrictions he has had to impose to containe the coronavirus. The Prime Minister has come under fire from […]