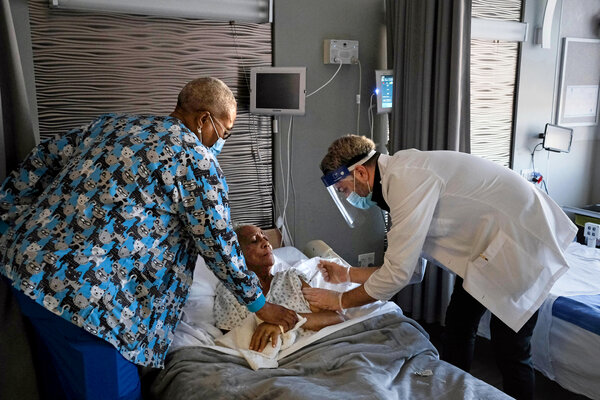 There are two new pieces of encouraging news about the pandemic — and two worrisome developments. Let’s take them one at a time, starting with the positive.

1. Nursing homes deaths are way down.

They have plummeted, falling by more than 60 percent between late December and early February. The main cause is straightforward: Nursing home residents have been among the first people to be vaccinated.

This chart — from my colleagues Matthew Conlen, Sarah Mervosh and Danielle Ivory — tells the story:

It’s another sign of how powerful the vaccines are. The decline in deaths happened surprisingly fast, said Dr. Sunil Parikh, a Yale University epidemiologist. It occurred even though most nursing home residents and employees have not yet received both of their vaccine shots — and it has likely continued over the past two weeks, which are not shown in this chart.

“I’m almost at a loss for words at how amazing it is and how exciting,” said Dr. David Gifford, the chief medical officer for the American Health Care Association, which represents long-term-care facilities.

The nursing home data add to the evidence that the vaccines don’t just work in research trials — they work in the real world, too. (A new study of Israel, published yesterday in The New England Journal of Medicine, offered the same message.)

The Food and Drug Administration released a report about a vaccine that it has not yet approved — from Johnson & Johnson — and the data were extremely positive.

Like the two vaccines that are already being administered in the U.S. — from Moderna and Pfizer — Johnson & Johnson’s eliminated both death and hospitalization in its research trial: About 20,000 people received the vaccine in the trial, and not a single one was hospitalized with Covid-19 symptoms a month later.

“I’ll never stop being amazed at zero hospitalizations among vaccinated in study after study,” Dr. Aaron Richterman of the University of Pennsylvania wrote. “It’s astonishing.” Dr. Isaac Bogoch, an infectious disease expert, called the results “terrific.” Dr. Kavita Patel wrote: “I would definitely recommend it for myself and my patients.”

The Johnson & Johnson vaccine also substantially reduced the number of moderate and asymptomatic Covid cases. It didn’t eliminate them, but the vaccines don’t need to eliminate all Covid cases in order to end the crisis. A sharp reduction — and sharper reduction in severe cases — can eventually turn this terrible coronavirus into yet another manageable virus.

(The nursing home data help make this point, as well: The number of confirmed cases has fallen by more than 80 percent, which is even bigger than the decline in deaths.)

A key advantage of the Johnson & Johnson vaccine is that it requires only one shot, making it easier to administer than the Moderna and Pfizer vaccines, which require two. An F.D.A. committee will meet on Friday, and the agency could approve the vaccine shortly afterward.

3. But caseloads are no longer falling.

The number of new cases has stopped declining in the U.S.:

The same is happening worldwide:

I don’t want to overreact to one week of data. But you can see a change in those lines. The most likely explanation is the more contagious variants of the virus, like the B.1.1.7 variant, which was first detected in Britain.

Tellingly, cases first stopped falling in much of Europe, where that variant is more widespread. On Friday, a top health official in Germany warned that country could be heading toward another “turning point,” after weeks of falling infections.

It’s a reminder that the pandemic is far from over. The variants have the potential to cause new outbreaks, especially if unvaccinated people become lax about mask wearing and social distancing.

4. And vaccinations have stalled.

This is not a good trend:

The storms of the past week are the major cause of the vaccination slowdown, having temporarily closed sites and delayed vaccine shipments. Whatever the reason, though, it will have consequences: Fewer vaccinations mean more deaths.

The biggest task facing the Biden administration over the next two months is accelerating the pace from the current 1.4 million vaccines per day to about three million per day.

The federal government is backing the test of an online portal to help the public find vaccines.

Moderna said it would test vaccines modified to protect against a variant first discovered in South Africa.

Ghana and other West African countries will begin vaccinating people as part of Covax, a global vaccine-sharing initiative. But as rich countries buy most of the supply, inequalities remain.

Corruption scandals are exposing how powerful and well-connected people in South America jumped the vaccine line.

President Biden nominated three people to the board of the United States Postal Service. If confirmed, they would give Democrats the power to oust Louis DeJoy, the postmaster general appointed by President Donald Trump.

Repairing the damage from the Capitol riot — including toppled 19th-century lanterns and damaged busts — could cost more than $30 million.

Doctors inserted a rod into Tiger Woods’s shin and screws into his foot and ankle after his car crash. They say he faces a long and uncertain recovery.

A former aide to Gov. Andrew Cuomo of New York said he had kissed her without her consent in his Manhattan office and invited her to play strip poker on an airplane. Cuomo denied the accusations.

When a Smith College student claimed that a janitor and a police officer had ejected her from a dorm lounge because she was Black, the case received national attention. But an investigation did not support her allegations, and Smith is now dealing with the fallout.

U.S. passports and other federal identification may soon include a third option for gender: X, for transgender and nonbinary people.

A Morning read: No flat map of our round world can be perfect, but a new one aims to be better.

From Opinion: Caring for Covid patients, through the eyes of two I.C.U. nurses.

Lives Lived: Advertising in the 1960s and construction in the 1980s were industries dominated by men. But through persistence and creativity, Judy Wald became a power broker in the former and Lenore Janis attained high posts in the latter. Wald died at 96, and Janis at 86.

In 2005, the New Oxford American Dictionary named “podcast” — a portmanteau of broadcast and iPod — its word of the year. Some saw it as a strange choice, as The Chicago Tribune reported: “Few of us have come across it and it certainly hasn’t gained the public visibility that makes it a defining word of 2005.”

The industry has come a long way. You can now choose from about two million podcasts. Celebrities and former presidents have flocked to the medium. Major companies like Amazon and Spotify have invested large sums of money in podcasting. And Hollywood is scooping up the rights to shows, turning them into TV series.

To make sense of it all, The Times is publishing a series this morning about podcasting. It includes: Ben Sisario on the state of the industry; Margaret Lyons on podcasting’s advantages over television; Jemele Hill and other podcasters offering recommendations and interviews with children who are already hosting their own shows.

Sheet pans are a staple of home cooking — partly thanks to Martha Stewart. Here are 20 recipes, including this refreshing ginger-dill salmon.

“Klara and the Sun,” the eighth novel by the Nobel laureate Kazuo Ishiguro, portrays a future in which artificial intelligence has encroached on every sphere of human life. Read the review.

Hear Dawn Richard’s new song, “Bussifame,” and seven other tracks on The Times’s pop playlist of the week.

The hosts joked about Mike Pence.

The pangram from yesterday’s Spelling Bee was anarchical. Here is today’s puzzle — or you can play online.

If you’re in the mood to play more, find all our games here.

Thanks for spending part of your morning with The Times. See you tomorrow. — David

P.S. The New York Times released a report calling for changes to make its workplace more diverse and inclusive.

Lalena Fisher, Claire Moses, Ian Prasad Philbrick, Tom Wright-Piersanti and Sanam Yar contributed to The Morning. You can reach the team at themorning@nytimes.com.

FILE PHOTO: The logo of Tate & Lyle compagny is seen on their European Innovation Centre in Villeneuve d’Ascq, France, September 26, 2018. REUTERS/Pascal Rossignol(Reuters) – British food ingredients maker Tate & Lyle confirmed on Sunday it was exploring a sale of a controlling stake in its primary products business and also separate its food […]

Opinion | The High School Sophomore Who Nailed the Electoral Vote

In late October we asked readers to make their election predictions and published a sampling of the more than 500 responses. Many readers predicted a Joe Biden landslide, others thought that President Trump would win the Electoral College and some rightly guessed that the results would be too close to call on Election Day. We […]

An anxious quiet settled on New York City like a blanket of fog. Voters lined up with solemn faces outside polling sites on Tuesday, stoic against a cold wind. Trump Tower stood lifeless and sterile, protected by a row of large Police Department dump trucks and police officers in riot gear. Pedestrians, their facial expressions […]