When the Pennsylvania Supreme Court unanimously rejected a Republican attempt to overturn the state’s election results in November, Justice David N. Wecht issued his own pointed rebuke, condemning the G.O.P. effort as “futile” and “a dangerous game.”

“It is not our role to lend legitimacy to such transparent and untimely efforts to subvert the will of Pennsylvania voters,” wrote Justice Wecht, a Democrat who was elected to a 10-year term on the bench in 2016. “Courts should not decide elections when the will of the voters is clear.”

Now Pennsylvania Republicans have a plan to make it less likely that judges like Justice Wecht get in their way.

G.O.P. legislators, dozens of whom supported overturning the state’s election results to aid former President Donald J. Trump, are moving to change the entire way that judges are selected in Pennsylvania, in a gambit that could tip the scales of the judiciary to favor their party, or at least elect judges more inclined to embrace Republican election challenges.

The proposal would replace the current system of statewide elections for judges with judicial districts drawn by the Republican-controlled legislature. Those districts could empower rural, predominantly conservative areas and particularly rewire the State Supreme Court, which has a 5-to-2 Democratic lean.

Democrats are now mobilizing to fight the effort, calling it a thinly veiled attempt at creating a new level of gerrymandering — an escalation of the decades-old practice of drawing congressional and state legislative districts to ensure that political power remains in one party’s hands. Democrats are marshaling grass-roots opposition, holding regular town hall events conducted over Zoom, and planning social media campaigns and call-in days to legislators, as well as an enormous voter education campaign. One group, Why Courts Matter Pennsylvania, has cut a two-minute infomercial.

Republicans in Pennsylvania have historically used gerrymandering to maintain their majority in the legislature, despite Democratic victories in statewide elections. Republicans have controlled the State House of Representatives since 2011 and the State Senate since 1993.

Current schedules for the legislature make it unlikely the Republicans could marshal their majorities in the House and Senate to pass the bill by Wednesday and put the proposal before voters on the ballot in May. Passing the bill after that date would set up a new and lengthy political war for November in this fiercely contested state.

Republicans have some history on their side: Pennsylvania voters tend to approve ballot measures.

“You should be very suspicious when you see a legislature who has been thwarted by a Supreme Court in its unconstitutional attempts to rig the democratic process then trying to rig the composition of that Supreme Court,” said Wendy Weiser, the director of the Democracy Program at the Brennan Center for Justice.

She added, “It is way too much control for one branch to have over another branch, particularly where one of its charges is to reign in the excesses of the legislative branch.”

If the Republican bill becomes law, Pennsylvania would become just the fifth state in the country, after Louisiana, Kentucky, Mississippi and Illinois, to wholly map its judicial system into electoral districts, according to the Brennan Center. And other states may soon join Pennsylvania in trying to remake the courts through redistricting.

Republicans in the Texas Legislature, which is also controlled by the G.O.P., recently introduced a bill that would shift districts for the state appellate courts by moving some counties into different districts, causing an uproar among state Democrats who saw the new districts as weakening the voting power of Black and Latino communities in judicial elections and potentially adding to the Republican tilt of the Texas courts.

Gilberto Hinojosa, the chair of the Texas Democratic Party, called the bill a “pure power grab meant to keep Blacks and Latinos from having influence on courts as their numbers in the state grow.”

These judicial redistricting battles are taking shape as Republican-controlled legislatures across the country explore new restrictions on voting after the 2020 elections. In Georgia, Republicans in the state legislature are seeking a host of new laws that would make voting more difficult, including banning drop boxes and placing sweeping limitations on mail-in voting. Similar bills in Arizona would restrict mail-in voting, including barring the state from sending out mail ballot applications. And in Texas, Republican lawmakers want to limit early voting periods.

The nationwide effort by Republicans follows a successful four-year drive by the party’s lawmakers in Washington to reshape the federal judiciary with conservative judges. Led by Senator Mitch McConnell, until recently the majority leader, and Mr. Trump, the Senate confirmed 231 federal judges, as well as three new Supreme Court justices, over the former president’s four-year term, according to data maintained by Russell Wheeler, a research fellow at the Brookings Institution.

In a state like Pennsylvania, which has two densely populated Democratic cities and large rural areas, this could give outsize representation to sparsely populated places that lean more conservative, particularly if the legislature resorts to a gerrymandering tactic similar to one used in Pennsylvania in 2011.

“Republicans have been good at gerrymandering districts in Pennsylvania, or good in the sense that they’ve been successful,” said State Senator Sharif Street, a Democrat. “I think they would like to remain successful, and they are confident that they can gerrymander judicial districts.”

Republicans in the state legislature argue that their proposed move would give different regions of Pennsylvania more representation.

Russ Diamond, the Republican state representative who is sponsoring the bill, said in an email that regional representation was necessary for the judiciary “because the same statewide consensus which goes in making law should come to bear when those statutes are heard on appeal, are applied in practical real-life situations, and when precedent is set for the future of the Commonwealth.” 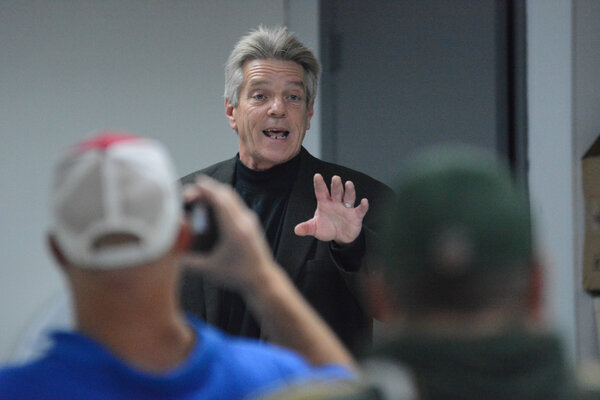 “The overall goal is to include the full diversity of Pennsylvania’s appellate courts,” Mr. Diamond added. “There is no way to completely depoliticize the courts, other than choosing judges via random selection or a lottery system. Every individual holds some political opinion or another.”

Geographic diversity, however, rarely equates to racial diversity in the courts. The four states that use judicial districts in state Supreme Court elections — Illinois, Louisiana, Mississippi and Kentucky — have never had more than one justice of color on the court at any given time, according to data from the Brennan Center.

While eight states use some form of judicial districts to elect judges, Pennsylvania’s proposal remains an outlier on a few key elements. First, a partisan legislature would have the power to redraw the districts every 10 years, whereas those elsewhere remain for longer or are based on statute. Additionally, the judicial districts in Pennsylvania would not be bound by or based on any existing legislative or congressional districts, created from scratch by the Republican-controlled legislature.

The move has caught the attention of national Democratic groups that are at the forefront of redistricting battles across the country.

“A decade ago, Pennsylvania Republicans gerrymandered themselves into majorities in the legislature and congressional delegation,” said Eric H. Holder Jr., the former United States attorney general and current chairman of the National Democratic Redistricting Committee. “Now that their grip on power has been forcibly loosened by the courts, they want to create and then manipulate judicial districts in a blatant attempt to undermine the independence of the judiciary and stack the courts with their conservative allies.”

Because the bill has already passed the House once, in 2020, it needs only to pass both chambers of the state legislature again to make it on the ballot.

Further stoking Democrats’ fears: The bill does not need the signature of Gov. Tom Wolf, a Democrat. Since it would be an amendment to the Constitution, it would head to the ballot as a referendum question to be voted on in the next election (if the bill passes before Wednesday, it would go to voters during the May primary). Historically, Pennsylvania voters have voted more in favor of ballot measures than against them, according to data from the National Conference of State Legislatures.

Good government groups have teamed up with Democrats to mount a huge voter education campaign, anticipating that the judicial question may soon be on the ballot. Progressive groups including the Judicial Independent Project of PA, a new coalition that includes the voting rights group Common Cause, have been holding digital town halls about the judicial redistricting proposal, with attendance regularly topping 100 people.

On a Thursday evening late last month, more than 160 people logged into Zoom to hear from coalition leaders about the bill and to hatch plans to further mobilize against it. Rebecca Litt, a senior organizer from a local Indivisible group, proposed a call-your-legislator day. Ricardo Almodovar, an organizing director with We the People PA, another progressive group, noted the graphics and other social media campaigns already underway to help educate voters.

“We are in the last legislative session of this,” said Alexa Grant, a program advocate with Common Cause. “So we are the last line of defense.”

Toronto Raptors head coach Nick Nurse says Scotiabank Arena will be utilized as a voting registration centre in advance of the upcoming United States election. Nurse, who is one of several NBA coaches and players involved in a campaign that is encouraging Americans to vote, made the announcement during a media availability Thursday afternoon. He […]

We will use your email address only for sending you newsletters. Please see our Privacy Notice for details of your data protection rights. The Prime Minister’s Brexit Bill was rejected by the House of Lords earlier this month and will go back to the Commons next week for a second reading. Speaking to Express.co.uk, the […]

At Once Diminished and Dominating, Trump Prepares for His Next Act

WASHINGTON — Donald J. Trump, the former president of the United States, commutes to New York City from his New Jersey golf club to work out of his office in Trump Tower at least once a week, slipping in and out of Manhattan without attracting much attention. The place isn’t as he left it. Many […]