The UK has been hit by severe winter weather this week, with heavy snow falling across the country and temperatures falling to lows of -22.9C in the Scottish Highlands last night – which forecasters believe was the coldest night recorded since 1995. New weather charts show the freezing temperatures are set to continue into the weekend, as strong winds are expected to keep battering the UK and drive down the mercury.

The forecast for the next few days continues to include cold temperatures, icy winds and snow showers.

On Thursday, lows of -11C are forecast in Scotland, while temperatures will range from -1C to -8C across the rest of the UK.

The chilly temperatures will continue through Friday, with an average of -4C forecast across the whole of the UK at 12pm, according to Netweather charts.

Strong winds will make it feel even colder outside, with maps by WXCharts showing at 9am on Saturday parts of Scotland and northern England can expect it to feel -16C.

Parts of the Midlands and Wales are also forecast for the wind chill to drive temperatures down to -12C. 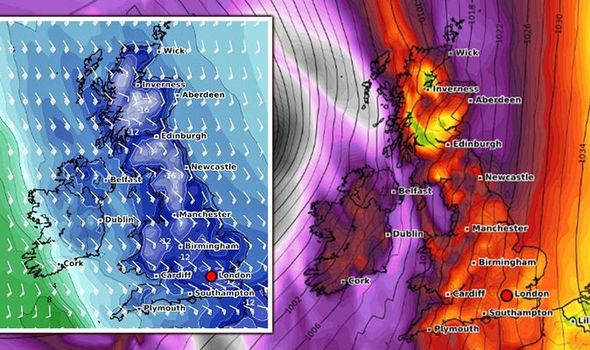 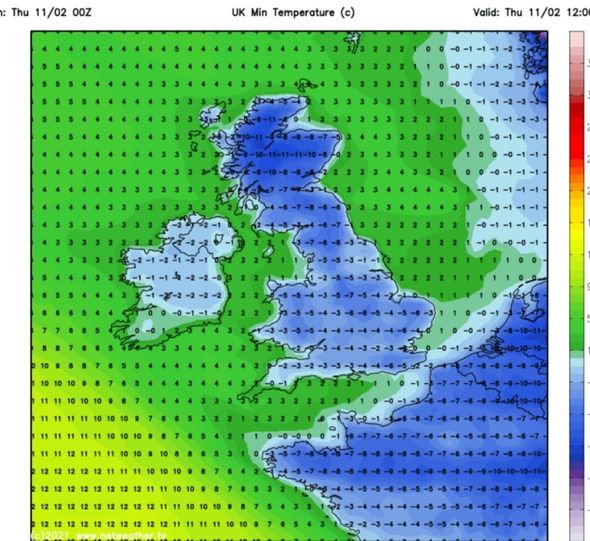 The UK turns from being largely green and yellow, indicating wind speeds of between 18-31mph (30-50kmh), on Friday evening to dark red and purple as wind speeds dramatically pick up speed.

At 3pm on Sunday February 14, the map forecasts max wind speeds of 96mph (154kmh), with the chart showing a terrifying mass hurtling towards the west of Britain.

But by Monday evening, wind speeds are expected to calm down, allowing the mercury to rise. 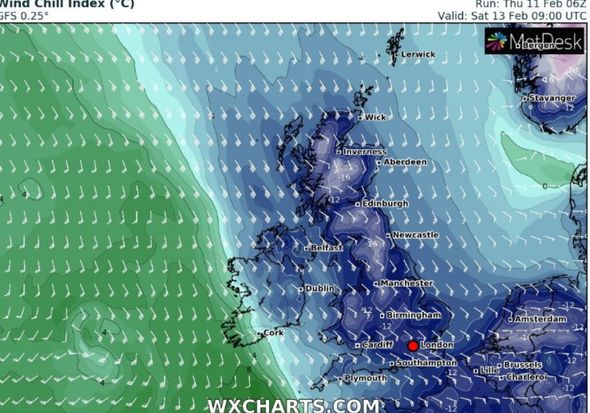 A chart valid for 3pm on Monday shows no minus temperatures, with parts of the West Country expecting highs of 11C.

Northern parts will remain colder, but the mercury is expected to stay above 1C.

Snow showers are expected in parts of Scotland and northern England on Friday, with no further snow forecast for the south east.

Northern Ireland and parts of the west have a high chance of snow on Saturday evening, according to Netweather’s snow risk charts.

Further snow is forecast in Scotland and northern England on Sunday and Monday. 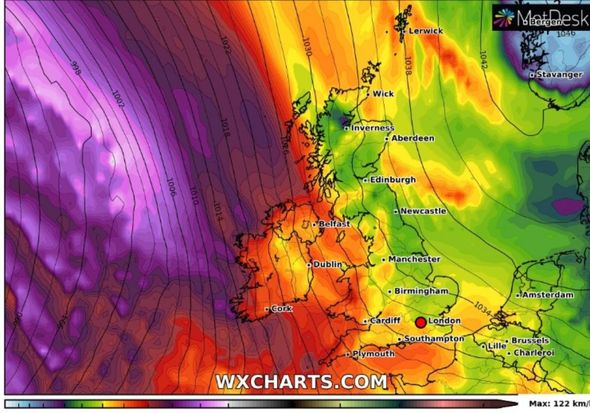 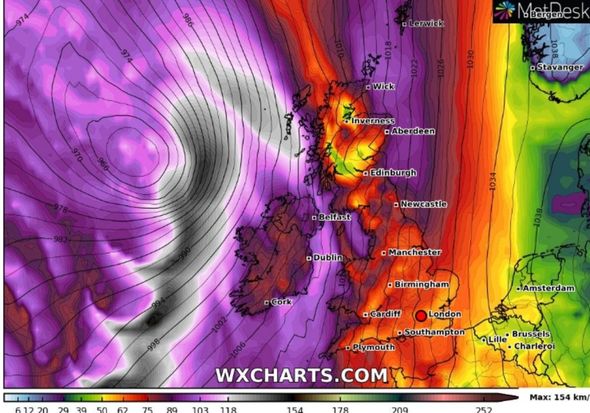 Met Office Chief Meteorologist, Dan Suri, said: “Weather for the rest of this week will continue to be very cold with daytime temperatures only reaching a degree or so above freezing at best for many and strong easterly winds continuing to make it feel even colder.

“Overnight temperatures have been notable with -17.1C recorded in the Highlands of Scotland, on Tuesday night.”

“Further rain and snow spreads east Sunday, with milder weather slowly following for the start of next week.” 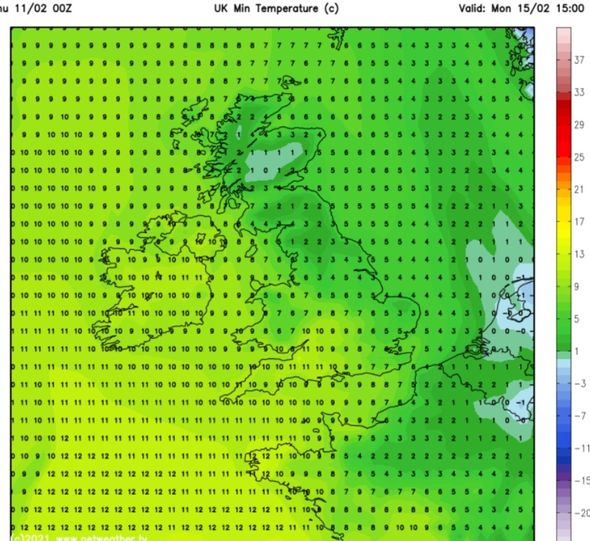 BBC forecasters said: “Saturday will be cold, windy and cloudy with outbreaks of snow developing over some western and north-western areas.

“Turning less cold on Sunday with snow giving way to rain in the west and north-west, but staying drier in the south-east.

“Monday will be windy for all with further showery outbreaks of rain, heavy at times, along with cloudy skies. Turning a little milder.”

Ukraine says the Kyiv negotiation with Iran was ‘constructive’ as the two sides agree on the terms of next round. Ukraine has said its first round of talks with Iran held in Kyiv about the downing of a Ukrainian airliner in January had been “constructive”, but he said it was too early to say how […]

By Greg Roumeliotis and Pamela Barbaglia NEW YORK/LONDON (Reuters) – A rise in large mergers and acquisitions (M&A) helped offset a plunge in cross-border deals in 2019, and many dealmakers say they expect subsiding geopolitical risk to embolden companies to pursue more tie-ups across regions in 2020. The value of M&A globally totaled about $3.9 […]

HELSINKI (Reuters) – Finland’s government will introduce a 150 million euro ($162 million) investment programme to help mid-cap companies to survive the economic blow caused by the coronavirus outbreak, it said on Friday. The new funding comes on top of previously announced bailout measures amounting to a billion euros, in addition to securing 10 billion […]

Trump was sicker than acknowledged with COVID-19

This is another News Portal > World News > German growth to remain weak in first quarter as coronavirus hits: Bundesbank