The BBC Weather meteorologist said the temperature drop will come with further snow showers moving across the UK through most of Tuesday from the east. The Met Office issued an amber snow warning in place until 9PM in the Stirling and Perth area, where the heaviest of the snowfalls is expected to be. Carol Kirkwood said: “We do have an area of concern and that’s where the Met Office has this amber weather warning,

“In parts of Scotland, under that amber, we are looking at another 5cm to 10cm on higher ground, it could be double that, perhaps even a little bit more.

“The likelihood of disruptions is high. You could experience, for example, some travel disruption to watch out for.”

She continued: “Through the course of the night, there has been a good rush of snow showers around, some of them getting over towards Northern Ireland as well.

“As we go through the rest of today, that process will continue, particularly where we do have that amber weather warning. It’s valid until 9pm. 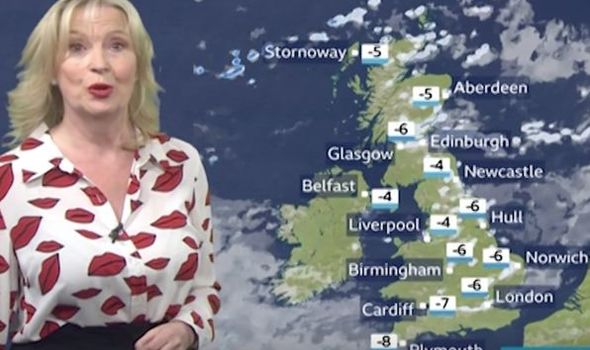 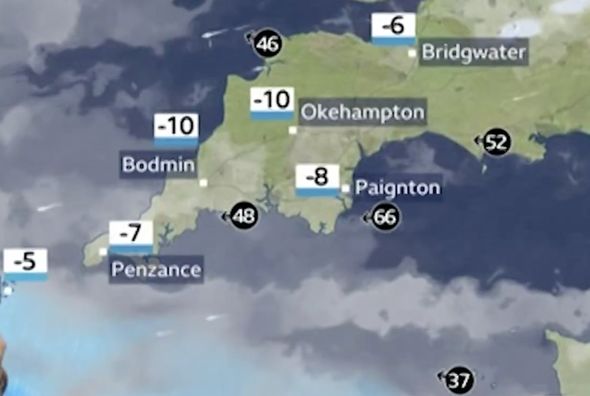 “But there are showers for most of the UK, some of us will see them, some of us won’t see anything at all. It’ll be a dry day with some sunshine.

“But again, it’s going to be a windy day. Quite some gusts as well, particularly through the English Channel and around the southwest.”

The BBC Weather forecaster added: “The wind is coming from a cold direction, namely from the East, hence the Beast from the East.

“That is introducing all this cold air so these are the temperatures you may see on your thermometer but it’s going to feel colder than that when you add on the windchill. 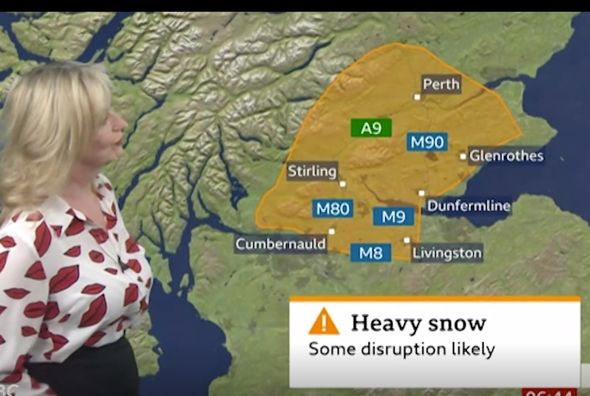 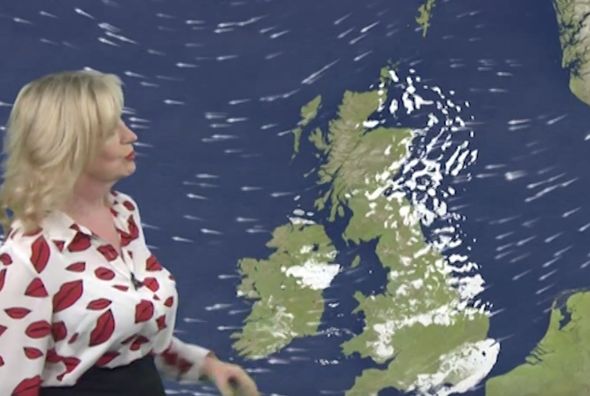 “And if we zoom down to the southwest where the wind is strongest, it’s going to feel more like -10C in some parts.”

While snowfalls for most of Britain are expected to ease on Tuesday, snow showers in many northern and eastern parts of Britain are forecast, reaching depths of 15cm (6 inches) in places.

A yellow warning for snow and ice also remains current for the southern half of Northern Ireland. 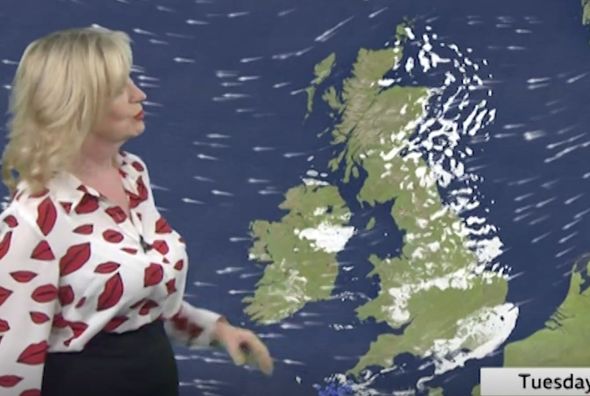 Storm Darcy has brought havoc to many parts of the country, with police in parts of Suffolk, Norfolk and Essex on Monday advising against driving as roads became “impassable” due to settled snow.

In Norfolk, one driver had to be dug out of his car after it became trapped in a snowdrift.

Several Covid-19 vaccination centres were forced to close, including Clacton Hospital, Colchester United’s stadium, Gainsborough Sports Centre in Ipswich and Chevington Close in Bury St Edmunds, and a number of schools were closed across the south-east of England and Lincolnshire.

It has been 24 years since the funeral of the much loved Princess Diana was watched by billions of mourners worldwide and around two million lining the streets. The 'People's Princess' was laid to rest on September 6 in 1997, following a public funeral that included a sombre procession from Kensington Palace to Westminster Abbey. […]

(Reuters) – Goldman Sachs cut its second- and third-quarter Brent price forecasts to $30 per barrel, citing the oil price war between Russia and Saudi Arabia and a signiﬁcant collapse in oil demand due to the coronavirus that has killed more than 3,500 globally. Oil fell by the most since 1991 on Monday after Saudi […]