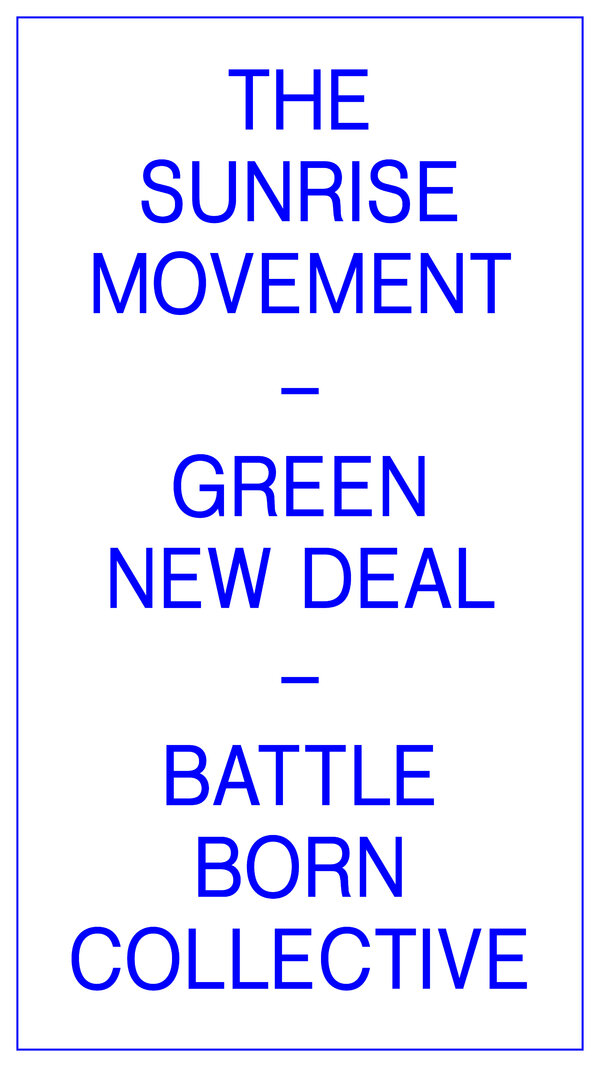 The Sunrise Movement, a group of young climate activists who has roiled Democratic politics, is best known for policies that had little chance of becoming, well, national policy.

The Green New Deal, an expansive suite of climate and economic policies championed by the group, was crafted during the Trump administration — a kind of climate change platform for a political world that did not exist.

With Democrats now controlling government, the group finally has a chance to turn that alternative reality into an actual one. But the window of time may be brief: Historically, the president’s party loses power after the midterm elections.

The group highlights a dynamic of the new Biden era: Many of the most influential voices in Democratic politics are also the least experienced.

“We launched in 2017 and we’ve been very successfully flying by the seat of our pants since then,” said Evan Weber, political director of the Sunrise Movement, who is working with the collective. “There’s definitely a learning curve and it’s very useful to have people who are experienced and battle tested.”

The liberal energy fueled during the Trump administration led to the creation of a number of political organizations, as progressives tapped into a Democratic base that was shifting to the left. Much of their work focused on replacing moderate Democrats with younger, more diverse politicians like Representative Alexandria Ocasio-Cortez and other House progressives.

Now, these groups face the challenge of lobbying other Democrats to accept their liberal platform. Adam Jentleson and Rebecca Kirszner Katz, former aides to Harry Reid and co-founders of the collective, believe they can help.

The two liberal strategists, funded by Democratic donors, plan to offer their services free to progressive organizations and have already hired two staff members — Hannah Simon and Tré Easton — to help with their work. The name of their group references the slogan of Nevada — a homage to the home state of Mr. Reid, a mentor and the last Senate majority leader to preside over a Democratic-controlled Capitol. Mr. Jentleson described their new operation as a “political intelligence” firm for progressives, offering insights about legislative maneuvering and ways to shape the policy debate.

“We’re in this moment where we have power for the first time in a long time, and the question is how to use it,” he said. “One of the things we bring to the table is having served in leadership roles when Democrats had power and were able to advance their agenda.”

The shadow of that period looms large over the party, with many Democrats arguing that former President Barack Obama and Mr. Reid spent too much time chasing Republican support for their early legislative initiatives. Mr. Reid has privately urged President Biden and Senator Chuck Schumer, the Democratic majority leader, to adopt a more aggressive approach to passing their agenda.

Mr. Jentleson and Ms. Kirszner Katz, he said, “are outsiders with the knowledge of the insiders.”

So far, progressives seem fairly satisfied with the early moves of the new administration, encouraged by Mr. Biden’s cabinet picks, a spate of early executive orders and signals that Democratic leaders plan to push through a $1.9 trillion Covid-19 relief package.

But the post-pandemic future will likely presage intraparty battles. Throughout the presidential campaign, Mr. Biden staked out a more moderate path than many of his primary rivals, rejecting calls from liberals for proposals like ending the filibuster and expanding the Supreme Court. He has not entirely embraced the Green New Deal and supports more limited plans to tackle health care and college debt.

Pushing their own party will involve a new set of political skills for many progressive activists. Younger organizations, like Justice Democrats and Sunrise, built a following by rallying the public with staunch calls of opposition to Mr. Trump and his administration. Mr. Jentleson and Ms. Kirszner Katz are urging them not to use those same tactics within the party, encouraging phone calls before blasting a fellow Democrat on Twitter, and have released a series of messaging memos laying out their collective position.

“Democrats have not used the power they have as efficiently as they could,” said Ms. Kirszner Katz. “We have very little time before the midterms and we need to get as much as we can right away.”

Some of the activists agree that the changing times may call for some new strategies.

“We think it’s important that progressives are known not only for big ideas but delivering big results,” said Waleed Shahid, a spokesman for Justice Democrats. “That’s a little bit of a transition now.”

We want to hear from our readers. Have a question? We’ll try to answer it. Have a comment? We’re all ears. Email us at onpolitics@nytimes.com and follow me on Twitter at @llerer.

One year after Trump’s first impeachment, a second Senate trial.

Mr. Trump’s second impeachment trial is scheduled to start in the Senate on Tuesday. Expect a lot of noise that will probably end with little more than a whimper.

Here’s what we know so far about the trial:

Mr. Trump is not expected to appear. Lawyers for the former president rejected a request by House Democrats for him to testify under oath, calling the request a “public relations stunt” on Thursday. As some of my colleagues pointed out, Mr. Trump could put himself in legal jeopardy if he testified. He has a penchant for stating falsehoods, and it is a federal felony to do so before Congress.

We don’t know whether there will be any witnesses. House Democrats have been calling for testimony from a number of eyewitnesses. But Mr. Schumer has expressed some reluctance to holding a Senate vote to compel any witnesses or additional evidence. Some Senate Democrats fear testimony could extend the trial for weeks and distract from their other legislative priorities. Mr. Trump’s defense team has no plans to call any witnesses.

Mr. Biden is keeping his distance. The president has largely avoided commenting on the trial beyond saying that the Senate should proceed. “He was impeached by the House, and it has to move forward,” Mr. Biden said in an interview with People this week. “Otherwise, it would come off as farcical.”

The outcome could have a real impact on Mr. Trump’s political future. At least 17 Republican senators would need to join all 50 Democrats to convict Mr. Trump by a two-thirds majority. If that happens, the body could hold a second vote to disqualify him from seeking office again.

But, that’s not likely to happen. In the Senate last week, 45 Republicans voted for a proposal that would dismiss the trial as unconstitutional because Mr. Trump is no longer in office. (The president was impeached by the House before he left office, and most legal scholars agree that a former president can be tried by the Senate even after leaving office.) Currently, no Republican senators openly support conviction. It would take some significant revelations to change their position.

… That’s the number of House Republicans who voted to remove Representative Marjorie Taylor Greene from her committee positions.

And this little NYC Mayoral candidate was … “doored by a taxi.”

Greta Thunberg has taken aim at New Zealand for what she saw as the Government’s lack of action on climate change. In early December, Parliament officially declared a climate emergency in New Zealand – a move Prime Minister Jacinda Ardern called an “acknowledgment of the next generation”. It was a “declaration based on science”, Ardern […]

Is Keir Starmer the right answer… to the wrong question?

Labour leader Sir Keir Starmer has four years until the next general election, in which time he has to try to reunite the party and take back voters lost to the Conservatives, as he aims to become prime minister. So, who is he – and can he quicken the pulse of voters? Deputy political editor […]

WASHINGTON — When Speaker Nancy Pelosi was looking for someone to preside over the historic debate over impeaching President Trump at the end of 2019, she chose a veteran Democrat who had impressed her with a tough, skillful parliamentary hand: Representative Diana DeGette of Colorado. “Sitting here in the speaker’s chair, all I can think […]

This is another News Portal > Politics > EU to strike back at UK after Lord Frost Brexit speech: ‘Big confrontation ahead’