It’s been one month since a mob stormed the Capitol, which led to soul-searching about the influence of money in politics (among other things). The DealBook newsletter delves into a single topic or theme every weekend, and today we look at how corporate cash became such a feature of the system, what’s changed since the riot and what it means for the future.

One month ago, the riot at the U.S. Capitol delayed but did not derail the process of certifying the presidential election. The shocking scenes did, however, prompt a reckoning about money in politics that persists, and could significantly alter the way companies and candidates interact.

Or not. It will take more than a month to see whether Jan. 6, 2021, signified a meaningful turning point or a momentary swerve from the status quo.

The most immediate change since the riot is that hundreds of big companies halted their donations to the lawmakers who objected to the vote certification, the motivating event for the mob in Washington. Many companies paused political giving altogether.

The thing is, these corporate political action committees account for a sliver of the cash that flows into politics. “If you are a corporate political spender, there are so many avenues,” said Ciara Torres-Spelliscy, a law professor at Stetson University and the author of books on campaign finance law. Because the money trail goes dark along many of these avenues, with groups disguising or not disclosing their donors, even something as seemingly momentous as the Capitol riot may not have a lasting impact.

Unless, that is, companies are rethinking donation policies beyond the limited measures discussed to date, pressure from stakeholders forces bigger changes, or lawmakers decide to dismantle the system that has proved so lucrative to their campaigns and causes over the years. — Ephrat Livni

1819: The Supreme Court wrote that a corporation was an “immortal being” that existed “only in contemplation of the law” but still required certain legal protections.

1971: The Federal Election Campaign Act (FECA), amended in 1974 after Watergate, mandated donor disclosures and created campaign contribution and spending limits. The reporting requirements remain intact. The spending limits do not.

1976: FECA’s limits were challenged as violating free speech. The Supreme Court decided that restricting contributions preserved the “integrity of our system of representative democracy,” but that the act’s spending limits were too severe. This laid the groundwork for interpretations that money is speech.

2010: In the Citizens United case, the Supreme Court gave corporations a First Amendment right to speak politically, using money. As a result, companies could raise and spend unlimited funds on “independent expenditures” as long as they didn’t coordinate with candidates or give directly to campaigns. In response, so-called super PACs and nonprofits sprang up to collect corporate cash for political purposes. In the 2020 election cycle, more than 2,000 super PACs spent $2.1 billion.

The Capitol riot has forced companies to explain the reasons for their political spending, and deal with the consequences of their candor. This is especially true for the companies that announced a pause in donations from their political action committees.

Corporate PACs don’t spend company money, but collect donations from employees and direct how they are spent, with a limit of $10,000 per candidate in an election year. That’s a drop in the bucket, relatively speaking, but because this activity must be conducted out in the open, it attracts public scrutiny.

Executives are comparing notes to decide what to do next about their corporate PACs. How to support candidates on issues of importance to the company without endorsing their other positions that may go against corporate values? Are direct donations really worth it?

Within days of the riot, Morgan Stanley singled out the 147 members of Congress, all Republicans, who challenged the election count for its pause in corporate PAC donations. It took this targeted approach after consulting its government relations, legal and compliance teams, as well as senior managers including the chief executive, James Gorman, a person familiar with the matter said. In recent weeks, the bank’s large wealth management arm has seen some pushback from clients threatening to take their business elsewhere, the person said.

Microsoft, which initially halted all donations and held a series of meetings with employees, announced Friday that it would suspend donations to those who voted against certifying the election, as well as state officials and organizations who “supported such objections.” The tech giant also said it would “promote and join a conversation with other businesses” about “strengthening democracy.”

The companies whose donations are all still on an indefinite pause, like BlackRock, Coca-Cola and Hilton, are unlikely to avoid having to take further action. Democrats have hinted that they won’t look favorably on companies that cut them off after the riot. At the same time, it’s a big step to shun top Republicans like Kevin McCarthy, the party’s leader in the House, who voted against the election certification.

Shareholders, sensing a new source of risk to their investments, are also planning resolutions for upcoming annual meetings calling for greater disclosure of political spending.

The simplest solution might be to forgo PAC donations entirely. So far, only Charles Schwab has closed its PAC since the riot.

“We’ve got to find a way to participate in the right way,” said Doug McMillon, Walmart’s chief, at a recent meeting of the Business Roundtable, which he chairs. (Walmart has suspended donations to the Republicans who voted against certification.) “I think there’s still a role for business to play,” he said.

All of these announcements represent “a huge acknowledgment that corporations have invested in politics because they think this money makes a difference,” said Jacob Hacker, a political science professor at Yale. “And they think they’re part of the problem.” — Lauren Hirsch 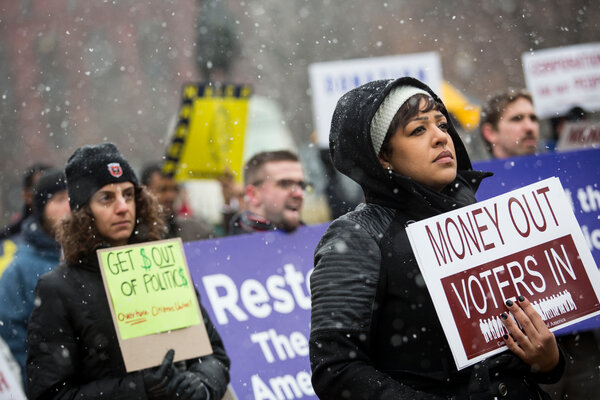 Citizens United removed some spending limits but didn’t dismiss the need for transparency. Disclosures would keep the public informed about corporate influence in politics, the Supreme Court assumed. But workarounds quickly emerged and money found a way to flow undetected.

Super PACs disclose their finances to regulators but can take contributions from nonprofits that don’t have the same reporting requirements or need to publicly disclose their donors. Some of these “social welfare” nonprofits are highly political and allied to both Republican and Democratic causes. Trade groups can also take corporate donations and pass them on to nonprofits or super PACs, obscuring the source of the funds.

Anna Massoglia, an investigative researcher at the Center for Responsive Politics, found that two dozen of the companies that re-evaluated donations after the Capitol riot, including AT&T, CVS and Intel, had given $100 million to these so-called dark money groups since 2015. Over all, dark money groups poured more than $750 million into the 2020 election cycle, with liberal groups accounting for more than conservative ones.

From Riot to Impeachment

The riot inside the U.S. Capitol on Wednesday, Jan. 6, followed a rally at which President Trump made an inflammatory speech to his supporters, questioning the results of the election. Here’s a look at what happened and the ongoing fallout:

Tokyo prosecutors on Monday charged two Americans with helping Carlos Ghosn, the former Nissan chief, jump bail in Tokyo, where he was awaiting trial on four counts of financial wrongdoing. Japanese prosecutors said in an indictment that the two men, Michael Taylor, 60, a former Green Beret, and his son Peter Maxwell Taylor, 27, assisted […]

Shares start month on a high after bullish PMIs

LONDON (Reuters) – Stocks started September on a positive note on Tuesday, with global indexes close to all-time highs as data in China and Europe showed manufacturing demand rebounding from coronavirus-induced lows. Factory activity in China expanded at the fastest rate in nearly a decade in August, a private PMI survey showed on Tuesday, boosting […]

Seven states are considering filing their own antitrust suit against Google.

Echoing his campaign pitch, Trump will focus on economic boom in annual speech

PMQS: Why are MPs wearing wheat on lapels at PMQs?