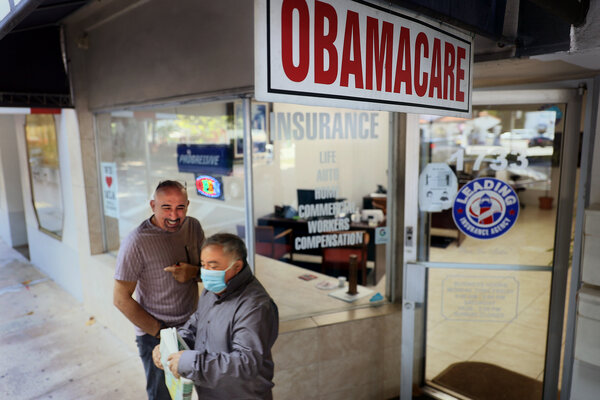 Obamacare endured a grueling first decade of existence. Its launch was famously clunky. It was unpopular in its early years. It narrowly escaped repeal at both the Supreme Court and in Congress.

But the law — passed in 2010 and more formally known as the Affordable Care Act — has survived. It’s more than survived, in fact. It now stands as a monument to a particular theory of progressive lawmaking: When the government enacts a new benefit that makes life easier for millions of people, the program tends to endure. That describes universal high school, Social Security, Medicare, Medicaid and now Obamacare.

President Biden yesterday signed a package of executive actions on health care, and many experts described them as steps to undo Donald Trump’s attempted sabotage of the law. Which they are. But the modest scope of the actions is also a reminder of how little progress Trump made in undermining the law.

The number of Americans without health insurance did rise during the Trump presidency, because of his attempts to diminish the law. His administration did little to advertise Obamacare policies and weakened some of its provisions, like protections for people with certain medical conditions. But this increase in the number of uninsured reversed only a small portion of the decline caused by Obamacare.

Even after Trump, an additional 20 million or so Americans have health insurance today largely because of Obamacare. Others have better benefits — like maternity care and addiction treatment — or face lower costs.

What Biden did yesterday

Biden will try to strengthen protections for people with medical conditions. He will also create a new three-month sign-up period for Obamacare, starting next month, aimed partly at people who lost their jobs during the pandemic. The most recent sign-up period was in the fall.

Perhaps most significant, the Biden administration plans to promote the sign-up period heavily, through advertisements, email and other outreach, according to my colleague Margot Sanger-Katz, who’s been covering Obamacare for most of its existence. “Biden’s people think the Trump people bungled the regular enrollment period,” Margot told me.

By the end of Trump’s presidency, the uninsured rate probably rose close to 10 percent, from 8.6 percent in the Obama administration’s final year. Through executive action, Biden may be able to reduce it to about 8 percent over the next four years, according to my reporting.

The bigger question is whether Biden can persuade Congress to pass a new law that would go further than Obamacare did, by making coverage less expensive for more people. Otherwise, at least 25 million Americans are likely to remain uninsured.

“There are still millions of poor, uninsured Americans in states that didn’t expand Medicaid,” Margot says, “and millions of middle-class Americans who find Obamacare insurance unaffordable.”

The big picture: “The Affordable Care Act is a highly flawed, distressingly compromised, woefully incomplete attempt to establish a basic right that already exists … in every other developed nation,” Jonathan Cohn, another longtime health care journalist, writes in “The Ten Year War,” a forthcoming book. “It is also the most ambitious and significant piece of domestic legislation to pass in half a century.”

Novavax, a little-known company supported by the federal government’s Operation Warp Speed, said that its coronavirus vaccine was almost 90 percent effective. But it’s only about 50 percent effective against the variant that was first found in South Africa.

Health officials have now detected that variant in the U.S., in at least two people in South Carolina.

Mexico’s death toll became the world’s third highest. Cases have surged in the country since December, and its hospitals are struggling.

Vietnam, which has been relatively successful in containing the virus, reported 82 new infections, the first local transmissions in nearly two months. Some cases may be connected to the variant that has been spreading in Britain.

Unionized nurses demonstrated across the country this week, seeking better protections from the virus. It’s a sign of the power that health care worker unions are seeking to build during the pandemic.

GameStop’s stock plummeted 44 percent yesterday, after days of rapid growth spurred by groups of small investors who gather online. The company’s stock is still 200 percent higher than it was at the start of the week.

Several trading platforms, including Robinhood, restricted users’ ability to trade GameStop and other volatile stocks for much of the day.

Ted Cruz and Alexandria Ocasio-Cortez — from opposite sides of the political spectrum — complained that Robinhood’s restrictions punished ordinary people, while large investors and hedge funds were able to trade freely.

Robinhood said that it was raising more than $1 billion from its existing investors as it strained to fulfill trades during the stock market frenzy. (For more details, check out DealBook.)

That a Reddit forum upended Wall Street should come as no surprise, the Times’s tech columnist Kevin Roose writes: “Book publishers, movie studios, restaurant chains — all of them have, in some way, been forced to cede power to their online critics.”

General Motors says it will sell only electric vehicles by 2035, phasing out the gas-powered pickup trucks and S.U.V.s that today earn billions for the company.

Biden is trying to persuade Republicans to back a $1.9 trillion spending package, but Democrats are pursuing another path to get the relief approved even without bipartisan support.

Representative Kevin McCarthy, the top House Republican, held a “cordial” meeting with Donald Trump to court support for Republican candidates. The meeting, weeks after McCarthy blamed Trump for the Jan. 6 Capitol riot, shows how reluctant Republicans are to desert the former president.

Some Republican members of Congress have links to organizations and movements that played a role in the assault on the Capitol, prompting scrutiny. And body camera footage shows how Capitol rioters trampled over a 34-year-old woman.

After 130 years, a snowy owl has made an appearance in Central Park.

From Opinion: How can adults reduce stress and increase kinship? Try therapeutic crying.

And with these Op-Docs, you can bring Sundance to your living room.

Lives Lived: In a seven-decade-long career, Cicely Tyson broke ground for Black actors by refusing to take demeaning parts. She won three Emmys, an honorary Oscar, and at 88 she became the oldest person to win a Tony. She died at 96.

When Christopher Little received the first three chapters of a book about a boy wizard in 1995, he initially dismissed it. But his office manager insisted he give it a chance. Little became the literary agent who helped build an empire around Harry Potter. Little died at 79.

How to fix the Oscars

The first Academy Awards ceremony, on May 16, 1929, was 15 minutes long and resembled a corporate banquet. Over the years, the ceremony turned into the hourslong spectacle that you’ve probably watched at some point. Now some critics and Hollywood people are urging new changes.

Some could even take effect this year. The ceremony has been postponed until late April because of the pandemic.

A.O. Scott, a film critic at The Times, made the case for completely revamping the ceremony. Among his suggestions: expanding the awards categories to create separate prizes for genres like comedy, horror and action, which are typically not considered prestige cinema and are shut out from awards.

He also recommends treating “Parasite,” last year’s best-picture winner, “not as an outlier but as a harbinger.” It was the first film not in the English language to win that award, and it “fulfilled the Oscar ideal” — a well-crafted movie with something to say that stands the test of time — better than any mainstream Hollywood production in decades, he writes. So why not remove the best international feature category and make best picture an explicitly international category? Another idea: broadening the awards voting pool by expanding academy membership for more geographical, generational and cultural diversity.

Others have more immediate suggestions. During the pandemic, the actors nominated for awards should stay home and participate remotely, Peter Mehlman, a former “Seinfeld” writer, told The Times. “Don’t you think accepting an Oscar on a couch with dogs and kids might just humanize these people?” he said.

Oscars buzz: Here are the films The Times’s critics and writers would nominate for best picture, including “The Forty-Year-Old Version,” “Sound of Metal” and “Minari.”

One of the revolutionary artistic mediums of the 20th century? Collage, as evidenced in the Spanish painter Juan Gris’s “Still Life: The Table,” made from newsprint, wallpaper and several other paper stocks. Explore it here.

Stream these 10 classical concerts in February.

The pangrams from yesterday’s Spelling Bee were cardigan and carding. Today’s puzzle is above — or you can play online.

Which top government jobs have still never been held by a woman? What did Anthony Fauci endure over the past year? And what’s going on in the above photo? Take this week’s News Quiz, and see how well you do compared with other Times readers.

Thanks for spending part of your morning with The Times. See you Monday. — David

P.S. A hidden haiku from The Times’s coverage of the latest G.D.P. numbers: “The late-year slump was / driven by a slowdown in / consumer spending.”

Today’s episode of “The Daily” is about the followers of the QAnon conspiracy theory. On “The Ezra Klein Show,” Paul Krugman discusses the state of the economy.

Lalena Fisher, Claire Moses, Ian Prasad Philbrick, Tom Wright-Piersanti and Sanam Yar contributed to The Morning. You can reach the team at themorning@nytimes.com.

SEOUL — One day, she was an ordinary working woman in South Korea, married with a son and designing ads for one of the country’s largest convenience store chains. The next day, she was branded a man-hating feminist on web forums popular with men, a “cancer-like creature” among an “anti-social group” of “feminazis.” The hostility […]

We’re covering a shootout and a search for assassins in Haiti, and Olympic spectators being barred as Tokyo’s virus situation worsens. Haiti hunts down assassins of president Nearly 24 hours after the assassination of President Jovenel Moïse of Haiti, the security forces engaged in a chaotic shootout with a group they described as suspected assailants, […]

Options markets point to a potential bounce for U.S. stocks

China rare earth magnet exports to U.S. slide by a fifth in November