Chancellor Rishi Sunak has been urged by the CBI to extend the government’s furlough and business rates holiday schemes – and to act before March’s budget.

The business group said firms needed to know whether financial lifelines that have helped them survive through the coronavirus crisis will be available as they plan for the months ahead.

Britain’s furlough scheme – subsidising wages for temporarily laid-off workers – is currently due to run until the end of April.

Live COVID news from UK and around the world 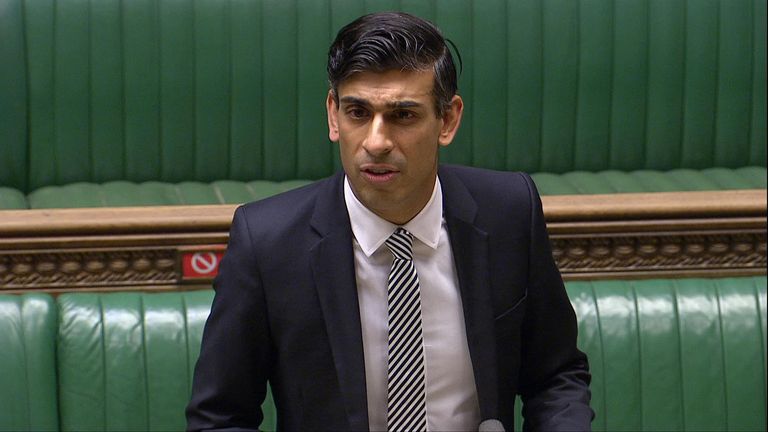 Business rates relief for firms forced to close during the pandemic runs to the end of March.

The CBI estimated the cost of extensions to the furlough scheme and rates relief to the end of June at £6bn and £1.3bn.

It made the submissions ahead of Mr Sunak’s budget but, as firms suffer a further squeeze under latest lockdown measures, it wants the chancellor to act sooner to ensure their survival as the economy reopens.

CBI director-general Tony Danker said: “Many tough decisions for business owners on jobs, or even whether to carry on, will be made in the next few weeks.

“If the government plans to continue its support then I urge them to take action before the budget which is still more than six weeks away.

“The government has done so much to support UK business through this crisis, we don’t want to let slip all the hard work from 2020 with hope on the horizon.

“The rule of thumb must be that business support remains in parallel to restrictions and that those measures do not come to a sudden stop, but tail off over time.

“Just as the lifting of restrictions will be gradual, so must changes to the government’s sterling support to businesses.”

The Treasury has already committed tens of billions of pounds in furlough support as part of an unprecedented spending package which is set to push borrowing to wartime levels, most recently adding to the help by announcing billions in grants for the worst hit firms.

The CBI’s intervention comes as the chancellor faces questions over how long to continue the government’s support for business and when and how to start to repairing the public finances – by cutting spending and raising revenues, for example by increasing corporation tax.

But Mr Danker said: “It would be wrong to raise business taxes when we don’t have a recovery.”

On Monday, Treasury minister Jesse Norman played down the need to hike taxes given the possibility of a strong economic recovery after the pandemic.

He told MPs on the Treasury select committee: “We may end up with a somewhat delayed but nevertheless very pronounced bounce.”

Yes, you can make a personal budget in just 25 minutes

NEW YORK • Now is a great time to develop a serious budgeting habit. The next year might bring changes to your annual income and you should look at your finances now so that you are prepared for them. A nation can run deficits; households should avoid them. People without budgets are more likely to […]

(Reuters) – Activist investor Carl Icahn has sold more than half his stake in Herbalife Nutrition back to the company for $600 million at $48.05 a share and has given up the five seats on the firm’s board held by his representatives, Herbalife said in a statement.FILE PHOTO: An Herbalife logo is shown on a […]

Carrefour to buy 30 stores in Brazil from rival Makro

FCC to move forward on C-Band auction, may back incentives to shift spectrum: source