Neil Sheehan, the Vietnam War correspondent and Pulitzer Prize-winning author who obtained the Pentagon Papers for The New York Times, leading the government for the first time in American history to get a judge to block publication of an article on grounds of national security, died on Thursday at his home in Washington. He was 84.

Susan Sheehan, his wife, said the cause was complications of Parkinson’s disease.

Mr. Sheehan, who covered the war from 1962 to 1966 for United Press International and The Times, was also the author of “A Bright Shining Lie: John Paul Vann and America in Vietnam,” which won a National Book Award and a Pulitzer in 1989. Reviewing it in the Times, Ronald Steel wrote, “If there is one book that captures the Vietnam War in the sheer Homeric scale of its passion and folly, this book is it.”

Intense and driven, Mr. Sheehan arrived in Vietnam at age 25, a believer in the American mission. He left, four years later, disillusioned and anguished. He later spent what he described as a grim and monastic 16 years on “A Bright Shining Lie,” in the hope that the book would move Americans finally to come to grips with the war.

“I simply cannot help worrying that, in the process of waging this war, we are corrupting ourselves,” he wrote in The New York Times Magazine in 1966. “I wonder, when I look at the bombed-out peasant hamlets, the orphans begging and stealing on the streets of Saigon and the women and children with napalm burns lying on the hospital cots, whether the United States or any nation has the right to inflict this suffering and degradation on another people for its own ends.” 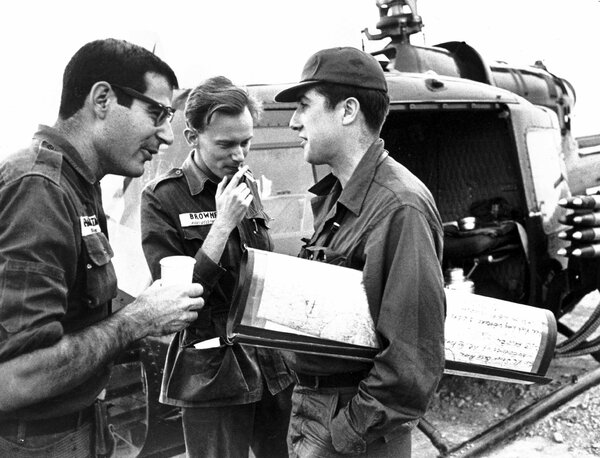 Mr. Sheehan’s readiness to entertain the notion that Americans might have committed war crimes prompted Daniel Ellsberg, a former Defense Department analyst who had turned against the war, to leak the Pentagon Papers, a secret government history of American decision-making on Vietnam, to him in 1971. The papers revealed that successive administrations had expanded U.S. involvement in the war and intensified attacks on North Vietnam while obscuring their doubts about the likelihood of success.

At 7,000 pages, the leak was the largest disclosure of classified documents in American history up to that point. After the third day of The Times’s coverage, the Nixon administration got a temporary injunction blocking further publication. The Supreme Court’s ruling 17 days later allowing publication to resume has been seen as a statement that prior restraint on freedom of the press is rarely justified. The Times won a Pulitzer, for public service, for its coverage by Mr. Sheehan and others.

In the days after the temporary injunction against the Times, The Washington Post and several other newspapers began publishing their own articles on the Pentagon Papers — only to be blocked themselves until the Supreme Court upheld the right of The Times and The Post to publish.

The next year, Mr. Sheehan took a book leave from The Times after attending the funeral of John Paul Vann, a charismatic, idealistic former Army officer and outspoken dissenter on the war, whom Mr. Sheehan had known in Vietnam. He set out to write the history of the war through the figure of Mr. Vann, who seemed to Mr. Sheehan to embody the qualities that Americans admired in themselves, and to personify the American venture. He expected the book to take three to five years.

But he lost more than a year recovering from a head-on collision with a car that a young man was driving on the wrong side of a road. Mr. Sheehan repeatedly ran out of money. His subjects, humanity and war, proved more complicated than even he had known.

Disciplined and nocturnal, he worked regularly until 4 a.m. Impressed by Truman Capote’s “In Cold Blood,” he labored to give his book — a combination of history and biography — the narrative drive of a novel. “It was a grim business,” he said. He was, he said later, less obsessed than trapped.

Cornelius Mahoney Sheehan was born on Oct. 27, 1936, in Holyoke, Mass., a son of Irish immigrants. His father, Cornelius Joseph Sheehan, was a dairy farmer, and his mother, Mary (O’Shea) Sheehan, was a homemaker.

Neil (his nickname from the time he was born) grew up on his family’s dairy farm outside Holyoke, attending Mass with his two brothers every Sunday at his mother’s insistence. He received full scholarships to both the Mount Hermon prep school in Massachusetts and Harvard, where he studied Middle Eastern history and graduated in 1958.

He then joined the Army, becoming a journalist to get out of a job as a pay clerk in Korea. Transferred to Tokyo to put out the division newspaper, he moonlighted for United Press International, which hired him in 1962 and sent him to Saigon as a reporter, two weeks out of the Army, for $75 a week.

He was one of the youngest and least experienced of a group of celebrated correspondents that included David Halberstam of The Times, who became his collaborator and friend. In 1964, The Times hired Mr. Sheehan and sent him back to Vietnam. Impassioned and haunted, he had what his wifelater called “a quasi-religious streak.” By 1966, he wrote, the moral superiority that the United States had possessed after World War II had “given way to the amorality of great power politics.”

In The New York Times Book Review in December 1970, he wrote that the United States “desperately needs a sane and honest inquiry into the question of war crimes and atrocities in Vietnam.”

Three months later, he concluded that there was no moral or legal difference between the killing of 25,000 noncombatants in the Philippines during World War II, for which the United States had tried and hanged a Japanese general, and the deaths of tens of thousands of civilians in Vietnam. “The more perspective we gain on our behavior, the uglier our conduct appears,” he wrote.

Mr. Ellsberg, who had copied the Pentagon Papers illicitly in the hope of hastening the end of the war, wrote in his 2002 memoir that he had offered them to Mr. Sheehan and later gave him a key to the apartment in Cambridge, Mass., where he had stashed them. He told Mr. Sheehan he could make notes but not photocopy the documents. He learned only later, he wrote, that Mr. Sheehan had returned when Mr. Ellsberg was out of town, removed the papers, photocopied them and taken the copies back to The Times.

Convinced that the papers were too important for him to run the risk that they might never be made public, Mr. Sheehan took advantage of Mr. Ellsberg’s absence from Cambridge to override his instructions, spiriting the copied documents back to Washington in bags strapped onto an airplane seat beside him.

Accepting an award later that year, Mr. Sheehan said that The Times, in publishing the papers, had given “to the American people, who had given to those who governed us 45,000 of their sons and $100 billion of their treasure, a small accounting of a debt that can never be repaid.”

“But if to report now be called theft, and if to publish now be called treason, then so be it,” he added. “Let God give us the courage to commit more of the same.”

Mr. Sheehan was the author of three other books, including “After the War Was Over: Hanoi and Saigon,” based on a trip to Vietnam in 1989, and “A Fiery Peace in a Cold War: Bernard Schriever and the Ultimate Weapon” (2009), a history of the arms race and the story of the Air Force general responsible for the creation of America’s intercontinental ballistic missile system.

In addition to his wife, Mr. Sheehan is survived by two brothers, Patrick and Eugene; two daughters, Maria Sheehan and Catherine Sheehan Bruno; and two grandsons.

“Some days I wake up and I think, I’m not young anymore, I’ve got a bum knee, I’ll never be able to jump out of a helicopter again like I used to do in the Mekong Delta,” Mr. Sheehan was quoted as saying in an article by his wife, published the year after “A Bright Shining Lie” came out. “But then I think, ‘What the hell, age catches up with you whatever you do, and I’ve been lucky. I saw more of our daughters than most fathers do, and I wrote the book I wanted to write.”

SINGAPORE (Reuters) – Stocks made a meandering start to the second half of 2021 on Thursday, dipping in Asia on worries about new coronavirus infections and fresh lockdowns, while bond markets were on edge and the dollar crept higher ahead of U.S. labour data.FILE PHOTO: A man wearing a protective face mask, following the coronavirus […]

LONDON (Reuters) – Stocks slipped on Thursday as investors waited for signs of agreement on a U.S. stimulus package, while the U.S. dollar slumped to a two-year low on fears that the recovery in the world’s biggest economy was lagging others. European stocks edged down in volatile trading, with Frankfurt gaining 0.2% as investors digested […]