The European Commission President claimed EU and UK officials are closing in on agreement in most areas but are still yet to overcome their differences on the main sticking points. And British officials were also warning that while progress had been made the two sides “remain far apart”. Mrs von der Leyen told the European Parliament that disputes over future common standards and fishing rights continue to block significant progress in the wrangling over the future relationship pact.

She said: “I cannot tell you whether there will be a deal or not. But I can tell you that there is a path to an agreement. Now, the path may be very narrow, but it is there.”

As negotiations continue in Brussels, the top eurocrat said officials had “found a way forward on most issues”.

She added: “This is now a case of as being so close and yet being so far away from each other because two issues still remain outstanding you know them a level playing field, and the fisheries.” 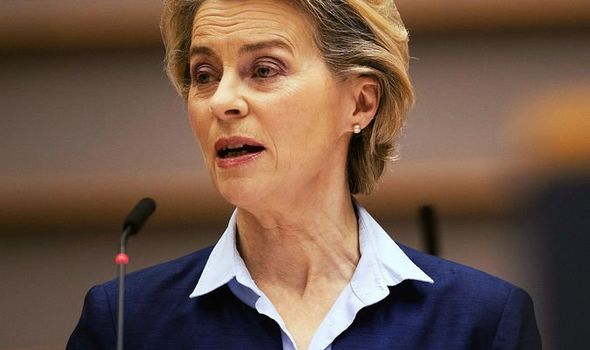 But the Commission chief said she was unsure whether both sides would ever be able to overcome their differences in the talks over post-Brexit fishing quotas.

“The discussion is still very difficult,” she told MEPs.

“We do not question the UK sovereignty on its own waters. But we asked for predictability and stability for our fishermen and our fisherwomen.

“And in all honesty, it’s sometimes feel that we will not be able to resolve this question. But we must continue to find to try finding a solution.”

With a growing number of MEPs angry at the prospect of being sidelined from the EU’s ratification process, Mrs von der Leyen urged them to support her negotiating team until the final minutes and back any deal.

She concluded: “The next days are going to be decisive. So, I know deadlines have been missed, time and again. The clock puts us all in a very difficult situation, not least this parliament and its right to exercise democratic scrutiny and ratification.

“That is why I sincerely thank you for your support and understanding. And I know that if we do get there, I can count on you to ensure a good outcome.

“We must all walk these last miles in the same shoes.”

He said: “We hope the next few days will shed more light on another major issue in terms of our relations with the United Kingdom.”

Boris’s Brexit threats to EU are NOT a bluff – ‘Should have walked away MONTHS ago!’

We will use your email address only for sending you newsletters. Please see our Privacy Notice for details of your data protection rights. The Prime Minister is planning new legislation that could override parts of the Brexit withdrawal agreement. The proposed internal market bill could “eliminate the legal force of parts” of the agreement such […]

We will use your email address only for sending you newsletters. Please see our Privacy Notice for details of your data protection rights. Maroš Šefčovič, vice-president of the European Commission who co-chairs a EU-UK committee implementing the Brexit withdrawal agreement said the EU would enforce full customs and regulatory checks immediately after Brexit. Mr Šefčovic said […]

We will use your email address only for sending you newsletters. Please see our Privacy Notice for details of your data protection rights. UK and European Union negotiators are meeting in Brussels this week for the ninth and final round of talks as both sides desperately try to find a crucial breakthrough and thrash out […]

A Different Kind of Land Management: Let the Cows Stomp