Ms. Yellen promised an agenda to promote “investments that will create jobs and address the tremendous challenge of climate change.” Mr. Biden introduced Mr. Deese by calling him the first N.E.C. director who is a “true expert on climate policy.”

Both were clear signs that, even as Mr. Biden confronts the immediate task of accelerating the pandemic recovery, he has placed the longer-running climate challenge at the center of his administration’s economic priorities.

That climate focus is expected to influence the incoming administration’s initial plans to support the economic recovery. Ms. Yellen, Mr. Deese and Neera Tanden, the nominee to head the White House Office of Management and Budget, are preparing to weave efforts to reduce greenhouse gas emissions and accelerate clean energy production into the economic stimulus legislation that his team is crafting. It is also expected to play a heavy role in a broader infrastructure initiative that could be one of Mr. Biden’s best hopes for a major bipartisan bill in his first year in office.

Climate is also expected to influence his economic approach more broadly, with his team preparing to use the government’s vast regulatory powers to advance a climate agenda through financial regulations that could further accelerate the deployment of wind and solar energy, electric cars and other initiatives to reduce emissions — an approach that Mr. Biden’s team insists will create jobs.

Those close to Mr. Biden, who has pledged to take a “whole of government” approach to climate change, said he is purposefully putting what scientists believe is the world’s largest looming crisis at the heart of the agencies most responsible for promoting the country’s economic security.

“Historically we have looked at climate change as an environmental issue,” said Christy Goldfuss, a former head of the White House Council on Environmental Quality under President Barack Obama, where she worked with Mr. Deese on a so-called green team that helped negotiate the multinational Paris agreement on climate. What Mr. Biden has done, she said, “is center climate policy in his economic team.”

Ms. Goldfuss and other climate and economic policy experts said they expect Mr. Biden’s economic team, led by Ms. Yellen, to continue sounding the alarm about the growing costs of not reducing emissions.

According to a 2018 government assessment, natural disasters and other extreme weather events driven by a warming planet could cost the United States 10.5 percent of its gross domestic product by 2100. This year alone, according to the National Oceanic and Atmospheric Administration, there were 16 billion-dollar weather and climate disasters across the country between January and September. That figure did not account for the wildfires that raged across the West, which caused an estimated $10 billion in damage.

Several of Mr. Biden’s early economic picks are longstanding voices for emissions reduction as an economic imperative. In 1998, Ms. Yellen, then the head of President Bill Clinton’s Council on Economic Advisers, asked Congress to “consider the costs of inaction,” warning of “catastrophic risks” to the United States amounting to billions of dollars annually because of impending extreme weather events.

“To what extent are we willing to take such chances with our planet?” she asked lawmakers during one of the more than half-dozen trips she made to Capitol Hill that year testifying in favor of the Kyoto Protocol, the first global agreement to curb planet-warming greenhouse gas emissions, which the Senate ultimately rejected.

She was less vocal about climate risks in her highest-profile economic policy position, as chair of the Federal Reserve; after her departure from the job in 2018, she called for climate action, including a tax on carbon earlier this year.

Mr. Aldy and others say they expect a Yellen Treasury to focus on a wide range of regulations touching climate issues, including the insurance industry’s consideration of climate change and how rising global temperatures could affect the solvency of Medicare and Social Security.

Perhaps most importantly, they expect Treasury and other financial regulatory agencies to lean on investors and the business community to manage climate risks. 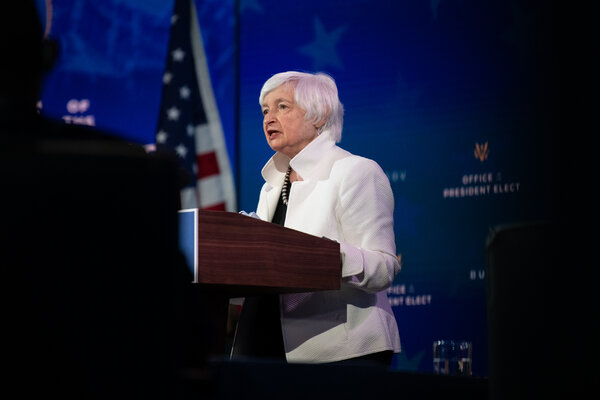 Justin Guay, the director of global climate strategy for the Sunrise Project, an environmental group based in Australia that focuses on pushing financial institutions to address climate change, said that would be a key step in helping companies pursue decarbonization targets, and financiers to shift investments away from fossil fuels. But he also called it a minor one.

“That will look night and day compared to the Trump years,” Mr. Guay said. Still, he noted, most major companies are doing that kind of work, so “it’s a low bar for action.”

He and other progressive climate activists said they hope to see Mr. Biden’s economic team use the levers of the 2010 Dodd-Frank legislation, which created a batch of new regulations and other efforts meant to reduce risk in the financial system, to address climate change. They are pushing the new administration to follow the logic of recognizing the financial risk posed by climate change and enact regulations to prevent banks, asset managers and other financial institutions from financing coal, oil and gas projects.

Some other specific financial regulations that experts said could come early, and which Mr. Biden campaigned on, include requiring public companies to disclose the climate risks and greenhouse gas emissions in their operations and supply chains.

“Climate is the granddaddy of all risk, and the Biden administration wants to shine light on it. The next logical step would be to regulate that,” Mr. Guay said. No matter what the ultimate makeup of the Senate, he added, “They have enormous regulatory powers under Dodd-Frank to curtail speculative activities that could lead to the next financial meltdown.”

That trend is already somewhat underway. Several major American banks and international banks have announced policies over the past year prohibiting or limiting investment in new oil and gas projects in the Arctic, including the Arctic National Wildlife Refuge. Bank of America recently joined them. The Trump administration, which has been openly hostile to climate science and promoted fossil fuel development, has sought to force banks to continue lending to fossil fuel infrastructure.

The most immediate area in which the climate expertise on Mr. Biden’s economic team is likely to come into play is in whatever coronavirus stimulus relief package and subsequent infrastructure package Mr. Biden is able to move through Congress in the early months after inauguration.

Extending and expanding tax credits for wind and solar power is one priority area, but moving to allow the Department of Energy to fund “green” banks to support clean-energy infrastructure is likely also on the table. Officials at the U.S. Chamber of Commerce urged Mr. Biden and Congress to include clean energy components in an infrastructure package in a news briefing earlier this year.

“That could be a big piece in the stimulus negotiations,” said Tim Profeta, director of Duke University’s Nicholas Institute for Environmental Policy Solutions and co-author of a set of recommendations called “Climate 21” that former Obama administration climate officials released recently.

Another influential set of climate recommendations, under the heading of a “100 percent clean future,” was published in 2019 by Ms. Goldfuss and her colleagues at the liberal Center for American Progress think tank in Washington, where she is senior vice president, energy and environment policy. The president of that think tank, and a champion of that report, is Ms. Tanden, the nominee for budget office director.

The Biden administration could also advance recommendations that the Commodity Futures Trading Commission issued earlier this year. It called for bank regulators to roll out climate stress tests, and for a repeal of a Trump administration rule that bars retirement investment managers from considering environmental consequences in their financial recommendations.

The C.F.T.C. also called for a tax or other means of enacting a price on carbon emissions, which economists have described as the most effective way of driving down planet-warming pollution but is fiercely opposed by both conservatives and some liberal groups. Several economists who favor a carbon tax said they are not optimistic about the Biden administration supporting it.

Asked about the likelihood of Mr. Biden making a strong push on climate change in a stimulus package, Senator John Barrasso, Republican of Wyoming, said he worries about liberal Democrats “taking him much further to the left than he ever would have chosen by himself.”

Much of the task of crafting a stimulus package with climate elements could fall to Mr. Deese. He served as a senior adviser to Mr. Obama on climate change and helped to coordinate domestic policies like limits on power-plant emissions, before most recently working for the asset management giant BlackRock as its sustainability director.

Mr. Deese helped the Obama administration implement the economic stimulus package that passed in 2009, in the midst of a recession triggered by financial crisis. Environmental groups and others credit that package, which included several enticements for low-carbon energy production, with helping to rapidly cut the cost of wind and solar power production over the course of a decade.

Ms. Goldfuss called that bill “the most successful climate policy to date in this country” and said the next stimulus package must go further, to promote electric vehicles, advanced batteries and other emissions-reducing technologies.

“Every one of those requires creating jobs, if you do it right,” she said.

The Bank of New Zealand has been warned by the Commerce Commission over likely responsible lending breaches and a failure to provide timely and accurate information to borrowers. The bank reported 15 potential breaches of the Credit Contracts and Consumer Finance Act 2003 to the commission in late 2018. The potential breaches related to some […]

How to get through the holidays without going broke

The holidays are usually filled with joy and celebration, but I think we can all agree that this year feels drastically different. This is especially true for new grads and young professionals feeling the strain on their finances. While your friends and families may not all be dealing with the same pressures you face — […]

VERSAILLES, France (Reuters) – European Union leaders will say on Friday they want to cut their dependence on global suppliers of food, microprocessors, drugs, raw materials and digital technologies, as Russia’s invasion of Ukraine added a new argument for the EU to be more self-reliant.FILE PHOTO: European Union flags fly outside the European Commission headquarters […]