WASHINGTON — In his third floor office in the Treasury Department, Steven Mnuchin, the Treasury secretary, keeps for posterity a stack of documents that he signed in March authorizing the Federal Reserve’s emergency lending programs as the pandemic roiled financial markets.

The programs — which funnel money to corporations, midsize businesses and municipalities — were announced in a frenzied few days, with Congress ultimately providing $454 billion to the Treasury to help absorb any losses. The central bank’s willingness to intervene soothed investors and helped prevent the health and economic crises from melting down the financial system. Stabilizing the markets in the middle of the crisis with little cost to the federal government has been a point of pride for Mr. Mnuchin.

But in one of his final acts as President Trump’s Treasury secretary, Mr. Mnuchin moved last month to pull the plug on five of the programs and claw back the bulk of the money invested in them, saying he was following congressional intent and the law forced his hand — which several outside lawyers dispute.

The decision, which was not supported by the Fed, has ensnared Mr. Mnuchin in controversy. Democrats accuse him of being an economic saboteur intent on undercutting the incoming Biden administration by limiting its ability to use the programs amid continuing economic weakness.

Mr. Mnuchin insists the opposite, saying he was honoring congressional intent in ending the programs, and was trying to help the economy. He is pushing Congress to repurpose the funds he is clawing back for another stimulus package that would help households and businesses more directly.

“I spent the last four months trying to work with Congress to get additional legislation passed,” Mr. Mnuchin said last week in a heated exchange during a House Financial Services hearing. “These programs were not being used, and I’ve worked every day to try to get Congress to pass more legislation.”

He is expected to face additional criticism on Thursday for ending the programs when he testifies before the Congressional Oversight Commission about his management of stimulus funds.

The fate of the more than $400 billion pot of Fed-related money is now at the center of stimulus talks, as Mr. Mnuchin urges lawmakers to repurpose it to pay for small business loans and other forms of assistance. Redirecting the Fed funding is likely to add to the deficit. But the maneuver might offer Republicans the veneer of fiscal responsibility they need to get on board with a package.

Still, reaching agreement is far from guaranteed, with Republicans, Democrats and the Trump administration still at odds over providing liability protections for businesses, money for states and cities and how much funding to allocate for direct payments and unemployment insurance. On Tuesday, Mr. Mnuchin offered Democrats a $916 billion package that Speaker Nancy Pelosi rejected as “unacceptable,” leaving the proposal from the administration in limbo.

Whether Mr. Mnuchin’s move helps usher in more congressional support will have a significant effect on the Biden administration’s ability to address an economic crisis that shows no signs of waning in the near term, with millions still out of work and businesses struggling as the virus surges.

His decision is not without risk. Many of the Fed’s lending programs are meant to work as backstops — they support markets by existing as a last-resort option that keeps private money flowing. They have been lightly used, in some cases because markets have calmed since they were announced and in others because they come with high interest rates and paperwork.

Ending them means that markets, businesses and governments will lack the security blanket they provided going forward. If things go well, it will not matter much, but if they go badly, it creates a vulnerability.

Mr. Mnuchin made two distinct choices when it came to the Fed programs. He decided not to extend them past Dec. 31, which the law allowed but did not necessitate, according to outside lawyers, including Hal S. Scott at Harvard Law School.

His second decision — to claw back any unused money — is not required by the law, Mr. Scott said. In fact, the legislation states that such funds automatically roll back in 2026.

By taking it back now, Mr. Mnuchin could limit the next Treasury secretary’s options.

If the Treasury’s investments in the Fed facilities were to remain outstanding into 2021, the next secretary could interpret the law differently, reopen the programs and — in concert with the Fed — revise their lending terms to make them more attractive to would-be borrowers.

Some Democratic strategists had been considering just that, eyeing the programs as a way to get money to state and local governments if congressional help was hard to pass by lowering borrowing costs in the Fed program that lends to municipal governments.

The programs could still be restarted next year — but at a smaller scale. Mr. Mnuchin’s successor could offer the Fed perhaps $50 billion from an older pot of Treasury money. With less funding to back them up, the programs would most likely need to take on less risk, which could hamstring efforts to make the programs more generous.

Mr. Mnuchin said last week that he had told Janet L. Yellen, Mr. Biden’s Treasury secretary nominee, that his actions were not politically motivated and that he was following the law. Recounting the conversation, which took place as part of the transition process, Mr. Mnuchin said that Ms. Yellen did not offer her own interpretation.

But his position that the programs must sunset at year-end became public only after Mr. Biden won the 2020 election, making the move appear political. As recently as early November, senior officials in the Treasury Department were mulling whether to extend the programs, and gave no indication that they believed Congress had planned for the efforts to stop in December while hashing out a deal in March.

On Nov. 19, Mr. Mnuchin abruptly declared that he had believed all along that the programs could not continue past year-end using the appropriated money and asked the Fed to give back unused investments. The Fed, which agreed to return the money, said in a statement that it would “prefer that the full suite” of programs “continue to serve their important role as a backstop for our still-strained and vulnerable economy.”

Senator Chuck Schumer, Democrat of New York, who wrote the law in his office with Mr. Mnuchin, takes the view that it was absolutely not the intent of Congress for the facilities to end in December, his spokesman said. They were intended to exist through the crisis, which is clearly not over, he added.

Mr. Mnuchin’s critics contend that he caved to the wishes of Senate Republicans while acting vindictively to leave the Biden administration with a weaker arsenal to fight the crisis.

Senator Sherrod Brown, Democrat of Ohio, has accused Mr. Mnuchin of trying to “sabotage the economy.” In an interview on Monday, Mr. Brown said Ms. Yellen and the Fed chair Jerome H. Powell should reopen some of the five shuttered Fed programs, often called 13-3 facilities for the legal provision that enables them.

“I want us to move forward with the 13-3 facilities next year when Yellen and Powell are in charge,” Mr. Brown said, adding “I think Yellen wants to.” He declined to say whether he and Ms. Yellen had discussed reopening the programs. 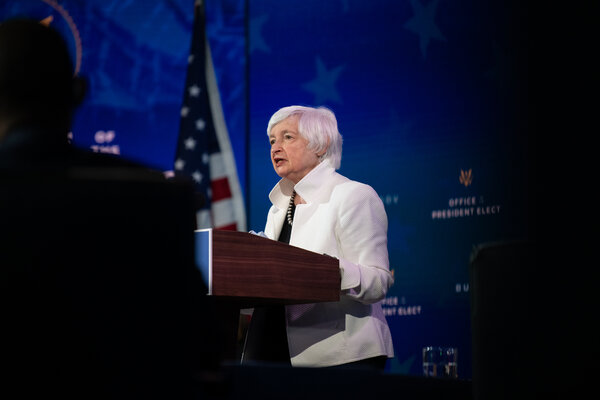 Others suggest that Mr. Mnuchin was making a political gamble to try to help the economy since some Republicans would be more comfortable with a new spending package if part of the funding came from “repurposed” Fed money.

But such a move would largely be superficial. The original funding was meant to back up loans that would repaid, so it was not expected to add to the deficit. If it is redirected toward spending programs, it would result in a budgetary cost. Still, “there might be a political or a moral argument that one can make to a lawmaker” that using money that had already been earmarked — even though it was counted as having no cost — is somehow better, said Ernie Tedeschi at Evercore ISI.

That idea does seem to be gaining traction: The clawed-back funds are being counted toward a $908 billion compromise package in the Senate, with lawmakers emphasizing that between the Fed money and other repurposed appropriations, it will cost just $348 billion in “new spending.”

If no plan passes, lawyers and strategists say that Ms. Yellen, if confirmed, could try to retrieve the funding by challenging Mr. Mnuchin’s reading of the law. But doing so would come at a political cost.

“This will set the tone for her time as Treasury — I don’t think she’s going to want to poke Senate Republicans in the eye by doing something that they don’t want,” said Jeremy Kress, a former Fed regulator now at the University of Michigan.

Those lawmakers have carried the day so far. Current and former Treasury officials acknowledge that the law is ambiguous but say Mr. Mnuchin felt an obligation to honor commitments that he made to Senate Republicans during the negotiations.

“The statute was unclear and the secretary interpreted the statute the way he felt was best,” said Christopher E. Campbell, assistant secretary of the Treasury for financial institutions from 2017-18. “I’ve never seen him to be an overly political person and I don’t ascribe any negative or nefarious actions to the timing.”

A group of Trump supporters waving campaign flags disrupted the second day of early voting in Fairfax, Va., on Saturday, chanting “four more years” as voters entered a polling location and, at one point, forming a line that voters had to walk around outside the site. County election officials eventually were forced to open up […]

Brexit: Peter Bone shuts down McDonagh over trade deal The Conservative MP stated that the UK trading with the European Union on World Trade Organisation terms would be more damaging for the trading bloc than Britain. Mr Bone added that duties and tariffs collected from trading with the EU on WTO terms could be used […]

U.S. Congress wrestles with mechanics of voting in coronavirus crisis