BBC Weather: Temperatures set to drop as mist and fog sets in

The Met Office has issued a series of severe weather warnings since the start of December with three separate warnings in effect on Monday, December 7. A number of flood alerts are also in place across the UK warning of possible flooding today. Up to 10 inches of snowfall is expected to hit some regions of Britain on Monday according to the latest weather maps and several areas will see temperatures drop to colder than Finland today.

The Met Office forecast for Monday warns of dense fog patches and chilly conditions during the day, with some regions likely to see heavy rainfall.

The forecast reads: “Some coastal showers, else most parts dry.

“Some sunny spells, but freezing fog patches slow to clear, and persisting in places.

“Rain across Scotland moving south-westwards, heavy and persistent on high ground with gales around coasts.

“Some coastal showers elsewhere, whilst frost and fog develop inland, especially in the south.” 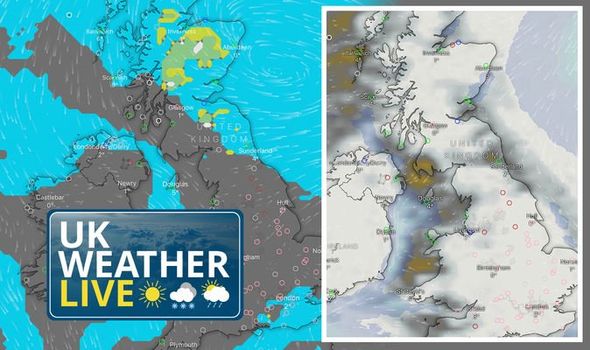 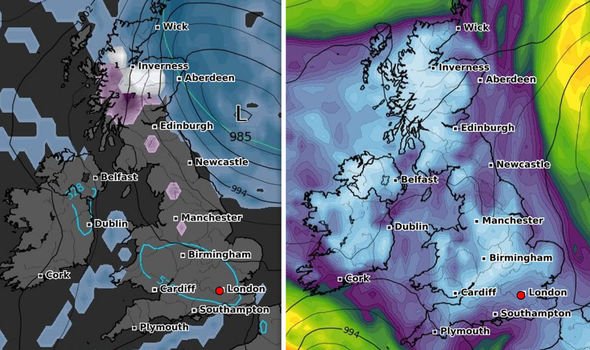 BBC Weather’s Carol Kirkwood warned freezing fog will be slow to clear Monday morning as the Met Office has a yellow weather warning in place for it across southeast England.

She said: “You might not like this weather forecast I’m going to give you because this morning it’s a cold start, it’s a frosty start.

“There’s some fog around as well, some of that is freezing fog and generally today it’s going to be cold and grey.

“If we look at the temperatures at the moment, it’s -3C currently in High Wycombe; -2C in Bury St Edmunds and freezing in Belfast and also in Durham so it gives you an idea how cold it is when you’re just stepping out but the fog will be an issue this morning.”

7.38am update: The Met Office has issued two severe weather warning for rain

The first rain weather warning is in force from 6pm on Monday to 6am on Tuesday and advises of heavy rain leading to localised flooding.

The warning reads: “An area of persistent and heavy rain will spread in from the east on Monday evening, lasting much of the night before clearing to scattered showers by morning.

“With the ground already saturated this likely to lead to flooding in a few areas.”

The regions impacted by the fog weather warning include parts of south-west Scotland including East Lothian, Edinburgh, Midlothian Council and Scottish Borders.

The second warning is in force from 6pm on Monday to 9pm on Tuesday.

The warning reads: “An area of persistent and heavy rain will spread in from the east on Monday evening, lasting much of the night before turning showery on Tuesday.

“Further showers through the day could bring another 0.4 to 0.6 inches (10mm to 15mm) in places. With the ground already saturated, this is likely to lead to flooding in a few areas.”

The affected areas include: 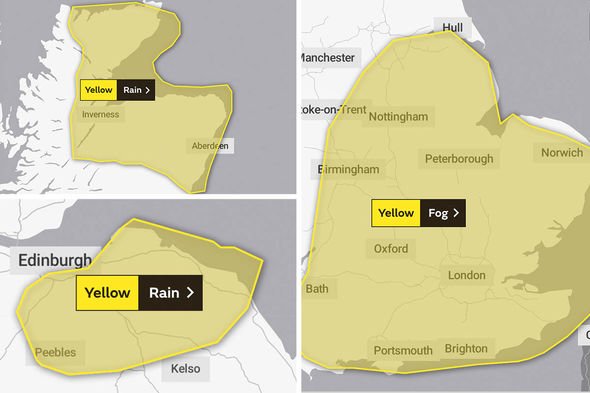 7.33am update: The Met Office has a severe weather warning for fog on Monday

The fog weather warning is in force from 4am to 11am on Monday warning of fog expected across large swathes of the country.

The warning reads: “Fog and freezing fog will affect a large part of England on Monday morning.

“The visibility will drop to less than 100m in places, and with the increased traffic volumes, some transport disruption is possible.

“The fog will slowly lift during the day but will persist in a few places.”

7.16am update: Britain is forecast to experience up to 10 inches of snowfall today

Weather maps show parts of the country could see up to 10 inches of snowfall on Monday as low pressure sweeps across from the east.

WXCharts snow depth maps show there is a 90 percent chance of snow hitting several areas of Scotland including Fort William and Inverness on Monday.

Netweather’s Nick Finnis predicted a cloud of freezing fog to sweep over the many parts of southern and eastern England tonight, bringing a risk of ice.

Five Kwanzaa Celebrations Around the Country

For many Black Americans, the holiday is a time for bonding, joy and repose. The Times visited five households to see how people cook and gather, engage and reflect. By Nicole Taylor Photographs by Nydia Blas, Celeste Noche, Brian Palmer and Timothy Smith Kwanzaa is more than an end-of-year display of deep orange and burnt […]

The resolution was passed by both Houses of Congress in a bipartisan bid to limit the president’s power to use military force against Iran without congressional approval. The US President called it a “very insulting resolution”, arguing that it was “based on misunderstandings of facts and law”. In a statement, he said: “This was a very insulting […]