Good morning. Momentum is growing for more spending on coronavirus relief. What will Mitch McConnell do? 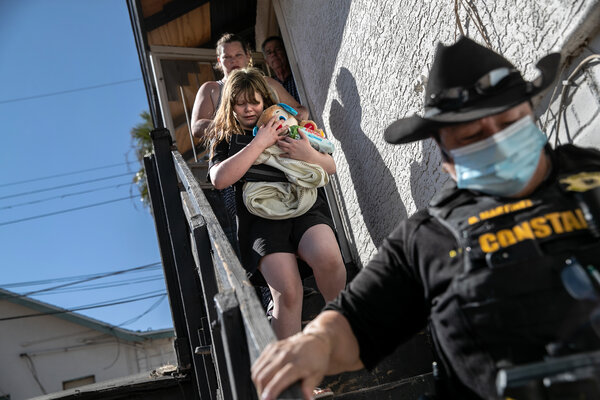 Independent economists overwhelmingly favor the passage of more stimulus money before the end of the year — and the prospects for such a bill seem to be improving.

Democratic leaders in Congress yesterday signaled their openness to a bipartisan $908 billion stimulus package. Democrats would prefer a bigger package, like the $3 trillion bill that the House passed in May. But House Speaker Nancy Pelosi and Chuck Schumer, the Senate Minority Leader, released a statement saying that the bipartisan plan should become “the basis for immediate bipartisan, bicameral negotiations.”

The next move is up to Mitch McConnell and other Senate Republicans, some of whom have previously supported a $500 billion bill. There are political reasons that both sides want to appear responsive to Americans’ economic pain: The Senate runoff elections in Georgia on Jan. 5 will determine which party controls the Senate.

The economy already seems to have slowed in recent weeks, as virus caseloads have risen. And the situation will probably worsen if Congress does not pass another stimulus. Many provisions enacted since the spring are set to end on Dec. 31. Among the effects:

About seven million freelancers, contract workers and other Americans who don’t qualify for traditional jobless benefits will lose their emergency aid. On average, it now equals $1,058 a month.

Close to five million more people who have been out of work for at least six months will also be cut off from aid — which now averages $1,253 a month. The usual limit on jobless benefits is 26 weeks, and a provision that extended it to 39 weeks is expiring.

Several million people could face eviction from their homes, because a federal moratorium will expire.

About 21 million people will have to begin making student-loan payments again.

A tax credit that has given more than 125,000 companies an incentive not to lay off workers will expire. Companies will also lose the ability to defer payroll taxes and take deductions for business losses.

Aid to state and local governments — $150 billion — will expire. Without more aid, those governments will likely need to make cuts to schools, police forces, health care and other programs.

Moody’s Analytics forecasts that without more aid, the economy will fall into a new recession early next year, with the unemployment rate approaching 10 percent. And Jerome Powell, the Federal Reserve chairman, has said that the history of economic crises suggests Congress usually passes too little stimulus, not too much. “Some fiscal support now would really help,” Powell told a Senate committee this week.

Even if the two parties can come to an agreement on Capitol Hill, there is one more hurdle. President Trump would have to sign the bill in his final weeks in office.

After a lull of new cases during the Thanksgiving weekend — probably because of less testing — confirmed infections have begun rising again. Here’s a map of the outbreak in the U.S.

Dr. Robert Redfield, the director of the C.D.C., said the next few months might be “the most difficult time in the public health history of this nation.” He predicted that U.S. virus deaths, which are now around 273,000, could approach 450,000 by February.

The C.D.C. reduced the recommended minimum quarantine time for people exposed to the virus. The old standard was 14 days; now, those without symptoms may end quarantine after seven days with a negative test, or after 10 days without a negative test.

Why did Britain approve Pfizer’s coronavirus vaccine before the U.S. did? Britain has a less rigorous process for approval.

The police broke up a 400-person party at a luxury home on Long Island. Among the calls to the cops? The mansion’s owner, who had rented his property on Airbnb and discovered the gathering while watching his security cameras from afar.

President-elect Joe Biden plans to keep Christopher Wray as F.B.I. director. To make the position less political, the F.B.I. director has a 10-year term. Trump broke with past tradition by firing James Comey in 2017 and naming Wray.

Trump posted a 46-minute video on Facebook filled with conspiracy theories and falsehoods about the election.

Iran says it will begin enriching uranium to a level closer to weapons grade and stop allowing inspections unless the U.S. lifts economic sanctions. The move seems designed to pressure the Biden administration to re-enter the 2015 nuclear deal that Trump abandoned.

Senator David Perdue, a Georgia Republican, has been the Senate’s most prolific stock trader during his time in office — by himself accounting for nearly one-third of all transactions by senators in the past six years.

The Trump administration is changing the U.S. citizenship test. The new version will ask 20 questions rather than 10, including some with a more conservative framing. (Test your own knowledge here.)

Barack Obama said progressives should avoid calls to “defund the police,” arguing it turns off voters and gets in the way of change. He also chided Democrats for not giving Alexandria Ocasio-Cortez, a progressive star, a bigger platform at the Democratic National Convention.

Starting next month, only dogs will be allowed as service animals aboard U.S. flights. The new rules will consider other emotional support animals as pets.

A crowdfunding campaign is seeking to raise at least $5.3 million to buy the longtime home of J.R.R. Tolkien — where he wrote “The Hobbit” and much of the “Lord of the Rings” trilogy — and turn it into a museum.

Will you marry me, Taylor Hollenkamp? Last week, the final entry in our readers’ six-word essays on gratitude was a proposal. It was real — and she said yes. Here’s the full story.

From Opinion: The Justice Department should not prosecute Trump after he leaves office, Eric Posner, a law professor, argues: “Acquittal would be Mr. Trump’s crowning achievement, but even conviction would enhance his political standing with half the country by completing his martyrdom.”

Lives Lived: Rafer Johnson carried the American flag into Rome’s Olympic Stadium in 1960 as the first Black captain of a United States Olympic team. He went on to win gold in decathlon and became a close associate of the Kennedy family. He died at 86.

Football heads toward a chaotic end

Every major U.S. sport that has tried to play during the pandemic has successfully completed its season. But none of the ones that did so this fall — like pro hockey, baseball and both men’s and women’s basketball — had to cope with virus caseloads nearly as high as today’s. Those caseloads are now creating chaos for both pro and college football.

The N.F.L. had to postpone a game between the Pittsburgh Steelers and the Baltimore Ravens three different times, before finally playing yesterday — on a Wednesday afternoon, bizarrely. (The Steelers won, 19 to 14.) On Sunday, the Denver Broncos had to play without any quarterbacks, and the result was what Bill Simmons, the podcaster, called the worst football game he ever watched.

College football has even bigger problems. At least one team, Ohio State, is in danger of missing the playoffs because it has canceled so many games. “History will wonder whether this messy, muddled, and repeatedly interrupted season was worth all the risk,” Jemele Hill writes in The Atlantic.

Some public health officials have decided the answer is no. Santa Clara County, Calif., has banned all contact sports for the next three weeks, which means the San Francisco 49ers can’t play home games. The 49ers will instead play near Phoenix, where case numbers are higher than in Santa Clara.

Both the pro and college seasons still seem more likely to finish than not, given how badly the officials running the sports want to hold their lucrative playoffs. But the finishes may be messy and end up contributing to further spread of the virus or to other injuries, as athletes find themselves playing new positions on depleted rosters.

For more: Kurt Streeter, a Times sports columnist, calls on the N.F.L. to end its season early.

Make Samin Nosrat’s “whatever you want” soup, a great opportunity to use up odds and ends in your fridge.

The Times critics’ list of favorite books of the year includes works by Elena Ferrante and Cathy Park Hong.

Go for a Walk

Here are five minutes that will make you fall in love with Beethoven.

The late-night hosts had a lot to say about pardons.

The pangrams from yesterday’s Spelling Bee were anticlimactic and claimant. Today’s puzzle is above — or you can play online if you have a Games subscription.

Thanks for spending part of your morning with The Times. See you tomorrow. — David

P.S. The word “shipaggedon” — referring to holiday shipping delays — appeared for the first time in The Times yesterday, as noted by the Twitter bot @NYT_first_said.

Today’s episode of “The Daily” is about abuse victims at the Boy Scouts of America. On the latest Modern Love podcast, a widow finds hope in a lifetime of good loving.

Lalena Fisher, Claire Moses, Amelia Nierenberg, Ian Prasad Philbrick and Sanam Yar contributed to The Morning. You can reach the team at themorning@nytimes.com.

A new book reports that Gen. Mark Milley, the chairman of the Joint Chiefs of Staff, improperly restricted the president of the United States’ ability to use military force and committed to warning China, an American adversary, of any impending U.S. military action against it. If the book, “Peril,” by Bob Woodward and Robert Costa, […]

Growing old is an increasingly expensive privilege often requiring supports and services that, whether provided at home or in a facility, can overwhelm all but the wealthiest seniors. With Americans living longer and aging baby boomers flooding the system, the financial strain is becoming unsustainable. Consider the demographics. In 2018, there were 52.4 million Americans […]