By Melina Delkic and Dani Blum

We’re covering new restrictions in Seoul, China’s strategy for dealing with the world and charges in Singapore for a man holding up a smiley face sign. 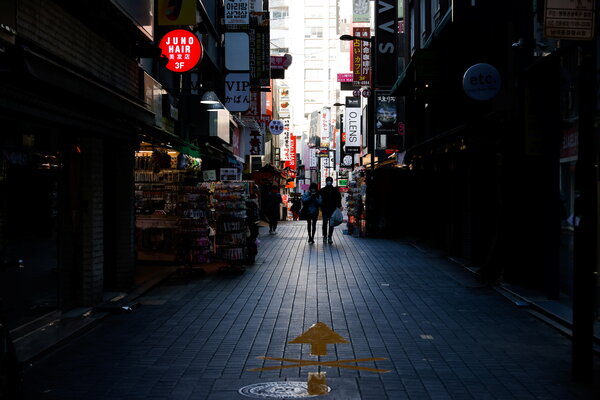 The Seoul city government will close nightclubs and ban late-night dining in restaurants starting Tuesday as South Korea tightens guidelines to battle a surge there in coronavirus infections.

South Korea’s daily caseload rose above 300 for five straight days before dropping to 271 on Monday. Most of the new cases in the recent spike were reported in Seoul and in nearby cities.

Unlike earlier waves that had been clustered around several churches and outdoor rallies, the current surge was more widespread. Officials said it originated in social gatherings where people were without masks. The Korea Disease Control and Prevention Agency has warned that the spike may become the country’s largest wave of infections if the spread is not quickly contained.

Details: The new restrictions include a ban on gatherings of more than 100 people and the closure of nightclubs, dance halls, casinos and other high-risk venues. Other indoor activities will limit opening hours and the number of attendees.

The drugmaker AstraZeneca announced that an early analysis of some of its late-stage clinical trials showed that its vaccine was 70.4 percent effective on average and potentially up to 90 percent effective in preventing Covid-19. It is the third major vaccine developer to announce promising results.

Gyms, stores and hair salons will be allowed to reopen in England next week, Prime Minister Boris Johnson said on Monday, telling lawmakers that for the first time since the spread of the coronavirus, the country could “see a route out of the pandemic.”

With the U.S. and others wary of its growing dominance, China wants to become less dependent on the world for its own needs, while making the world as dependent as possible on China.

It’s globalization with Communist characteristics: The Chinese government promotes the country’s openness to the world, even as it adopts increasingly aggressive and at times punitive policies that force countries to play by its rules.

Case study: Last spring, after Australia called for an investigation into the origins of the coronavirus, China began quietly blocking one import after another from Australia. Still, Australia joined 14 Asian nations in a new regional free-trade deal brokered by China.

Related: A supercomputing center used by the Chinese government for surveillance in Xinjiang is powered by chips made by the American companies Intel and Nvidia. Both companies said that they were unaware of what they called misuse of their technology.

Israeli news media reported on Monday that Prime Minister Benjamin Netanyahu had a secret meeting with Crown Prince Mohammed bin Salman of Saudi Arabia. But the Saudi foreign minister denied that such a meeting had taken place, hours after the reports surfaced. Mr. Netanyahu’s office refused to comment.

If confirmed, it would be the first known meeting to have taken place between high-level Israeli and Saudi leaders.

Context: Israel and the Trump administration have promoted the idea that a diplomatic opening between Saudi Arabia and Israel is only a matter of time. The Saudis have insisted that an Israeli-Palestinian peace deal must happen first.

If you have 7 minutes, this is worth it

In recent weeks, the French police have investigated at least 14 children and teenagers accused of making inappropriate comments during a commemoration for a teacher who was beheaded after showing caricatures of the Prophet Muhammad. In Albertville, a city in the French Alps, officers held four 10-year-olds, including Emira Yildirim, with her mother above, in custody for about 10 hours, on suspicion of “defending terrorism.”

As France grapples with a wave of Islamic attacks, people both in and out of the country have criticized the government’s response, which some say risks conflating ordinary French Muslims with extremists.

Joshua Wong: The Hong Kong activist and two other members of the pro-democracy movement pleaded guilty to unauthorized assembly charges over a 2019 protest. They were immediately jailed and will be sentenced next week.

Biden cabinet: President-elect Joe Biden plans to appoint a former secretary of state, John Kerry, to be his climate czar and nominate Antony Blinken to be secretary of state. The emerging team’s members are well known to foreign diplomats and share a belief in international cooperation, but a wariness of foreign interventions after the wars in Iraq and Afghanistan.

Netflix in India scandal: The American streaming service has become embroiled in religious tensions as nationalist leaders decry scenes in the show “A Suitable Boy.” They are upset about a scene with a Hindu-Muslim couple kissing in front of a Hindu temple.

Sarkozy trial: Nicolas Sarkozy, the former French president, appeared in court on Monday to face charges of corruption and influence-peddling. He is accused of trying to illegally obtain information from a judge by offering to land him a job.

Singapore smiley face charge: Jolovan Wham, a civil rights activist, was charged with illegal public assembly for holding up a cardboard sign with a smiley face on in it. Mr. Wham said the charges against him demonstrate that laws in Singapore can be applied “in ridiculous and overbearing ways.”

Snapshot: Above, boys playing video games in Kabul this month. Young Afghan people are finding escape in a video game that can eerily almost describe the state of the war in their country. Afghan lawmakers are trying to ban the game, called PlayerUnknown Battlegrounds, saying it promotes violence.

Chess anyone?: “The Queen’s Gambit,” a Netflix show about a chess prodigy, has reignited interest in the game and sent chess set sales soaring.

What we’re reading: This Atlantic article on TikTok celebrities and how the app has created a new route to fame. Dani Blum, on the Briefings team, says, “It’s a fascinating look at how tech intersects with teen culture.”

Cook: Turkey cutlets Marsala pair nicely with a mushroom risotto or a pile of rice. They could also be part of your menu if you’re planning a small scale American Thanksgiving.

Read: Barack Obama’s “A Promised Land” and Ayad Akhtar’s “Homeland Elegies” are among the 10 best books of 2020, chosen by the editors of The Times Book Review.

Watch: “Black Narcissus,” an FX mini-series revisits a story of sexual repression in the Himalayas. It also includes a final TV performance by Diana Rigg, who died in September.

Let us help you unwind with our At Home collection of ideas on what to read, cook, watch and do while staying safe at home.

A headline for history

In print journalism, the most momentous events often call for the simplest headlines. MEN WALK ON MOON did not require any great turn of phrase. But which two or three words would declare the winner of the U.S. presidential election atop The New York Times? Our print editors wrote about a debate over a headline that went on for days.

We had to prepare for a wide range of outcomes. In the event of a President Trump win, we preferred TRUMP PREVAILS — nothing fancy, but it would say a lot in two words.

The Biden options included IT’S BIDEN and BIDEN’S MOMENT. But the consensus was that if Joe Biden won, Mr. Trump’s defeat would be a significant part of the story as well.

So, the best course, we felt, was to go straight: BIDEN (verb) TRUMP. The next question: Which verb?

“Defeats feels a tad bland,” said Dean Baquet, the executive editor of The Times, later adding, “Ousts feels like a coup.” Some felt that topples was too close to ousts.

What we needed was simple. Powerfully simple. BIDEN BEATS TRUMP. Clear and crisp, a rapid-fire combination of three five-letter words.

P.S.
• We’re listening to “The Daily.” Our latest episode is about the closure of New York City schools after an initially successful reopening.
• Here’s our Mini Crossword, and a clue: Hollywood Walk of Fame symbol (four letters). You can find all our puzzles here.
• Ezra Klein, the co-founder of Vox, will become our Opinion section’s newest podcast host and columnist.

The panic in the United States over the lack of masks and ventilators for Covid-19 has mostly eased, but please, don’t let those scary few weeks fade too quickly. The scramble for medical equipment was a telling moment for the American economy because it revealed something alarming: The United States can no longer produce what […]

At the end of the Civil War in 1865, Mississippi was a majority-Black state. Republicans, who were the liberals at the time, championed granting Black people the right to vote. The military commander of Mississippi in 1867 started to allow Black people to register to vote for delegates at the Reconstruction constitutional convention. That year, […]

Pandemic won’t cause euro debt crisis, but a North-South divide