WASHINGTON — Senator Bernie Sanders, the progressive Vermont independent, has emerged as a contender for labor secretary in President-elect Joseph R. Biden Jr.’s administration, a prospect that would suit his ambitions of being a warrior for working Americans — and one that makes some Senate Republicans very uneasy.

“I think that is somebody who we know is an ideologue and, well, it would be very unlikely he would be confirmed in a Republican-held Senate,” said Senator John Cornyn of Texas, one of multiple Republicans who said Mr. Sanders, a self-described democratic socialist, would be unlikely to win the chamber’s approval.

It is a testament to the deterioration of the Senate confirmation process that a longtime colleague — even one they vehemently oppose on policy — would face such a Republican roadblock. In the not-too-distant past, fellow senators got considerable leeway from the opposing party if they were selected to join the executive branch.

“The truth is, to the best of my knowledge, there has been a courtesy within the Senate that when a president nominates senators, they have been approved,” Mr. Sanders said in an interview.

The growing senatorial resistance to Mr. Sanders even before any formal action by the new administration reflects the formidable task Mr. Biden faces. Should Republicans hold on to their Senate majority next year, Mr. Biden would be the first president since George Bush in 1989 to enter office without his party controlling the chamber and managing the confirmation process. And that process has grown much more toxic, to the point where senators routinely engage in near-blanket opposition to the picks of a president from the opposite party — if they allow consideration at all.

“It is sort of uncharted waters,” said Lindsay M. Chervinsky, a presidential historian and the author of a book on George Washington’s cabinet. “For most of history, the Senate has given presidents, especially first-term presidents, wide berth. They usually give the president who they want.”

That is no certainty today. Some Republicans, who need to win at least one of two Senate runoff elections in Georgia on Jan. 5 to hold their slim majority, have already made clear that they are not eager to grant much latitude to Mr. Biden when it comes to nominees. They note efforts by Democrats over the past four years to block President Trump’s picks and to force Republicans to clear every time-consuming procedural hurdle even when the final outcome was inevitable.

“I can assure you that there will not be one set of rules for Donald Trump and, should Joe Biden take office, another set of rules for him,” Senator Tom Cotton, Republican of Arkansas, said this week on the radio show of Hugh Hewitt, a conservative host. “What the Democrats have done for the last four years, if it is good for the goose, it is going to be good for the gander as well.” 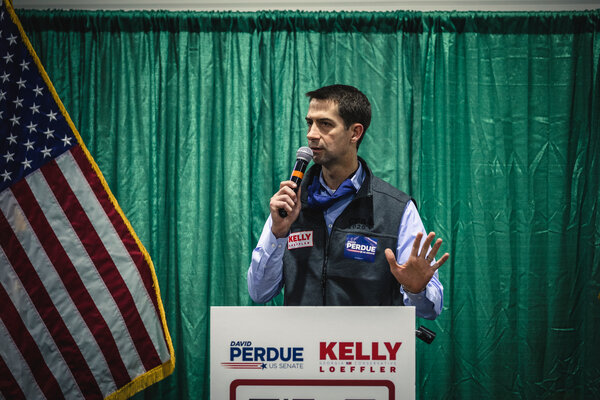 Other Republicans — including Senators Susan Collins of Maine, Lindsey Graham of South Carolina and Lisa Murkowski of Alaska — have indicated they would be willing to back Mr. Biden’s picks as long as they were considered mainstream, acknowledging that a Democratic president is entitled to selections that comport with his views.

They and other Republicans say potential candidates who could meet that test include Senator Doug Jones, the Alabama Democrat who lost his re-election bid this month; Anthony Blinken, a longtime Biden foreign policy adviser; and Senator Chris Coons, Democrat of Delaware and a Biden confidant.

But the overall attitude appears to be one of skepticism, and Republican senators have signaled that rather than feeling an onus to give the president his team, they believe it is squarely on Mr. Biden to find nominees who can pass muster with them. Besides Mr. Sanders, Republicans have also indicated that they would disapprove of nominations of Senator Elizabeth Warren, Democrat of Massachusetts, and Susan Rice, the former national security adviser to President Barack Obama.

Not just the top slots are at issue. The Senate must also confirm scores of other executive branch nominees to lower-level posts that are critical to running sprawling agencies.

If Republicans hold on, it will be up to Senator Mitch McConnell of Kentucky, the majority leader who refused to even consider Mr. Obama’s Supreme Court nominee in 2016, to put nominations on the floor. He is not one to take action that does not have widespread backing from Republican senators and party voters.

“I would hope McConnell wouldn’t put on the floor somebody who has strong opposition in the Republican caucus and with the Republican base,” said Senator Richard C. Shelby, Republican of Alabama.

Just nine cabinet nominees have been rejected by the Senate, while 15 others were withdrawn when confirmation-threatening problems surfaced. High-profile defeats included John Tower, Mr. Bush’s choice for defense secretary, whose nomination failed at the hands of his onetime Senate colleagues, who cited character flaws. He was the last cabinet nominee to be outright defeated and the first former senator to be turned down.

Despite such rare exceptions, top presidential picks historically won fairly easy and quick approval as new administrations took shape and lawmakers wanted to ensure government continuity, sometimes confirming cabinet secretaries by unanimous agreement without a vote. As recently as Mr. Obama’s first term beginning in 2009, several nominees were approved by voice vote on the day he was inaugurated. Hillary Clinton was confirmed as secretary of state by a 94-2 vote on Mr. Obama’s first full day as president.

But the process has become increasingly ugly, with the partisanship ratcheting up in the past decade. Much of the focus has been on judicial appointments and their lifetime tenures, but executive branch jobs have been caught in the crossfire as well. After taking control of the Senate in 2015, Republicans slow-walked some Obama nominees for executive and ambassadorial posts and grudgingly allowed a 56-43 vote of approval for Loretta Lynch as attorney general after months of delay and debate.

Still simmering over the Republican decision to stonewall the Supreme Court nomination of Judge Merrick B. Garland in 2016 and deeming many of Mr. Trump’s nominees unqualified and unfit, Senate Democrats put up the obstacles they could to register their objections.

During the Democratic presidential primary, candidates from the Senate proudly emphasized the number of Trump administration nominees they had opposed. Similarly, Senate Republicans on the ballot in 2022 or considering a run for the presidency in 2024 might be reluctant to be seen as too cooperative with the Biden administration for fear of angering supporters or prompting primary opposition.

Officials with the Biden transition say they are optimistic that the caliber of the incoming president’s choices, his own knowledge of the Senate and the need to confront the coronavirus pandemic will help them move his picks through the polarized chamber.

“His nominees will be experienced, capable and prepared to hit the ground running on Day 1,” said Kate Bedingfield, a transition spokeswoman. “The American people voted for the Biden-Harris ticket in historic numbers, and they expect the Senate to allow the president-elect to put together the competent team he needs to fight this virus and get the economy back on track.”

They also say they are under no illusions about the potential difficulties ahead. They are assembling a high-powered team to build public support for their nominees, though the case of Judge Garland showed that Republicans do not easily succumb to such pressure.

Some Democrats and their progressive allies say that if Mr. Biden is thwarted on personnel issues, he should circumvent the Senate and name acting agency chiefs, as Mr. Trump often did, or use his power to install appointees when Congress is in recess. But the Supreme Court and Senate procedures have combined to significantly narrow the opportunities for recess appointments, and acting officials do not carry the same clout as those who are confirmed by the Senate.

Members of the incoming administration and Senate Democrats would much prefer to have Mr. Biden’s choices win the full Senate stamp of approval, and that includes any Democratic senators put up for cabinet posts if Mr. Biden decides to proceed in that direction.

“I would hope and expect that there would at least be a number of Republican senators who understand it is the prerogative of the sitting president to nominate candidates of his liking,” Mr. Sanders said. “And that they would respect that.”

We use your sign-up to provide content in ways you’ve consented to and to improve our understanding of you. This may include adverts from us and 3rd parties based on our understanding. You can unsubscribe at any time. More info The Foreign Secretary said the policy was inspired by her own experience at a comprehensive […]

WASHINGTON — An intelligence officer traveling in India this month with the C.I.A. director reported symptoms consistent with the so-called Havana syndrome, signaling a possible escalation in the mysterious incidents that have affected American officials since 2016, current and former officials said. The circumstances of the incident are still being investigated, and officials have not […]

HGV crisis: Commentator hits out at 'incompetent' government We use your sign-up to provide content in ways you’ve consented to and to improve our understanding of you. This may include adverts from us and 3rd parties based on our understanding. You can unsubscribe at any time. More info Howard Cox, the founder of Fair Fuel […]