DETROIT — Republican members of a key elections board in the Detroit area refused on Tuesday to certify the county’s election results in a nakedly partisan effort to hold up certification of Joseph R. Biden Jr.’s victory in Michigan over President Trump — only to reverse themselves after an outcry from state officials and Detroit voters.

The initial deadlock and pressure-packed turnaround capped a chaotic day of repeated Republican misfires in the party’s attempt to undermine the election results. Republicans lost a case before the Pennsylvania Supreme Court and faced a skeptical reception in a separate hearing in federal court in Pennsylvania, and an audit in Georgia confirmed there was no foul play with voting machines.

The Republican gambit in Detroit was among the starkest examples of how previously routine aspects of the nation’s voting system have been tainted by Mr. Trump’s effort to challenge his defeat. But its reversal showed the limits of what has been, in essence, an effort to disenfranchise large numbers of Americans. The G.O.P. board members certified the results only after hours of angry comments by citizens, many from Detroit, who accused the Republicans of trying to steal their votes.

At first, the two Republicans on the board said they were voting against certifying the results because many precincts in the county were out of balance, even though the disparities mostly involved a small number of votes. The board deadlocked, with Michigan Democrats denouncing the opposition as a blatantly political intrusion into the process, and criticizing the Republican move as racist.

At one point, a Republican board member, Monica Palmer, had made a motion to “certify the results in the communities other than the city of Detroit” — a move that would effectively disenfranchise one of the nation’s major predominantly Black cities.

Mark Brewer, an election law expert and a former chairman of the Michigan Democratic Party, noted that Ms. Palmer’s motion would have blocked certification for Detroit, where Black residents make up 78 percent of the population, and certified the results for communities like Livonia, where the Black population is 4.4 percent.

“Monica Palmer sat there and said she’s willing to approve the results of the lily-white city of Livonia, which had the second-highest number of out-of-balance precincts, but she won’t certify the city of Detroit,” Mr. Brewer said. “There is no reason to single out the city of Detroit for this racist treatment.”

The deadlock looked at first like a rare win for Mr. Trump, who, despite repeated losses in court and a string of baseless claims, has continued undaunted with a relentless legal, procedural and rhetorical assault on the country’s election system.

Even after the board cleared its initial stalemate, the night provided fresh evidence that, at the very least, Mr. Trump’s campaign is managing to disrupt what has long been an orderly process of certifying the clear winner of the popular and Electoral College votes and ensuring a peaceful transfer of power. Though Mr. Trump’s supporters have appeared to revel in his attacks, the Michigan confusion showcased a counterforce — angry voters who would not abide any possibility that their votes would be nullified in the partisan wrangling.

Though the president faces impossible odds in his attempt to force a different result from the one voters rendered, he and top Republican allies have shown that they have no intention of ceasing their attacks on the voting system. 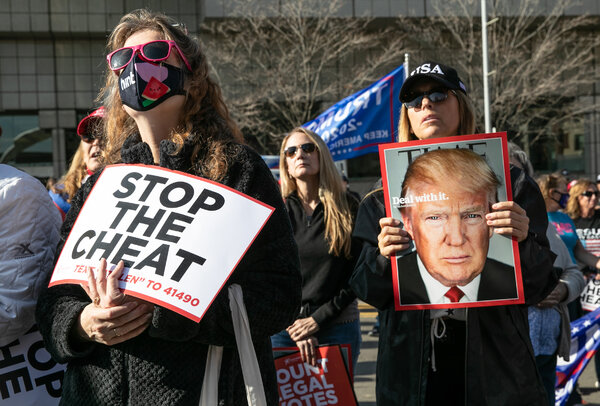 The chairwoman of the Republican National Committee, Ronna McDaniel, a Michigan native with strong ties to the state’s Republicans, said on Twitter after the initial deadlock, “We need to further investigate, and every legal vote needs to be counted to ensure the integrity of the election.” There were no indications that any of the issues in Wayne County were related to fraud.

The Republican moves in Michigan came on the same day that Mr. Trump ousted the chief of the Department of Homeland Security’s Cybersecurity and Infrastructure Security Agency, which is responsible for protecting the national voting infrastructure and has aggressively disputed the false claims by Mr. Trump and his supporters that election software improperly gave votes to Mr. Biden.

Though the night ended with a resolution, the fight at the Wayne County canvassing board pointed to how Mr. Trump’s supporters were focusing on even the minutiae of state certification processes that are usually shielded from the hardball tactics of national political campaigns. Mr. Biden won the heavily Democratic county by nearly 323,000 votes; he prevailed in Michigan by about 148,000 votes, or 50.5 percent to Mr. Trump’s 47.9 percent.

Michigan has 83 county canvassing boards, each of which was to certify its results by Tuesday. Next, the process moves to Michigan’s Board of State Canvassers, where the final results are to be finalized by a Nov. 23 deadline.

At issue in Wayne County were minor discrepancies in which the number of votes cast did not match the number of voters listed as having shown up to vote in various election precincts. This could have stemmed from scenarios like a voter leaving a long line, or an absentee ballot kicked out of a tabulator, among other possibilities. Most involved a handful of votes, and were the types of inconsistencies that are frequently found during canvassing processes without leading to deadlocks like the one that happened on Tuesday.

The secretary of state, Jocelyn Benson, a Democrat, said in a statement earlier on Tuesday that the Board of Elections would be ready to canvass and address the discrepancies in the Wayne County results if the state canvassing board requested it. That board is scheduled to meet at 1:30 p.m. Eastern on Wednesday.

“Michigan’s Bureau of Elections stands ready to fulfill its duty to complete the canvas for Wayne County, address any clerical errors and improve the quality of the canvass over all,” Ms. Benson said. “Importantly, this is not an indication that any votes were improperly cast or tabulated.”

A senior adviser to Mr. Biden, speaking on the condition of anonymity, dismissed the trouble at the canvassing board as one in a series of stunts by Mr. Trump and his allies to stave off the inevitable certification of a Biden victory at the Electoral College.

A senior adviser to Mr. Trump, Justin Clark, said the campaign had played no role at the canvassing board. “This wasn’t us,” he said.

As anxiety spread among Democrats across the country, Detroit officials expressed certainty that the board’s initial failure to certify would not stop the state from fully certifying all of its results before the Electoral College completes its nationwide vote in mid-December. And, they said, it would not lead to the disenfranchisement of Detroit voters or, for that matter, any significant shift in the presidential election results in Michigan.

Christopher Thomas, a senior adviser to the Detroit city clerk and a longtime expert in election administration, called the board’s failure to certify the results “a blip on the road.”

“This is not something that’s going to stop the Electoral College from meeting,” he said.

Before the board’s reversal, the state Democratic Party issued a blistering statement accusing the two Republicans of overt partisan politics, actions that were “not only shameful but a complete dereliction of duties.”

“This action does away with a long and proud history of Wayne County Board of Canvassers acting in a truly bipartisan fashion, protecting the sanctity of the vote and instilling confidence in Wayne County residents that their votes were indeed counted and counted correctly,” Lavora Barnes, the chair of the Michigan Democratic Party, said in a statement. “Which is exactly what happened this year.”

The Wayne canvassing board was not the last hurdle in the Michigan certification process. The Board of State Canvassers, which must deliver final state certification, consists of two Democrats, Jeannette Bradshaw and Julie Matuzak, and two Republicans, Norman D. Shinkle and Aaron Van Langevelde.

Mr. Shinkle’s wife, Mary Shinkle, filed an affidavit in support of a lawsuit the Trump campaign has brought in federal court lawsuit alleging voting irregularities in Wayne County. The affidavit claimed, among other things, that poll workers had been “extremely rude and aggressive” to her and other observers, that they had not allowed her to look over their shoulders as they processed ballots, and that envelopes and ballot stubs had not been securely stored. The judge in the state case had dismissed similar affidavits as based on “an incorrect interpretation of events.”

Tuesday’s drama stoked fears among Democrats that Mr. Trump was working to force Michigan and other critical states to miss their certification deadlines so that Republican-controlled legislatures could appoint their own slates of pro-Trump delegates to the Electoral College, regardless of popular vote victories for Mr. Biden — moves that Mr. Biden’s lawyers have dismissed as legally futile.

Mike Shirkey, the Republican majority leader in the Michigan State Senate, said in an interview on Tuesday with Bridge Michigan, a local news outlet, that the Legislature would not move to appoint its own slate of electors.

The state board is supposed to certify its results on Nov. 23, but Mr. Thomas, the adviser to the Detroit city clerk, said that the state would have until mid-December to submit its tallies to the Electoral College, which he said was plenty of time, even if the state board deadlocks, which would force the fight into the courts.

“When they deadlock, the court generally tells them, ‘Your job is ministerial,’ which means you count the votes,” he said, “and you publish the certified results.”

Brexit: UK economy ‘should come back’ following exit says expert But the European Commission admitted today the Prime Minister’s initial moves have not yet triggered any concerns over breaches of the level playing field. Mr Johnson has ordered ministers to explore ways to strip back rules and regulations to help businesses start generating more revenue. […]

The former special counsel, Robert S. Mueller III, rebutted allegations on Tuesday from one of the top prosecutors in his office that his team could have more aggressively scrutinized President Trump’s ties to Russia and could have called out his efforts to obstruct the investigation. The former top prosecutor, Andrew Weissmann, said in a new […]