The Met Office has issued a yellow weather warning for Tuesday and Wednesday. The warning of heavy rain covers areas in Scotland where rainfall could reach 150-200mm in a few locations.

The Met Office said: “Rain will persist throughout Tuesday and into Wednesday, turning heavy at times, with heaviest rainfall over high ground.

“By Wednesday afternoon 50-100 mm of rain will fall widely with 150-200 mm possible in a few locations over high ground.”

Met Office meteorologist, Tom Morgan, said: “It’s going to be a bit of a rollercoaster [this] week with a spell of unsettled weather on the way.

“It will be fairly mild on Monday to Wednesday, especially in the southern regions, and will be a lot brighter and drier than what we’ve seen across the weekend, though rain will still come and go. 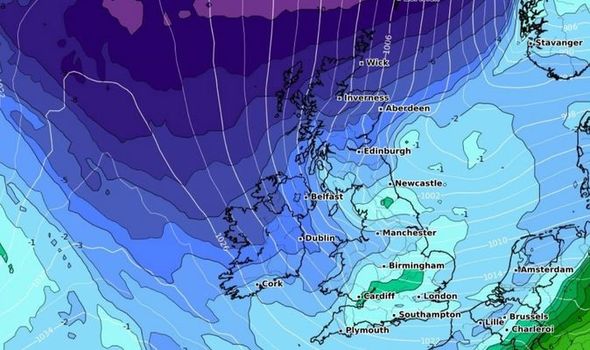 “It’s a different story for the rest of the UK, which will be considerably colder and wetter, with up to 150mm of rainfall expected in mountainous regions of Northern Ireland, Scotland and northern England.”

Snow showers are forecast to sweep in from as early as Thursday morning due to a brisk cold air.

But before temperatures plummet, Tuesday is set to start off as a fairly mild day with blustery winds.

Temperatures will reach 14-15C is most places and could jump up to 17C in the south west of the country. 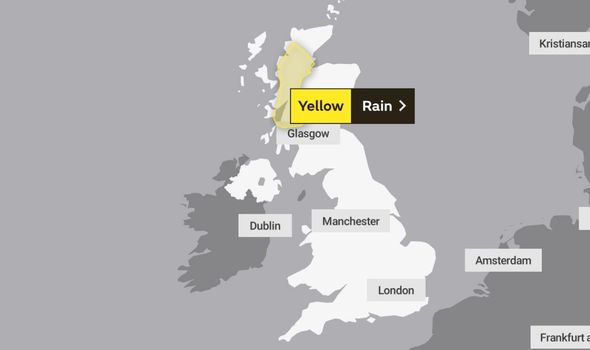 Alex Deakin, Met Office Meteorologist, said: “Temperatures are going to be up and down this week. It is going to be very mild on Tuesday.”

He added: “As well as being mild for some, it’s going to be very soggy through Tuesday and Wednesday.

“We’re particularly concerned about western Scotland where the rain will be heavy and could cause some problems.”

The Met Office have said that some transport services will be affected “with journey times taking longer”. 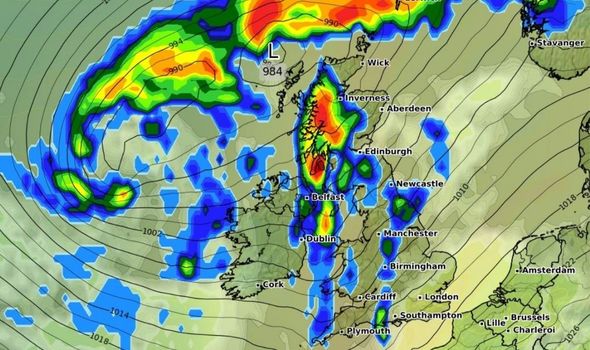 It added: “There is a small chance that some communities become cut off by flooded roads.”

The change in weather is thanks to “vigorous” low pressure which will sweep in midway through the week. 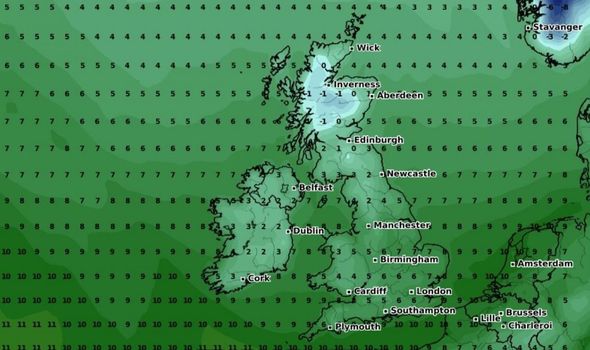 “The cold front sweeps over Britain on Wednesday, and through Wednesday night a raging northerly takes hold briefly for northern Britain, Northern Ireland and will bring snow showers for Thursday morning with a wintry start the day. Much different from Tuesday’s warmth.”

The cold front will bring much cooler conditions on Wednesday followed by a blast of even colder air will hit the UK.

Mr Deakin said: “Much, much colder air coming right down from the north streams in accompanied by some gusty winds to start with on Thursday.

“That’s going to be a bit of a shock to the system and it will feel so much colder with those brisk and chilly winds.”

Widespread frost across the UK is forecast for Thursday as the country braces for a wintry end to the week.

Trump tells evangelical rally he will put prayer in schools

By Jeff Mason and Heather Timmons MIAMI/WASHINGTON (Reuters) – U.S. President Donald Trump on Friday said his Democratic opponents would tear down crosses and pledged to bring prayer to public schools at a re-election rally to shore up evangelical support. Trump spoke on the outskirts of Miami at the King Jesus International Ministry, a “prosperity […]

LONDON (Reuters) – A whopping $20 billion has left global equity funds, BofA said on Friday, as investors fled risky assets on concerns the fast-spreading coronavirus could trigger a global recession. A sudden jump in coronavirus cases outside China this week raised pandemic fears that led to panic-selling across global stock markets. Global equities, which […]

We will use your email address only for sending you newsletters. Please see our Privacy Notice for details of your data protection rights. Cyclone Amphan has become the first super cyclonic storm in the Bay of Bengal since 1999. The system in 1999 killed more than 9,000 people after it hit the Orissa coast. Cyclone […]

U.S. envoy plays down expectations for North Korea meet, but ready to talk