For months, scientists and public health experts have been saying the most crucial part of defusing the Covid-19 pandemic will be developing a safe and effective vaccine. So it was cause for celebration this week when Pfizer announced that an early analysis showed its vaccine candidate was more than 90 percent effective.

Now the drug maker, the government and the public health community face a new challenge: quickly making millions of doses of the vaccine and getting them to the hospitals, clinics and pharmacies where they will be injected, two separate times, into people’s arms.

If Pfizer receives authorization for its vaccine from the Food and Drug Administration in the coming weeks, as expected, the company in theory could vaccinate millions of Americans by the end of the year, taking advantage of months of planning and decades of experience.

“I am very confident. I live and breathe this,” Tanya Alcorn, a Pfizer executive overseeing the supply chain for the vaccine, said in an interview on Wednesday. “We have developed a system that does not waste any precious vaccine.”

But Pfizer — like other manufacturers that may soon be authorized to roll out their vaccines — does not fully control its own destiny. The effort will hinge on collaboration among a network of companies, federal and state agencies, and on-the-ground health workers in the midst of a pandemic that is spreading faster than ever through the United States.

Before Pfizer can begin shipping its vaccine, federal and state governments must tell it where to send how many doses. McKesson, a major medical supplier, will have to provide hospitals and other distribution sites with the syringes, needles and other supplies necessary to administer the vaccine.

Employees at those locations will need to be trained to store and administer the vaccine. They will also have to ensure that, four weeks after people get the vaccine, they return for a second dose. And millions of Americans must be persuaded to get the shots in the first place. 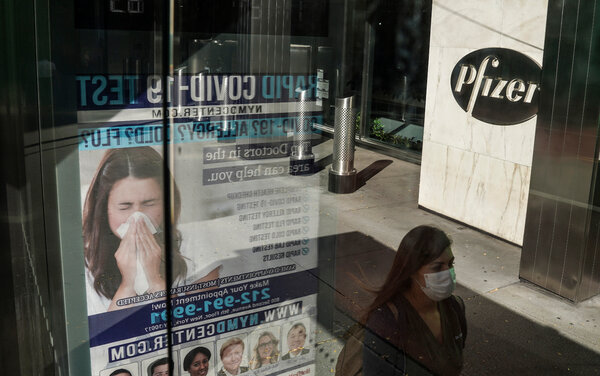 “We have a lot of confusion at the state and the local health departments level, and a lot of concern about the nitty-gritty of deployment,” said Dr. Saad B. Omer, the director of the Yale Institute for Global Health. “Which places, where to vaccinate, how to get the vaccine there, how to identify people in various risk groups, how to document, how to call back people for the second dose.”

Even in normal times, mass-vaccination campaigns involve many moving parts within a vast network of suppliers, transporters and middlemen.

The particulars of Pfizer’s vaccine will make this effort even more complex. The vaccine, developed with the German company BioNTech, has to be stored at around minus 70 degrees Celsius (minus 94 Fahrenheit) until shortly before it is injected. That is about the temperature of the South Pole on a winter day and colder than any of the other leading vaccines in development.

Pending results from other front-runners in the vaccine race could change the stakes. Moderna Therapeutics said on Wednesday that it had seen enough Covid-19 cases in its late-stage study to do an early analysis of its vaccine, which uses the same “messenger RNA” technology that Pfizer’s does. The technology has never produced an approved vaccine.

Nine other candidates are also in the final stage of testing. If any of those win approval from the F.D.A., that will reduce the importance of Pfizer’s vaccine but also introduce new questions, such as which hospitals and people get the different vaccines.

For now, though, Pfizer is in the spotlight.

If an analysis planned for next week confirms the vaccine’s safety, the company is likely to ask the F.D.A. this month for emergency authorization to distribute its vaccine. In that case, limited doses will most likely be shipped to large hospitals and pharmacies to be provided to health care workers and other vulnerable groups.

But the specifics of how that will work are hazy at best.

Pfizer does not yet know where the government wants the vaccine sent or who will be first in line to receive it, said Ms. Alcorn, the supply-chain executive.

“We’re working very closely, in the U.S., in particular, with Operation Warp Speed to identify those distribution points,” Ms. Alcorn said, referring to the federal initiative to produce and distribute Covid-19 vaccines. “We don’t have them today.”

Pfizer is making the vaccine at facilities in Kalamazoo, Mich., and Puurs, Belgium. The doses distributed in the United States will mostly come from Kalamazoo.

In Kalamazoo, vaccines will go into vials (five doses per vial). Vials will go into trays (195 vials per tray). Trays will go into specially designed cooler-type boxes (up to five trays per box). Pfizer plans to have about 100,000 of the coolers by the end of this month and more than double that total by March.

The reusable boxes, each toting between 1,000 and 5,000 doses and stuffed with dry ice, are equipped with GPS-enabled sensors. Pfizer employees will be able to monitor the boxes’ locations and temperatures as FedEx and UPS transport them to hospitals and clinics nationwide.

The boxes “will have eyes on them at all times,” Ms. Alcorn said.

Representatives of UPS and FedEx said they had been planning to play a major role in distributing vaccines and were ready to go.

Once the Pfizer coolers reach their destinations, hospitals or pharmacies will have a few choices of how to store the vaccine. The easiest option is using ultracold freezers, but not many sites have them. Otherwise, the facilities can stash the trays in conventional freezers for up to five days. Or they can keep the vials in the cooler for up to 15 days, so long as they replenish the dry ice and don’t open it more than twice a day.

Then there is the thorny question of who will receive vaccines first. That will be up to state governments.

Pfizer has said it expects to be able to produce 50 million doses this year. The chief executives of Pfizer and BioNTech have suggested that half of those may go to the United States. Since each person needs two doses, about 12.5 million Americans could be vaccinated.

“If you’re talking about 12.5 million people, you’re going to have to make some very tough-minded decisions about who this goes to,” said J. Stephen Morrison, senior vice president at the Center for Strategic and International Studies, a research firm. “It’s a pretty small number of doses that are going to be distributed.”

One of the biggest early challenges may be distributing the vaccine in rural areas, which may not be able to administer doses quickly enough before they go bad. It isn’t clear how states with large rural populations are going to deal with this.

Industry executives acknowledge another potential hurdle: Will Americans resist the vaccine? The country has long had a noisy minority of people who oppose vaccinations. Safety concerns are only likely to be heightened by the speed with which the coronavirus vaccines have been produced.

“The challenge, of course, that’s out there is: Are people going to go get vaccinated?” Ms. Alcorn said. “It would be a shame that we did all this work, and then we don’t have the public trusting that there’s a safe vaccine.”

For all the difficulties of making and distributing the vaccine, public health experts said the hardest part of the process could soon be complete. Having devised and tested an apparently effective vaccine, figuring out the logistics is more about applying existing know-how, said Dr. Omer of the Yale Institute for Global Health.

“The good news,” he said, “is that these are not insurmountable problems.”

Photo: Tom Williams / Getty Images The House passed Democrats' revised $2.2 trillion coronavirus relief bill 214-207 on Thursday as 11th-hour negotiations between leaders for a bipartisan deal are gaining momentum. Why it matters: The legislation, a slimmed down version of the House's initial $3.4 trillion HEROES Act, is Democrats' last ditch effort to strike […]

WASHINGTON (Reuters) – The Executive Board of the International Monetary Fund has agreed to raise the medium-term target for the fund’s precautionary reserves given a sharp increase in financial risks since 2018, the IMF said on Friday.FILE PHOTO: The International Monetary Fund (IMF) headquarters building is seen in Washington, U.S., April 8, 2019. REUTERS/Yuri Gripas/File […]

Facebook’s online shopping push may have started with its own network, Instagram and Messenger, but now it’s spreading to the company’s popular app, WhatsApp. On Thursday, the company revealed several changes to the messaging platform, including bringing in-app shopping and transactions to chats in the app, a new Facebook Hosting Services offering that can corral […]