WASHINGTON — President-elect Joseph R. Biden Jr.’s transition team is preparing multiple sets of policy proposals for the economy, health care, climate change and other domestic issues, including the ambitious agenda Mr. Biden laid out in his winning campaign, while acknowledging it may have to be pared back in recognition of divided government.

Where the incoming administration lands depends heavily on two Senate runoffs in Georgia in early January.

If Democrats win both races, close aides to Mr. Biden and economists who helped advise his campaign say the president-elect will try to push through a large stimulus plan for the flagging economic recovery — most likely along the lines of the $2.2 trillion that House Democrats approved this fall. His stimulus plan under such a scenario would include hundreds of billions of dollars for state and local governments that have lost tax revenue amid the pandemic recession, extended unemployment benefits for people who lost jobs during the crisis and a new round of aid for small businesses.

His team is also developing a government employment program — called the Public Health Jobs Corps — that would put 100,000 Americans to work on virus testing and contact tracing.

A narrow majority in the Senate would also give Mr. Biden the chance to push through his proposed tax increases on corporations and the rich — tax hikes that would be used to fund the president-elect’s more ambitious plans like rebuilding roads and bridges, speeding the transition to a carbon-free energy sector and helping Americans afford health care.

But if Republicans win even one of the Georgia seats, Mr. Biden will most likely need to settle for a wave of executive actions that would bring more incremental progress toward his policy goals, while trying to cut compromise deals with Senator Mitch McConnell of Kentucky, the majority leader.

Tax increases, even for the ultrarich, would almost certainly be off the table, as would be expanding the Affordable Care Act to give Americans the ability to buy into a government insurance program like Medicare. Mr. Biden would continue to push for infrastructure and health care bills, economists around him say, but he would be unlikely to win support for his full agenda in those areas.

In order to extend as much economic aid to people, businesses and state and local governments as his team believes is necessary to sustain the recovery, Mr. Biden could be forced into a creative reshuffling of unspent money from the previously approved stimulus package — the sort of move that Democrats criticized when President Trump acted this year to repurpose federal disaster funding for a supplemental unemployment benefit.

Mr. Biden’s aides say his transition team is working on a variety of contingency plans depending on economic conditions, including whether the recent surge of virus cases chills consumer spending, and on party control of the Senate. The team is also moving ahead with finalists for appointments to key cabinet positions and other posts, many of which will be announced before the Georgia runoff.

“President-elect Biden’s transition team is filled with experts who are, at this very moment, engaged in the work of fleshing out the Biden-Harris campaign policy proposals into actionable executive actions and legislative proposals,” said Stef Feldman, Mr. Biden’s campaign policy director. “The Biden-Harris administration will be prepared to act on Day 1 in all scenarios, including the different possible outcomes of the Georgia runoffs.”

The races will be competitive and expensive, reflecting Georgia’s newfound status as a battleground state and the high stakes of the outcome. The presidential race there is still undecided, with Mr. Biden currently leading Mr. Trump by just over 14,000 votes in the state, which has voted Republican in every presidential election since 1992. On Wednesday, Georgia’s Republican secretary of state authorized a hand recount of the election — a move championed by Mr. Trump but one officials have said is unlikely to erase Mr. Biden’s narrow lead.

“A Democratic majority in the U.S. Senate would be the biggest difference maker to help President-elect Biden deliver for working families across the country,” said Senator Chuck Schumer of New York, the Democratic leader.

Such a majority would give Democrats the ability to pass certain legislation without running the risk of a Republican filibuster by employing the same parliamentary maneuver that Mr. Trump and his party used to pass sweeping tax cuts in 2017 without a single Democratic vote. It would almost certainly be the vehicle for Mr. Biden to achieve most of his ambitions in areas like infrastructure, education and climate change. And it would allow him to raise taxes on companies and the rich, which Republicans would otherwise almost certainly block. 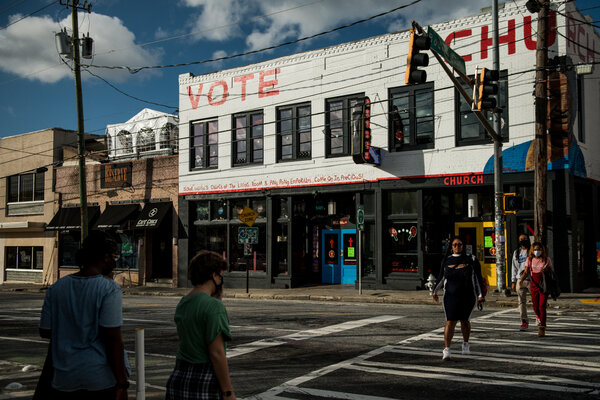 “It seems like it’s everything,” said Heidi Shierholz, a former Labor Department economist under President Barack Obama who is the policy director at the liberal Economic Policy Institute in Washington. “If it’s 50-50 in the Senate after the Georgia races, then the Democrats will be able to push something substantial through that will be a really key thing for boosting the economy. If not, it just doesn’t seem possible.”

While Mr. Biden’s campaign platform was less expensive and expansive than his Democratic primary race rivals’, it featured more new government spending and targeted tax increases — in dollar terms — than any Democratic nominee before him.

Much of his campaign’s domestic policy agenda would require acts of Congress, including many of the economic policies that Mr. Biden’s transition team has highlighted in recent days.

That list starts with a stimulus proposal that hews closely to the multitrillion-dollar package that House Democrats approved this fall, though they could not reach an agreement with Trump administration officials and Mr. McConnell in order to pass the bill into law.

Mr. Biden’s bigger-picture agenda also calls for new legislation. He wants to pass an infrastructure bill that includes expanding broadband internet to rural areas and increasing federal spending on clean energy research. He would fund universal prekindergarten, enhanced Social Security benefits and expanded tax credits for health insurance coverage. He would raise the federal minimum wage to $15 an hour from $7.25 and make it easier for workers to form a labor union.

To offset that new spending, Mr. Biden would seek congressional approval to raise taxes on businesses, particularly multinational corporations, and individuals earning more than $400,000 a year.

Slivers of that agenda would remain possible for Mr. Biden without Senate control. Business groups remain hopeful that he and Mr. McConnell could reach agreement on a slimmed-down stimulus bill and a compromise infrastructure package, perhaps in the form of a new highway bill.

Mr. Biden could also push executive actions to reshape trade, financial regulation and energy policy, among others. His Treasury Department could use its regulatory authority to nibble at the edges of tax policy, including shifting enforcement efforts to focus more on high earners and companies that dodge tax liability, said Kimberly Clausing, an economist at Reed College in Oregon who provided tax policy advice to Mr. Biden’s campaign.

Mr. Biden’s campaign platform included a wide range of potential executive actions, such as placing new requirements on firms bidding for federal contracts to promote higher pay and racial equality. It also included a plan to direct $400 billion of federal procurement to products made in the United States and to impose strict new fuel economy standards to combat climate change. Transition advisers are also exploring how Mr. Biden might repurpose previously allocated, but unspent, stimulus funds to help people and businesses.

Liberal economists and many progressive activists fear that scenario would expose the economy to the risk of a sluggish recovery early in Mr. Biden’s term.

“Just being totally realistic and honest, it’s huge” for the fate of Mr. Biden’s agenda, said Michael Linden, the executive director of the Groundwork Collaborative, which promotes progressive policies. “That doesn’t mean that if Democrats win the Senate, they get all their wildest dreams. It does mean that instead of having to give everything they need to Mitch McConnell to get him to think about doing something, you could actually get some things passed to improve people’s lives.”

But business groups and many consultants in Washington are welcoming the possibility of a divided government with little threat of corporate tax increases.

“We have to lower the ceiling of expectations in that scenario” for Mr. Biden’s agenda, said John Gimigliano, a former Republican tax policy staff member in the House who is now at KPMG in Washington. “We’re looking at more modest, more bipartisan stuff. And to be honest, maybe that’s not the worst thing.”

Wall Street Week Ahead: Investors look beyond drug makers as hunt for Covid-19 treatment heats up

NEW YORK (Reuters) – Investors are diversifying bets in the healthcare sector, as the rush to develop treatments for Covid-19 has driven up prices for some pharmaceutical stocks. A record 48% of fund managers are overweight healthcare stocks, a BofA survey showed, and the S&P 500 healthcare sector is up nearly 34% since its March […]

Europe must be ready for fiscal stimulus over virus: French minister

What else can be said about independence?

This is another News Portal > Politics > What else can be said about independence?