The pandemic has turbocharged profits at some big businesses, like Amazon, which reported a 70 percent increase in earnings in the first nine months of the year. But it has devastated others, like Delta Air Lines, which lost $5.4 billion in just the third quarter.

Perhaps most surprising: Some companies that had feared for their lives in the spring, among them some rental car businesses, restaurant chains and financial firms, are now doing fine — or even excelling.

Wall Street analysts expect earnings to rebound to a record high next year. And, over all, 80 percent of companies in the S&P 500 stock index that have reported third-quarter earnings so far have exceeded analysts’ expectations, said Howard Silverblatt, senior index analyst for S&P Dow Jones Indices.

The strong are getting stronger.

As the pandemic forced people to stay home and do more things online, some successful companies were perfectly positioned to take advantage of the change. Now, these businesses are becoming even more dominant.

Consider Amazon. Its profits in the first nine months were up $5.8 billion from a year earlier. They allowed the company to spend 120 percent more during the period on things like warehouses, technology and other capital investments. That spending — $25.3 billion — could make it harder for all but Amazon’s biggest competitors to keep up with its growth.

Often in the past, companies that appeared strong during an expansion struggled in the next recession, delaying a full recovery. For example, banks grew with abandon before the 2008 financial crisis but later became a drag on the economy as they repaired their balance sheets.

Tech companies were strong before the pandemic downturn — and have powered through the rout, which could help the economy recover faster this time, said Jonathan Golub, chief U.S. equity strategist at Credit Suisse Securities. “It’s really quite breathtaking,” he said.

Some companies are doing better than expected.

When the pandemic hit, many executives understandably feared that their companies were facing an existential crisis or, at least, a very difficult recession. But a surprising number of such companies have excelled.

Mr. Cooper, a mortgage company, believed that it might face a financial squeeze in the spring when some homeowners were unable to make monthly payments. But a federal regulator provided relief to mortgage lenders, and then business was helped by a surge in refinancing. Mr. Cooper’s revenue in the first nine months of the year was up 40 percent, and its stock has climbed 341 percent from its low in April.

During recessions, consumers often decide to pull back and avoid large outlays. But this year, something different happened. Many Americans who did not lose jobs but were also not spending on travel and entertainment found themselves with more disposable income. The $1,200 stimulus payments from the government also helped.

This has been a boon for companies that initially feared a deep recession. General Motors and Ford Motor, for example, rushed to borrow billions of dollars early in the year, expecting that car sales would tumble and stay low for a while. The auto business did struggle and automakers had to close their factories for about two months, but sales started picking up this summer. For the third quarter, G.M., Ford and other automakers reported big profits.

Some large restaurant chains, after pressing for a federal bailout, have done much better than expected as drive-through customers, delivery and takeout orders bolstered sales. On Thursday, Papa John’s, whose stock is up 32 percent this year, reported surging sales, profits and cash flow and announced a new stock buyback program. Its chief executive, Rob Lynch, said the company had added “over eight million” customers this year.

Asked on a call with financial analysts Thursday if the company can hold on to such gains, Mr. Lynch said that many of the new customers were dining more frequently and that the average spending per order was larger than before the pandemic.

“So that gives us a lot of confidence that they have come in, they are enjoying their experience and they’re coming back,” Mr. Lynch said.

But there are winners and losers even within industries. Darden Restaurants, which owns Olive Garden and other brands that are more reliant on in-restaurant dining, reported a 28 percent decline in sales in the three months through the end of August. Its stock price is down 6 percent this year.

Darden is in a painful waiting game. For its results to recover, it needs big states to relax indoor dining restrictions.

“We need to get California back,” Gene Lee, Darden’s chief executive, said on a call with analysts. Olive Garden has 100 restaurants in the state, he said.

Businesses have adapted, successfully in some cases.

Even as much of the travel industry struggles, some companies have found a way to survive.

Hertz sought bankruptcy protection in May. And its biggest competitor, the Avis Budget Group, ran up large losses — $639 million in the first six months of the year. But Avis turned a modest $45 million profit in the third quarter.

The company’s comeback was made possible by cost cutting and a decision to sell 75,000 vehicles in the United States to take advantage of strong demand for used cars. (Nationally, spending on used light trucks, including sport utility vehicles, was up nearly 19 percent in the third quarter from a year earlier.)

Of course, that strategy might not keep working. Demand for rental cars is still low, and many Avis Budget locations are at airports, which are seeing precious little traffic. Other companies that have more urban and suburban locations, like Enterprise, are better positioned because they don’t depend as much on air travelers. 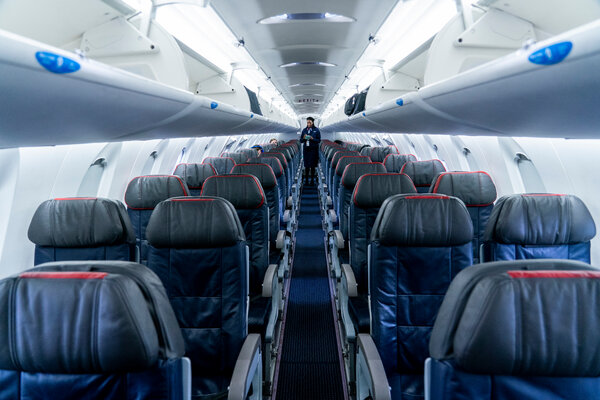 The outlook is dire for others.

Passenger airlines are among the biggest losers of the pandemic, and they have few options to improve their prospects. Delta, United Airlines and American Airlines worked quickly to cut costs and got $50 billion in the March federal stimulus package.

After suffering from a dizzying collapse in business in the spring, airlines pinned their hopes on the typically busy summer season, which brought some relief despite a surge in virus cases in July. But that did little to ease the pain. In the third quarter, American lost $2.4 billion and United lost $1.8 billion. For all three, revenue fell more than 70 percent from the same three months last year.

With coronavirus cases at record highs and domestic air travel still down 60 percent from last year, there’s little hope that the typically slower winter season will bring a meaningful rebound. The industry is hoping Congress will authorize another round of aid to help it pay thousands of workers.

But investors are not all that worried.

Investors, who are more likely to buy stocks if they believe companies will make more money, are signaling that they expect a broad profits recovery among the largest U.S. companies. The S&P 500 has soared nearly 57 percent from its March low and is up 8.6 percent for the year.

Those gains might seem odd given that the combined profits of the companies in that index are on track to decline 25 percent this year from a record showing in 2019. But a big chunk of that rally can be attributed to a handful of large technology stocks. Investors are also counting on the Federal Reserve to keep its benchmark interest rate low for years to come and to keep pumping money into the financial system.

Of course, many struggling businesses, including lots of restaurants, stores and services companies are not traded on the stock market. That means a surge in stock prices can give a misleadingly optimistic view of where the economy is headed.

“The economy is not as good as the market is,” said Mr. Golub of Credit Suisse.

WASHINGTON (Reuters) – Negotiators in the U.S. Senate reached agreement on Thursday on legislation increasing the amount of time, to 16 weeks from the current eight-week deadline, for small businesses to use Paycheck Protection Program loans, according a Senate aide. The legislation, which attempts to make revisions to a program created in late March to […]

(Reuters) – European stocks closed sharply lower on Thursday as Wall Street tumbled after another record surge in U.S. coronavirus cases that raised fears of fresh lockdowns. London stocks .FTSE were among the biggest casualties in Europe, sliding 1.7%, with energy firms BP (BP.L) and Royal Dutch Shell (RDSa.L) down about 4% as oil prices […]

FILE PHOTO: A Visa logo is seen during a news conference at the MAXXI National Museum in Rome, Italy May 17, 2016 REUTERS/Alessandro Bianchi(Reuters) – Visa Inc V.N reported a 23% drop in quarterly profit on Wednesday, as spending volumes at the payment processor sank due to the COVID-19 pandemic. Net income fell to $2.4 […]

Canada could get multiple coronavirus vaccines. Experts say there are unique challenges

France looking into setting up insurance cover for pandemics