Gail Collins: Bret, when Joe Biden finally got to give his postelection speech on Saturday night, he reached out to Trump voters who were disappointed about the results. Very typical for Biden, and given the fact that his opponent was sulking in silence — except for a few angry tweets — it did set a heck of a new tone.

Bret Stephens: Don’t tell anyone, Gail, but I was profoundly moved by his speech. Biden is so … normal. And I was also moved by the sight of the Biden and Harris families on the stage. It looked like the great American family, as opposed to the barbarian cyborgs of the opposing team.

Gail: The minute Biden’s win was projected, people poured onto the corner of Broadway near my apartment and started cheering and waving to the passing drivers, who kept honking their horns.

It reminded me of the films of Times Square when the end of World War II was announced. Was that the last time people were so happy about a public event?

You know, if somebody traveled back through time and showed videos of the postelection celebrations to Americans in, say, 2015, I doubt any of them would believe this wild euphoria was in honor of Good Old Joe.

Bret Stephens: The moment really requires a musical interlude. I’m thinking of the “Hallelujah” chorus from Handel’s “Messiah.” Trump lost! Our president-elect is a good and decent man through whom there courses the milk of human kindness! Our vice president-elect is an inspiration to my daughters! Our long national nightmare will soon be over.

OK, I’m still crossing my fingers on that last point. If Trump should try to further destroy the country in the 10 weeks that are left to his presidency — by continuing to refuse to concede, by endless legal challenges, by claiming he’s somehow been stabbed in the back politically — then I’d direct our readers to the mad scene from “Boris Godunov.”

Gail: Trump doesn’t rise to the level of an opera — maybe I could see him as a physically unfit version of “The Joker.” I can’t imagine him handling the transition with any grace. He’s been sending out emails to his supporters warning that “the Left” is trying “to STEAL this election” — and of course suggesting that the best way to thwart that is with a generous donation to his new legal defense fund.

Bret: All proceeds going to their intended purposes, no doubt.

Gail: I hope the more reasonable people around him will make sure he doesn’t totally screw up the process while he’s in a snit. 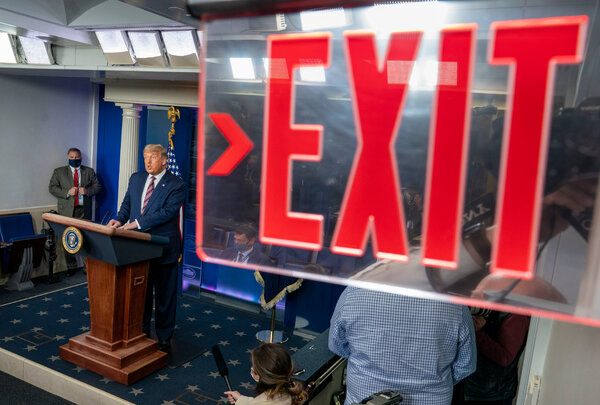 But as much as I just want to savor the moment, I do feel obliged to revert to cranky columnist and dwell on the downside of this election. Which would be that almost half of the American voting public thought another four years of Trump was a good idea.

Bret: As for the fact that it was far too close for comfort, that seems to me a story in four parts. First, Trump is a demagogue who, as our colleague Nick Fox put it to me the other day, makes people feel proud of things they had been made to feel ashamed of, even if they should have been ashamed.

Gail: From race-baiting and militia movements to denigrating low-income housing in the suburbs …

Bret: Among a hundred other examples. Second, too much of the Democratic Party has moved leftward in a way that turns off too many middle-of-the-road voters and not just a few Never-Trump columnists. Third, at least until the pandemic, a majority of Americans believed their economic fortunes really had improved over the last four years. And, finally, Biden isn’t the sort of candidate a voter can easily fall in love with, the way voters loved Barack Obama or Bill Clinton. He’s about as inspiring as chamomile tea.

It just happens that chamomile is exactly what the country requires right now.

Gail: Yeah, I guess you’d have to go back to the Bushes to find the last chamomile era.

Gail: Take your pick. No need to add honey.

You know, we’re always dividing the electorate up by gender or income or level of education, but one thing that’s always struck me is the empty-to-crowded continuum. Tell me how many voters per acre and I’ll tell you which party is going to be dominant.

Bret: Very true, save for occasional exceptions in Montana.

Gail: If you look at political divisions that way, they seem more reasonable — less selfish and arbitrary. If you live in an urban area, you’re continually reminded of how much we need government to keep order and provide services. If you’re rural, everything seems to be put on your own back, and government spending just seems intrusive.

Bret: It’s a bit strange when you think of it, at least from an economic point of view. Think of how much farmers depend on government subsidies. On the flip side, think of the substandard levels of government services in a lot of big cities. People are always more complicated and contradictory than any one data point about them suggests.

Gail: Certainly true, as we have been reminded every single day lately.

Bret: Speaking of data, Gail, one interesting thing about this election is how badly most of the pollsters seem to have muffed their electoral predictions. Just take a look at the FiveThirtyEight election eve polls. In Ohio, they gave Trump an edge of 0.8 percentage points. He won by 8 points. In Florida, the FiveThirtyEight forecast had Biden beating Trump by 2.5 percentage points. Trump ended up with a 3 point lead. In Wisconsin, they gave Biden an 8.4 point lead. Biden won it by less than a point.

Should this be the end of the polling as we’ve known it?

Gail: I was always in awe of the polling people just because they had to walk that tightrope of expectations. One bad prediction and you’re in free-fall.

Bret: In this case, it’s been two massive failures in consecutive presidential elections. The failure will be partially obscured by Biden’s ultimate victory, but there ought to be some accountability for the industry.

Gail: It’s become very, very clear that getting accurate predictions is next to impossible when the subject is Donald Trump. And I’m not sure what will happen after he’s actually gone (please, God). Maybe people will go back to giving more reliable responses to the surveyors. Or maybe the science just doesn’t work well in our new digital universe.

Bret: We definitely learned that the phenomenon of the shy Trump voter didn’t end when he became president. We also learned that people don’t necessarily vote the way they are often typecast by parts of the media. Exit polls showed Trump doubled his support among L.G.B.T.Q. voters. His share of the Hispanic vote also went up steeply, and he also did better with Black voters this time around. Another reminder that people are just … complicated.

Gail: Before we go, tell me — any big surprises for you in the Senate races?

Bret: The biggest surprise for me was in Maine, with Susan Collins’s thumping win over Sara Gideon. (Not to belabor a theme here, Gail, but FiveThirtyEight gave Gideon a 59 percent chance of winning.) On the other hand, I predicted Joni Ernst’s win in Iowa, Thom Tillis’s in North Carolina and Lindsey Graham’s in South Carolina. The big question for everyone is whether Republicans David Perdue and Kelly Loeffler manage to hold on to their seats in Georgia, which will determine control of the Senate.

Gail: And we won’t know about the Georgia races until January. But however it turns out, I suspect that over the next two years much of the rancor I formerly invested in Trump will be redirected at Mitch McConnell.

Bret: I suspect so, too! The other surprise was the Republican pickup of seats in the House, which I don’t think anyone saw coming. Is it maybe time for Nancy Pelosi to hand the reins of the chamber to somebody else?

Gail: History — or at least the part written by Democrats — is going to record Pelosi as one of the great heroes of her era. She dragged Obamacare through a Congress that looked more like an alligator herd than a legislature. She’s managed to keep a caucus of ambitious, testy, self-regarding politicians together through the Trump years. I truly don’t think anyone could have done it better.

Bret: Putting my policy differences with Pelosi aside, I agree.

Gail: She wants to stay on, and given her drive, I don’t necessarily regard her being 80 as a handicap. But when coupled with a 78-year-old Democratic president, that’s — a heck of a lot of age.

Gail: The House Republicans have always been better at giving their younger members a chance to shine. So yeah, I think the majority leadership should be devoting a lot of effort to preparing the next generation. But I can’t say it’d be on my list of top things to do this week.

What about on your side? Do you want to see McConnell stay on as the Senate’s top dog?

Bret: McConnell certainly knows how to play the legislative game as well as anyone. And he demolished his opponent in his own Senate race. But if he winds up remaining majority leader in the next Congress, he’s about as appealing a figurehead for the G.O.P. as Marvin the Martian of Looney Tunes fame was a figurehead for Martians. Time for something else.

Gail: Agreed, but until then Mitch is going to be Marvin the Martian to me.

Want to get The Morning by email? Here’s the sign-up. Good morning. We’re looking back on the stories that drew the most readers this year. What were the most-read stories in The New York Times this year? You may not be surprised to learn that two topics — the election and the pandemic — dominate […]