A peer says he has “withdrawn” his reference to vice-president elect Kamala Harris as “the Indian” on Twitter.

Lord Kilclooney was accused of racism after posting the message, while he has been reported to the Commissioner for Standards and the Lords Speaker.

The cross-bench peer earlier insisted there was “nothing racist” in his tweet, which read: “What happens if Biden moves on and the Indian becomes President. Who then becomes Vice President?” 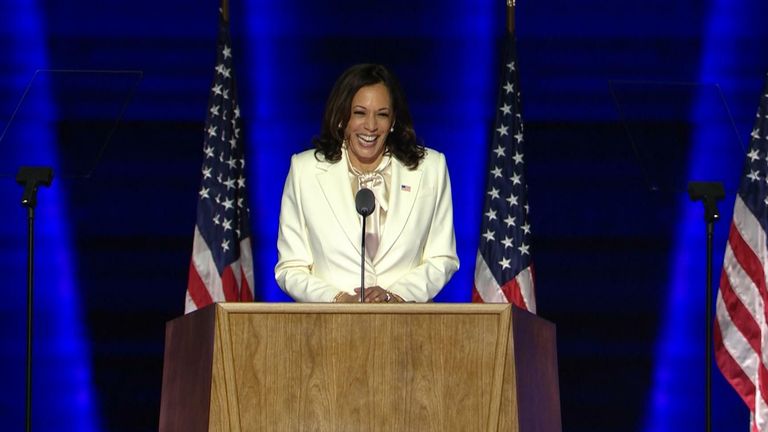 His remark sparked a furious backlash, with politicians and campaigners calling on him to delete the post and apologise.

In a message on Monday afternoon, Lord Kilclooney said he had “withdrawn” the remark because “it seems to have upset some people”.

He added: “I did not know her name and identified her with the term Indian. Most people understood. Racist NO.”

However, despite saying he had “withdrawn” the reference, the original tweet remains on his timeline.

It follows the election of Ms Harris, the first black and Asian-American person to take up the post of American vice-president alongside her Democratic colleague Joe Biden.

Baroness Angela Smith, the Labour leader of the House of Lords, said she would report the comments to the parliamentary authorities.

She said: “I am so angry about this comment. It is despicable and beneath contempt, and totally unacceptable from anyone – but especially from someone in Parliament.

“I will be making an official complaint to both the Commissioner for Standards and the Lords Speaker.”

Lord Speaker Lord Fowler said the peer should retract his comments and apologise.

“This is an offensive way to refer to anyone, let alone a woman who has just made history,” he said in a tweet.

“The comment is entirely unacceptable and has no place in British politics. I could not be clearer.”

Lord Kilclooney denied that his message was racist.

He told the Press Association: “The first thing is to get it in perspective, the criticism is minor, the support is massive – I’ve never had so many Twitter followers in one day, ever.

“I’m very fond of India myself, I’m a member of the British India all-party group, I have two Indians (tenants) in my flats here in London and there’s nothing racist in it whatsoever.

It is not the first time Lord Kilclooney, a cross-bench peer, has been accused of racism, after he previously described then-Irish prime minister Leo Varadkar as “a typical Indian”.

He justified his previous tweet about Mr Varadkar by saying “I didn’t know his name at the time” but, asked if he will delete his latest message now he knows Ms Harris’s name, he said: “No, not indeed. Because she’s proud of her Indian background.”

The 82-year-old peer, who is no longer a member of the Ulster Unionist Party, said that he did not try to find out her name online before writing the tweet.

Asked why he did not use a search engine before sending the message, he replied: “That’s not your concern.”

Martin Lewis provides advice on self-employed income support When you subscribe we will use the information you provide to send you these newsletters.Sometimes they’ll include recommendations for other related newsletters or services we offer.Our Privacy Notice explains more about how we use your data, and your rights.You can unsubscribe at any time. Former work and […]

Tom Tugendhat eliminated from Tory leadership race We use your sign-up to provide content in ways you’ve consented to and to improve our understanding of you. This may include adverts from us and 3rd parties based on our understanding. You can unsubscribe at any time. More info The third round saw the last Remainer Tom […]

Blue wall mapped: Where is the blue wall? How many councils do Tories control now?

Local elections not 'too shabby’ for PM says Kuenssberg We use your sign-up to provide content in ways you’ve consented to and to improve our understanding of you. This may include adverts from us and 3rd parties based on our understanding. You can unsubscribe at any time. More info On Thursday, Britons across England, Scotland […]

Belarus opposition urges EU not to recognise election ahead of summit