Early voting has soared in Wisconsin, as have coronavirus cases, moving most campaigning online. But volunteers are working hard to reach the dwindling number of voters who have yet to cast ballots. 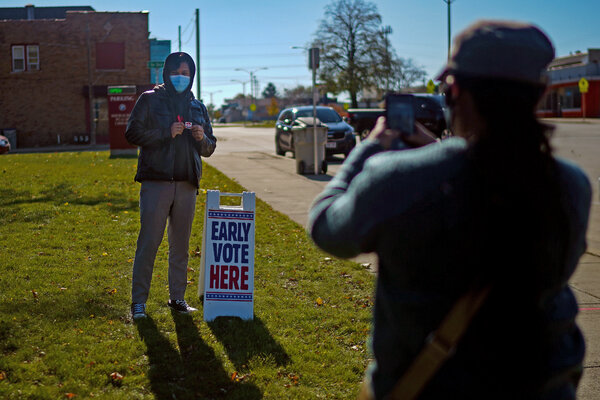 MILWAUKEE — As Wisconsin weathers the worst coronavirus outbreak of any presidential battleground, the state Democratic Party is calling and texting voters instead of going door to door. The Biden campaign’s get-out-the-vote effort in the state is all virtual.

Stepping into the void to make face-to-face contact with voters are people like Rita Saavedra, who is taking Election Day off from her job as a community relations officer for a local health insurance company so she can drive friends and family members to their polling sites.

“I’m reaching out to everybody I know, all the people who haven’t voted yet,” she said. “I’ll even go to the house and get them out of bed.”

With early voting over and no time left for a mailed ballot to arrive by the Election Day deadline in Wisconsin, the typically herculean task of reminding voters in person to get to the polls and, in many cases, transporting them there, is being left to an informal group of volunteers like Ms. Saavedra, 43. This is happening as the entire infrastructure of the state Democratic Party and Joseph R. Biden Jr.’s campaign is focused on calling and texting the small universe of would-be supporters who still haven’t voted.

The total push toward official online campaigning comes as Wisconsin is experiencing a coronavirus spike unlike any other swing state. The state’s daily average case count was the third-highest in the country per capita over the past week. Only one other presidential battleground, Iowa, is in the top 12.

Absentee turnout in Wisconsin so far amounts to a full 84 percent of the state’s 2016 electorate. But there are still people in vote-rich urban and suburban areas who have yet to cast ballots.

“It is very weird how we’re going to inevitably have the most volunteers on Election Day, but that gigantic number of volunteers is going to be working to turn out a much smaller number of votes,” said Ben Wikler, the chairman of the Wisconsin Democrats. “There’s a kind of extra return on yard signs and chalk murals and holding a sign near a grocery store and all the things that human beings can do using atoms instead of electrons.”

There is ample evidence that Democratic turnout in Wisconsin is skyrocketing.

Five counties near Milwaukee, where enthusiasm lagged for Hillary Clinton, have exceeded their 2016 turnout, according to Wisconsin Election Commission data released on Sunday. Dane County, the state’s most Democratic county and home to Madison, is within about 1,000 votes of doing so as well.

In Milwaukee County, 93 percent of the 2016 electorate has already voted, though the numbers are higher in the suburbs than in the far-more-Democratic city of Milwaukee.

At the same time, the state’s 24 counties with the lowest pre-Election Day turnout relative to 2016 are all rural enclaves that voted for President Trump four years ago.

William Clay ousted in Missouri primary after 20 years in Congress

Cori Bush, a onetime homeless woman who led protests following a white police officer’s fatal shooting of a Black 18-year-old in Ferguson, ousted longtime Rep. William Lacy Clay Tuesday in Missouri’s Democratic primary, ending a political dynasty that has spanned more than a half-century. Bush’s victory came in a rematch of 2018, when she failed […]

Michael Gove fails to confirm when UK lockdown will end The former Education Secretary told the BBC’s Today Programme that the UK Government will be putting in place alternative measures to GCSE and A-Level exams. Michael Gove admitted that these measures will effect his own children who were due to sit the examinations this year.  Mr […]

Covid 19 coronavirus: The roll of the dice and a close encounter with lockdown

ANALYSIS Every time there is a new outbreak, there’s a roll of the dice. That’s because Covid-19 is so random in who it infects and how easily. The latest episode of our ongoing battle with the virus stars an extremely unfortunate Defence Force serviceman, who passed it to an Auckland student he doesn’t know and […]