FRANKFURT — On paper the European economy is snapping back smartly from the pandemic, growing more in the third quarter than it ever had. But images from Paris, Madrid and Frankfurt tell a different story. Cafes are rolling up their awnings, theaters are canceling performances, and it’s starting to look like March again on city streets.

The risk of another severe downturn in Europe is rising as new lockdowns take effect in countries like Germany, France and Belgium, where the authorities are desperate to prevent a surge in coronavirus infections from overwhelming hospitals.

Instead of returning to a semblance of normalcy, governments in the European Union, America’s largest trading partner, are straining to find ways to support furloughed and unemployed workers, and to keep restaurants and other businesses from going bankrupt.

This week, in an extraordinary move, the European Central Bank all but promised to unleash new relief measures by December at the latest. Warning that risks are “clearly tilted to the downside,” Christine Lagarde, the central bank’s president, indicated that its Governing Council is just trying to decide what cocktail of lending measures, bond market intervention or rate cuts would best stimulate the eurozone economy.

Even Ms. Lagarde, who probably has access to more detailed information about the eurozone economy than anyone on the planet, was unsure whether the region was headed for another big dip or moderately slower growth.

The gloomy and uncertain outlook overshadowed Friday’s news of a record 12.7 percent quarterly increase in gross domestic product from the previous quarter in the 19 countries that use the euro. That rebound exceeded economists’ expectations but still left output 4.3 percent lower than it was a year earlier — a severe recession by any standard. 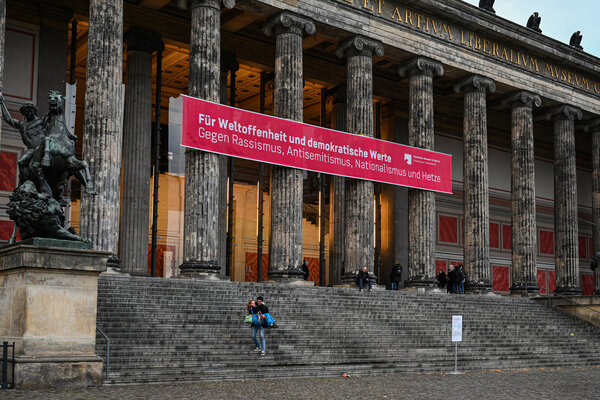 What is developing looks more saw-toothed, a jagged series of economic ups and downs coinciding with waves of infection and renewed lockdowns.

“We are completely reliant on the development of the virus,” said Sylvain Broyer, chief economist at S&P Global Ratings in Europe.

The volatile growth pattern repeated itself at the national level. Germany recorded an 8.2 percent increase in G.D.P. in the third quarter compared with the previous quarter, but business surveys indicate that the pace is likely to slow markedly in months to come.

France grew more than 18 percent in the quarter, according to official data published Friday. But Bruno Le Maire, the French finance minister, said a tough fourth quarter would cause the economy to shrink by 11 percent for the full year.

The economic cost is particularly high in industries that depend on person-to-person contact. The longer the pandemic lasts, the greater the risk of mass bankruptcies among service businesses like hotels, fitness studios and nail salons. In Paris, the hotel occupancy rate plunged to 26 percent in September, when a new curfew was put into effect, according to MKG Group, a French consulting firm. That figure is likely to worsen.

“There is unfortunately still no evidence that you can simply turn on and off an economy like a light switch without causing more structural damage, maybe even a short circuit,” Carsten Brzeski, global head of macroeconomics at ING Bank, said in a note to clients.

Only a few months ago, Europe appeared to be coming back to life. Trade fairs resumed and theaters reopened, albeit with restrictions on attendance. La Monnaie, the Brussels opera house, was brave enough to try to stage a production of “Die Tote Stadt,” by Erich Wolfgang Korngold. To avoid the need for an intermission, the performance was slashed to less than two hours, and the size of the orchestra was trimmed so that the musicians would not be crowded too tightly together.

To little avail. As Belgium recorded one of the worst infection rates in the world, the authorities forced the opera to close this month after just two performances.

The pandemic has interrupted the careers of people like Francesco Chiavon, a 28-year-old lawyer from Italy who worked for a U.N. program in Kosovo until funding ran out in January. Mr. Chiavon thought he wouldn’t have much trouble finding a new job, but then the coronavirus hit Italy hard. Now he lives with his parents in Udine, a city in northeast Italy, and is dependent on them for even trivial expenses like a beer with friends.

“I think the only way is proper investment in young people, because we are the future,” he said.

There is some reason to hope that the latest lockdowns will not be as deadly to growth as the first round. Schools, factories and many offices will remain open, at least for the time being. Harald Wilhelm, the chief financial officer of the German automaker Daimler, told reporters last week that traffic at Mercedes showrooms remained strong and that parts were flowing to factories, in contrast to the spring, when almost all carmakers stopped production.

“I’m not aware that we have any problems with supply chains,” Mr. Wilhelm said.

Mr. Broyer of S&P said the economic impact from “lockdown lites” in France and Germany might be only one-third as severe as it was earlier in the year.

But that relatively optimistic scenario depends in part on how consumers react. One reason for the impressive growth in recent months, Mr. Broyer said, was that people were spending the money they had saved while cooped up in their homes during March and April. But they might be more careful as the pandemic drags on and they deplete their bank accounts or start to worry about keeping their jobs.

Government-subsidized furlough programs in Germany, France and other countries have helped prevent mass unemployment but are beginning to strain national budgets. Government deficits amounted to 9 percent of gross domestic product in the eurozone in the second quarter, a record increase, up from less than 2 percent in the first quarter.

The European Union has pledged 750 billion euros, or $876 billion, in pandemic relief and last week sold bonds to help pay for the program. But the money has yet to reach the people and businesses that need it because of a political impasse in Brussels. The funds won’t start to flow until February at the earliest, and may already be inadequate in light of the renewed lockdowns.

Spain, where tourism plays a big role, provides a particularly extreme example of how the pandemic has upended the usual growth cycles.

Spain’s gross domestic product rose 16.7 percent in the third quarter from the previous quarter, a record, the national statistics institute said Friday. At the same time, the International Monetary Fund forecasts that Spain’s G.D.P. will still shrink by almost 13 percent for all of 2020.

The I.M.F. also downgraded its forecasts for Britain’s economy this week, saying G.D.P. would decline 10.4 percent this year and grow only 5.7 percent in 2021. That is a deeper contraction and slower recovery than the I.M.F. predicted just three weeks ago, a reflection of soaring Covid 19 cases and proliferating hot spots that are subjecting about a fifth of England’s population, or 11 million people, to the strictest containment measures.

One consolation: The pandemic is inspiring or perhaps forcing people to become more entrepreneurial. France and Germany are recording booms in the number of people starting businesses.

Isabel Sachs, a native of Brazil who lost her job at a marketing agency in Britain, started an online network, I Like Networking, that connects people who want to work in creative fields with mentors who have professional experience.

“Perhaps the job I used to do was not really going to happen anytime soon,” Ms. Sachs said. “We needed to adapt.”

Juha Saarinen: How to online during lockdown

OPINION: The latest Auckland lockdown really made it sink in that working from home actually means living at work. And, if you have kids, they’re going to school where you work and live. Sure, there are people who will take it in their stride. But for most of us, lockdowns make for some heavy lifting […]

Richard Prebble: Labour has run out of capacity for reform

OPINION: The Government has run out of bureaucratic capacity to undertake any more substantial reforms. The Finance Minister Grant Robertson gave this as the reason for a spending Budget with no substantial initiatives. Without having achieved any significant reforms new initiatives are now off the Government’s agenda. Labour’s record is going to be blowing 30 […]