Northwestern parts of the UK could be hit by the remnants of two separate Atlantic low-pressure systems, Zeta and Epsilon. This is expected to bring heavy rain as well as powerful southwesterly winds towards Britain. The Met Office has issued yellow weather warnings for rain that will last until midnight on Sunday. Areas affected include Wales, northwestern areas including Manchester and Liverpool, as well as western Scotland.

The downpours are expected to hit towards the end of this month, with wintry conditions arriving in November.

A sprinkling of snow has been forecast over the hills of Scotland on November 8, according to the latest snow depth charts from WXCHARTS, with temperatures predicted to plummet to 0C.

Before that, Met Office forecaster Grahame Madge warned Storm Zeta will bring strong winds and rain to the UK on Sunday as it pushes low pressure across the Atlantic.

He told Express.co.uk: “It’s a long way from our shores at the moment, but there is a concern over swell this weekend.

“Coastal communities are advised to take care as waves will be big and more impactful than people are used to.” 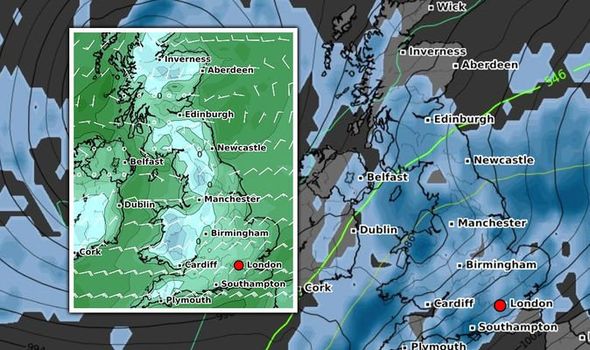 Met Office Chief Meteorologist Frank Saunders added there is a chance of flooding over the weekend.

He said: “This week has been fairly unsettled and we’ll see this typical autumnal weather continuing over the weekend, with heavy rain and strong winds expected to bring disruption and risk of flooding to some areas.

“Several yellow rain warnings are in place from today until Sunday, covering parts of northwest England, Wales and western parts of Scotland.

“Across the warning areas, rainfall totals of 30-40mm can be expected quite widely by the end of Friday, whilst over the hills and mountains of north Wales and Cumbria, where rain will be heaviest, more than 100mm is possible.” 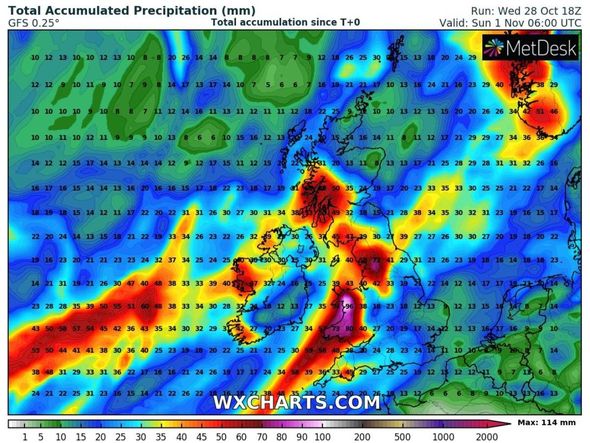 The forecast between Monday, November 2 and Sunday, November, 8 said: “Monday will start as the previous week left off, with low pressure and active fronts bringing windy and wet conditions to most of the UK.

“The remnants of Ex-Hurricane Zeta may be contained within Monday’s low pressure area. Mild in the south and east of England.

“This low pressure will clear by Tuesday, leaving a colder wind from the northwest and a few showers racing across the country. 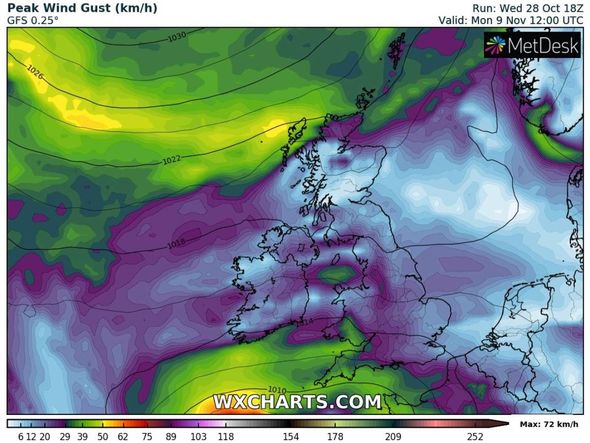 “Winds ease by mid-week as a big high pressure ridge moves in from the west.

“The threat of a frost on Tuesday and Wednesday night, so gardeners please take note!”

The forecast said: “Settled weather is likely to continue until the middle of November, with high pressure looking to dominate. This will bring generally dry conditions, especially for the south with any wet and windy weather being mostly confined to the north. 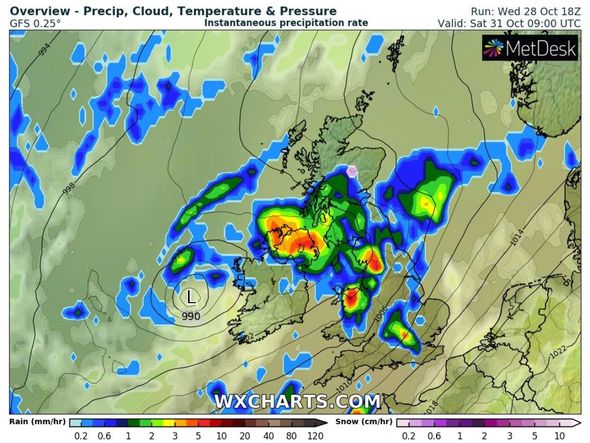 “Confidence is currently low for the second half of November but current signals suggest an autumnal setup with colder conditions developing and more frequent showers, with the heaviest of these showers affecting the east and northeast of the UK.

“Another spell of drier, more settled conditions is possible towards the end of November, but confidence remains low for this.

“Despite the settled conditions in the south temperatures are expected to be lower than average for the time of year.”

A mum has been slammed after posting a selfie of herself and two friends not wearing masks on a flight home from Berlin. Charisse Burchett, from Bath in Somerset, and her pals were described as "spoiled brats" for boarding the flight without the protective measure. Sharing a "cheeky photo" on Twitter, Burchett wrote: "We had […]

Foreign students in US ‘scared for the future’

Trump says working on a very big trade deal with India, but will take time

Sturgeon must be happy! Fury as Scottish Greens ‘use COP26 to advance nationalist agenda’