Kroncong is a soft, romantic genre of Indonesian music, one that Lara Lee listened to at home with her father, Jono Agung, while growing up in Sydney. Mr. Agung, who is Chinese and Indonesian, often played these wistful tunes while cooking for the family, classic Indonesian dishes like sate ayam, or chicken satay.

Carrying those melodic memories of food and music with her, Ms. Lee, 37, would go on to move to London and become a chef, cooking a range of cuisines. But she found that she was always drawn back to the Indonesian food of her youth. 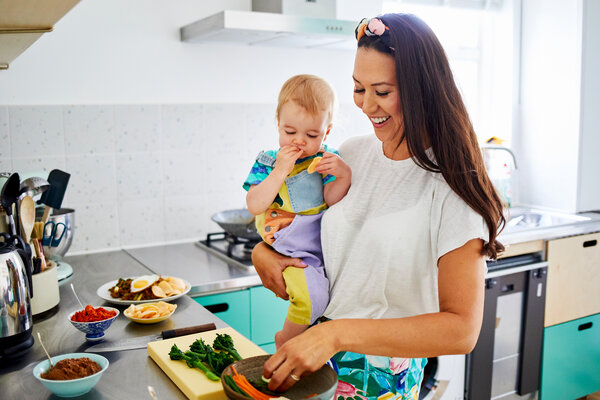 Her first cookbook, “Coconut & Sambal: Recipes From My Indonesian Kitchen,” which Bloomsbury Publishing released in the United States earlier this month, is a culinary expedition through a nation that is usually associated with its beaches and ancient temples, not its remarkable cuisine. Merging her family’s story with the complex history of the more than 17,000 islands that constitute the archipelago, Ms. Lee provides more than 100 recipes, an ode to the most populous nation in Southeast Asia, and the fourth most populous in the world.

“I really wanted to give the reader a sense of what I consider to be the real Indonesia, something away from that postcard image that we quite often see advertised about Indonesia,” she said, speaking from her home in London. “I really wanted them to understand that, yes, there are rice fields. And yes, there are lots of cars, but there’s also all this incredible food that has evolved over generations.”

In “Coconut & Sambal,” Ms. Lee provides recipes for staples, like gado gado, a salad brimming with steamed vegetables and drizzled in peanut sauce; nasi goreng, or Indonesian fried rice; rendang, slow-cooked meat bathed in coconut milk. But she brings lesser known dishes to the fore, too, like terung balado, spicy baked eggplant; ayam tangkap Aceh, a dish of chicken with curry leaves from Aceh province; and ikan woku blanga, a chile monkfish stew from the city of Manado. The book also includes multiple interpretations of sambal, the beloved chile paste.

Indonesian cuisine is as sensory as it is tropical. When asked what makes this cuisine stand out, Ms. Lee said it’s “the combination of textures, the sounds of the crunch of crispy foods, the balance of salt, sweet, sour, umami and heat and fragrance.”

Highlighting the variety within the cuisine is her way of refuting the notion that Indonesia can be defined by one city or island. Many people only associate the country with Bali, a popular tourist destination; Ms. Lee was eager to show an Indonesia that truly spanned the archipelago.

“This book is a tiny slice of what Indonesian cuisine is, which is just incredibly diverse,” she said. “Every region that you go to across thousands of islands has different, distinct flavors.”

Her introduction to Indonesian cooking began around age 5, when her paternal grandmother, Margaret Thali (called “Popo”), came from West Timor to live with her family in Australia. (Coralie Agung, Ms. Lee’s mother, is Australian, and Ms. Lee was born in Sydney.) Her grandmother prepared dishes like roasted Balinese chicken, gado gado and rendang while a young Ms. Lee watched. Eating her grandmother’s peanut sauce was one of her first memories of Indonesian food, she said.

“After going to the pool, my mom would buy us these sausage rolls, and we’d have them with the peanut sauce,” she said. “It really represented the marriage of an Australian woman to an Indonesian man, which of course defined my childhood.”

When Ms. Lee moved to London in 2011, she was startled to find only two Indonesian restaurants in the entire city at the time.

During a trip to Indonesia to visit family in 2016, she unearthed recipe books that her grandmother had handwritten — an odd discovery because recipes there were traditionally passed down orally. Those recipes provided the inspiration for “Coconut & Sambal.”

“I spent a lot of time at my aunties’ cooking dishes together that belonged to my grandmother,” she said.

Ms. Lee spent about six months researching recipes in Indonesia, journeying to places like Sumatra, in the west, and Timor, in the east. Back in London, she reached out to Sri Owen, the prolific food writer, cooking teacher and guardian of Indonesian cuisine, for help with recipes. The 85-year-old author, who is originally from West Sumatra, moved to London in 1964. She has written several cookbooks about Indonesian food, including “The Rice Book” and “Sri Owen’s Indonesian Food.”

“When I arrived in London, Indonesian food was not known at all,” Ms. Owen said. “I started cooking Indonesian food because I wanted to eat my own home cooking. The flavors of Indonesian food are difficult to leave behind, and eventually, I started sharing them with others.”

At that point, Ms. Lee had worked in several London restaurant kitchens, including the Fat Duck and the Ledbury. Over cooking sessions, Ms. Owen helped deepen Ms. Lee’s understanding of Indonesian food, and how to write about it for a broad audience. The relationship was mutually beneficial: Ms. Owen had been quietly looking for someone she could pass her knowledge to, someone who would carry on her work.

Ms. Lee’s book is a contribution to a cuisine that has been somewhat overlooked in the West, and even within Southeast Asia. While the cuisines from nearby Thailand and Vietnam are celebrated globally, Indonesian food has struggled to gain the same recognition. (Similar to London, most major cities in the United States have just a handful of Indonesian restaurants.)

Kevindra Prianto Soemantri, a food writer in Jakarta, said this is in part because there are so few culinary ambassadors for Indonesian food, as there have been for other Asian cuisines.

“We’re the largest country in Southeast Asia, but there are not many people that know our food outside of Indonesia,” he said. “We need chefs and cooks to promote our cuisine, the same way people have done with Thai and Japanese food.”

He views Ms. Lee as a 21st-century ambassador for the nation’s cooking.

“This book is a dream for our culture,” he said. “A cookbook like Lara’s gives us representation.”

Recently, Ms. Lee has been writing, doing online cooking demonstrations and cooking Indonesian food for supper clubs and pop-ups through the catering company she co-founded in 2016, Kiwi & Roo. She hopes her 14-month-old son, Jonah, will eventually love the food as much as she does.

“I just never get sick of eating those flavors, no matter how much I cook,” she said. “I came to realize that is just a part of who I am, is cooking that food.”

WASHINGTON (Reuters) – U.S. Senator John Thune said on Wednesday he believes the Trump administration is evaluating use of the Strategic Petroleum Reserve, and other measures, to help oil producers deal with the plunge in crude prices due to the coronavirus and a price war between Saudi Arabia and Russia. “There have been in the […]

By Swati Bhat MUMBAI (Reuters) – The outlook for India’s economic recovery has been sharply altered by the coronavirus outbreak, the central bank said in its Monetary Policy Report, underlining the pandemic’s deepening impact on South Asia’s engine of growth. “Prior to the outbreak of COVID-19, the outlook for growth for 2020-21 was looking up,” […]