Tens of thousands of Chileans gathered in the central square of Santiago to mark the one-year anniversary of mass protests that left more than 30 people dead and thousands injured, but the mostly peaceful rally deteriorated into riots and looting after night fell.

People gathered early in the day in demonstrations in cities throughout Chile that gained size and fervour as the evening progressed. Many touted signs and rainbow-coloured homemade banners calling for a “yes” vote next Sunday in a referendum about whether to scrap the country’s dictatorship-era Constitution, a key demand of the 2019 protests.

The demonstrations, while largely peaceful early on, were marred by increasing incidents of violence, looting of supermarkets and clashes with police across the capital later in the day. Firetruck sirens, burning barricades on roadways and fireworks on city-centre streets added to a sense of chaos in some areas.

Interior Minister Victor Perez spoke late in the evening, praising the early, peaceful rallies while criticising the late-night mayhem. He called on Chileans to settle their differences by voting in the upcoming October 25 constitutional referendum.

“Those who carry out these acts of violence do not want Chileans to solve our problems through democratic means,” Perez told reporters, promising to punish those who crossed the line on Sunday.

Early in the day, an angry mob jeered and threatened a Communist Party mayor. Later, masked individuals firebombed a police headquarters and church. Vandals attacked another Santiago church in the early evening, setting its spire aflame and choking side streets with smoke.

More than 15 metro stations were temporarily closed amid the unrest. Police fired tear gas and water cannon in skirmishes.

Al Jazeera’s Lucia Newman, reporting from Santiago, said the appearance of what she described as “masked vandals” raised concerns about the referendum.

“There are people who are afraid, especially leaders in the opposition, that this sort of thing could stop people from going out to vote next week,” she said.

Last year’s protests, which began October 18, continued until mid-December as Chileans gathered nationwide to call for reforms to the country’s pension, healthcare and education systems. Rioting and looting resulted in billions of dollars in damage and the unrest saw the military take to the streets for the first time since the rule of dictator Augusto Pinochet.

Police estimated that Sunday’s rally in Santiago attracted approximately 25,000 people by 6pm (21:00 GMT), far smaller than the largest protests of 2019. 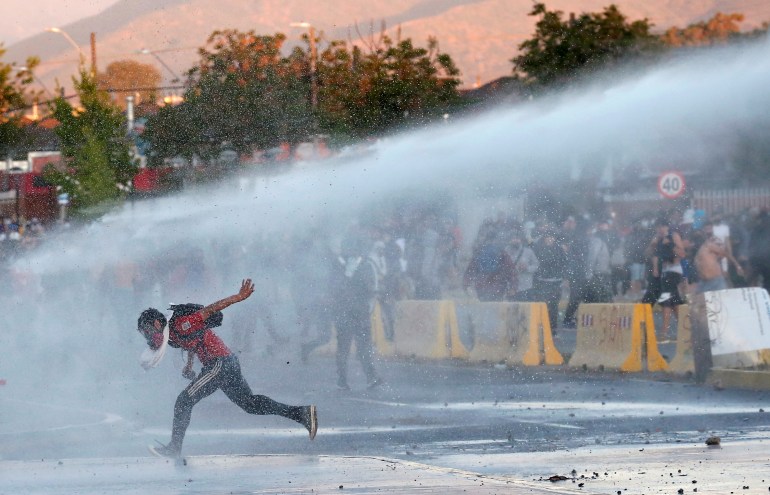 Police used water cannon to disperse the crowd marking the one-year anniversary of the protests and riots in 2019 [Rodrigo Garrido/Reuters]In the past few days, small-scale demonstrations and isolated incidents of violence have nonetheless resurfaced in Chile, as the capital’s six million citizens emerge from months of confinement as a result of the COVID-19 pandemic.

Up 3,000%: The tail risk funds that mastered coronavirus market mayhem

By Svea Herbst-Bayliss and Lawrence Delevingne (Reuters) – Boaz Weinstein was waiting for this. The New York hedge fund manager, seasoned by past financial crises and spooked by seemingly endless quarters of ever-higher markets, had for years set up for financial calamity, even if it meant sometimes poor returns. When panic over the coronavirus spread […]

By Jamie Freed SYDNEY (Reuters) – Some economy-class travelers envying those at the front of the plane with lie-flat beds may soon have another option: Air New Zealand Ltd <AIR.NZ> has developed a sleeping pod prototype to help passengers cope with near-18 hour flights. The Economy Skynest concept unveiled on Wednesday, which features six bunks […]

Yellowstone volcano: Expert debunks theory of ‘overdue’ eruption The Alaska Volcano Observatory has raised the colour code to ORANGE and the alert level to WATCH for the state’s Semisopochnoi volcano. In the latest report, the observatory warns “new explosions could occur at any time with no warning”.   The volcanic activity summary states: “High-resolution satellite imagery […]