Here’s what you need to know about the week’s top stories.

By Carole Landry and Judith Levitt

(Want to get this briefing by email? Here’s the sign-up.)

Here are the week’s top stories, and a look ahead 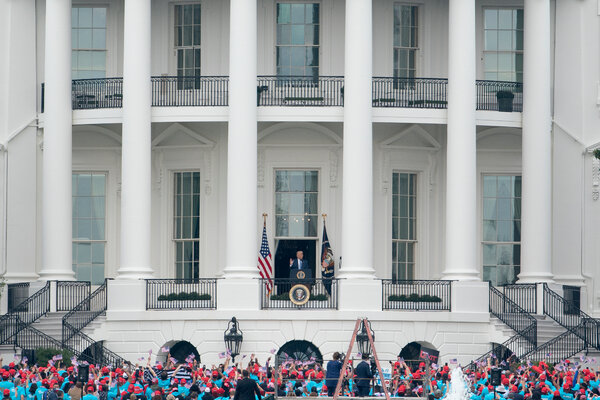 1. President Trump resumed holding big, public events a little more than a week after testing positive for the coronavirus.

On Saturday, Mr. Trump greeted several hundred supporters gathered on the South Lawn of the White House, telling the crowd from a balcony: “I’m feeling great!” Masks were required, but Mr. Trump peeled his off as he began his remarks.

Public health guidelines suggest that Mr. Trump should still be isolating, but with 23 days to go until Election Day and polls showing him falling far behind Joe Biden, Mr. Trump is trying to project strength. He added two more rallies next week, in Iowa and Pennsylvania, on top of his planned appearance in Florida on Monday.

More than two dozen people have tested positive in cases linked to the White House or President Trump. One, Chris Christie, the former governor of New Jersey, said on Saturday that he had been released from the hospital.

The latest Times investigation into the president’s tax data and other records found that more than 200 companies, special-interest groups and foreign governments had patronized Mr. Trump’s properties, funneling in millions of dollars, while reaping benefits from him and his administration.

“As president, Mr. Trump built a system of direct presidential influence-peddling unrivaled in modern American politics,” writes an investigative team that has been covering the president’s finances and taxes for almost four years.

Here are the investigation’s key findings and a note from our executive editor, Dean Baquet, that includes links to all of the team’s work.

Republicans applaud her as a dazzling legal scholar, while Democrats fear the creation of a conservative majority that would threaten the Affordable Care Act, gay marriage and abortion rights. Judge Barrett signed an anti-abortion ad in 2006.

COMMENTARY: How Black classical musicians are building communities to support each other

Music has been significant for many during COVID-19 isolation, and in these same months, Black musicians have amplified the momentum of the Black Lives Matter movement. While pop or hip hop music are genres whose agility and responsiveness make them natural sites for popular commentary, this threatens to neglect other arenas of music-making. Some arts […]

So the blue wave fell short of expectations. Joe Biden will be the next president, but unless Democrats pull off an upset in the Georgia Senate runoffs — which, to be fair, they might, given the remarkable strength of their organizing efforts there — Mitch McConnell will still be the Senate majority leader. Big business […]