BBC Weather forecaster Louise Lear warned blustery hail showers are set to hit some parts of the UK on Saturday as a new Arctic front moves across the country. Wet and windy weather is forecast for most parts of the country, with south-west Scotland staying the dryest on Saturday afternoon. Ms Lear said: “We’ve got some rain around north-west of England into north-west of Wales.

“That will start to become quite showery as it moves into the Midlands and down into the south-east corner.

“Favourite spots for a dry spell into the afternoon maybe across south-west Scotland.

“But some of these showers could be heavy with the odd rumble of thunder and some hail mixed in.

“And it’s cool for the time of year because of the wind direction coming from a north-westerly so a blustery afternoon.

“That will dry the showers quite quickly but look at the temperatures: 10C to 14C, that’s down just a tad on where they should be really for the middle part of October.” 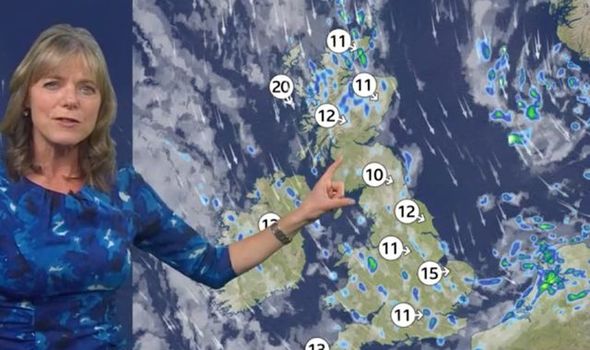 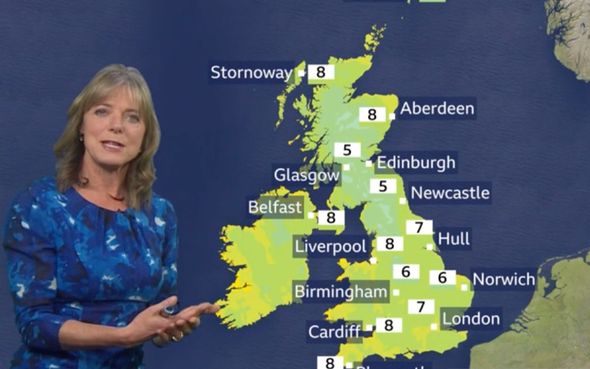 September saw some last-minute summer sun, before cold and rainy weather set in and continued into October.

The forecast has seen continued cold weather and even snow possible for parts of the UK.

Now many are wondering what this means for the winter months.

This weather pattern looks to continue throughout October, with the possibility for overnight frost and even snow for parts of the country.

Weather maps from WXCharts show a bitterly cold weekend ahead, with temperatures plunging from Thursday.

The Met Office is also predicting a risk of thundery showers across the North of England, with strong winds and rain for central and southern areas.

WXCharts, which gets its data from MetDesk, shows temperatures plunging to freezing on Saturday.

Maps show by Saturday UK temperatures could sink in some parts of Scotland and northern England as low as 0C.

Netweather forecasters say Saturday will have a cold start, with a north to northwest wind.

This wind will keep temperatures cold across the weekend, however, the autumn sunshine could break through in some areas.

Long-range forecasts are tricky, as they can be unreliable, and it is hard to predict what will happen when. 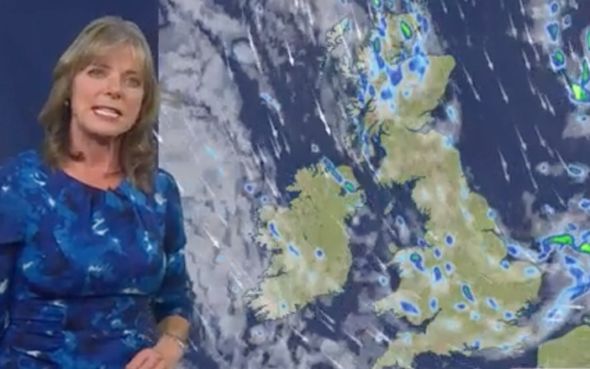 However, Severe Weather Europe (SWE) has published its winter forecast for 2020/21 by using major weather models.

SWE is forecasting a rather chilly winter for many across the globe, with “a strong La Nina cycle, emerging in the tropical Pacific ocean”.

SWE explains this strong La Nina cycle “will alter the jet stream patterns over North America and the Pacific Ocean, extending its reach to the rest of the world.

“The Winter forecast from major models, reveals this jet stream altering by the La Nina, and its possible weather outcomes.”

For the weather over the next six months, the development of a cold ENSO phase is the key-feature.

Current data shows the ocean temperature anomalies and a quite extensive colder-than-normal area in the tropical Pacific.

(This April 11 story has been refiled to replace “boost” with “cut” in paragraph six.) By Timothy Gardner WASHINGTON (Reuters) – Republican U.S. senators from oil states who recently introduced legislation to remove American troops from Saudi Arabia said on Saturday they had spoken with three officials from the kingdom and urged them to take […]

COPENHAGEN (Reuters) – Freight-forwarder DSV Panalpina <DSV.CO> said on Friday it would start direct cargo flights between Shanghai and Huntsville, Alabama from next week to cope with capacity constraints caused by the coronavirus outbreak in China. The global freight industry has been hard-hit by uncertain demand and crews’ health concerns following the outbreak of the […]

It’s not just the Midwest: The U.S. outbreak is accelerating all over the map.

It Rained at the Summit of Greenland. That’s Never Happened Before.

Wisconsin Faces a Challenge: Getting Out the Vote When Most People Have Already Voted