Hi. Welcome to On Politics, your guide to the day in national politics. I’m Giovanni Russonello, switching places today with Lisa Lerer. 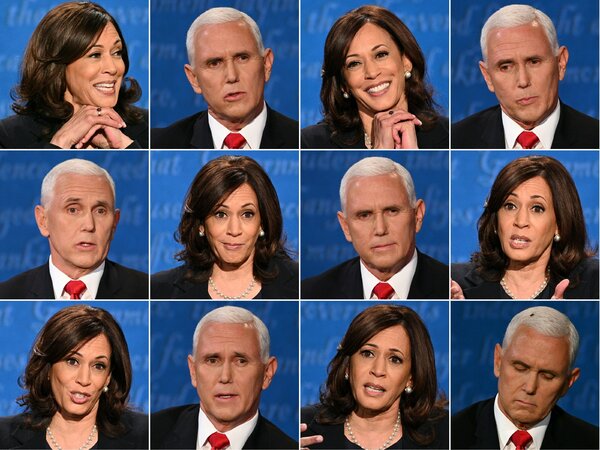 There was something a little reassuring about the return-to-normal feeling of last night’s vice-presidential debate. But in that reassurance, was there was also something disappointing?

If Kamala Harris and Mike Pence can be called genuine, it’s as politicians: It’s hard to imagine either one without the affect they use in front of the cameras. So, along with an air of decorum, another thing made a comeback last night: the art of the rhetorical dodge.

Both Mr. Pence, the incumbent, and Ms. Harris, a senator from California, were skillful on the attack, pinning definitive adjectives and stories to their opponent — some accurate, some warped. But they were just as smooth on the defensive, wriggling out of answers on uncomfortable topics and moving the focus elsewhere.

What they didn’t say in these situations is as telling as what they did choose to focus on.

Mr. Pence surprised some viewers with his willingness to engage in a vigorous debate over the administration’s coronavirus response — insisting that President Trump had taken the virus seriously from Day 1, an argument contradicted by the president’s own statements. But in other areas, his preference was to duck and roll.

The debate’s moderator, Susan Page of USA Today, asked Mr. Pence whether he would like to see abortion made illegal in his home state of Indiana, were the Supreme Court’s 47-year-old Roe v. Wade decision to be overturned. The question was particularly relevant because Republicans are seeking to confirm Mr. Trump’s court nominee, Judge Amy Coney Barrett, who could potentially help overturn Roe.

Mr. Pence never actually answered the question. By a two-to-one margin, Americans have said in recent polls that they want the ruling kept in place. Mr. Pence did reaffirm that he was “pro-life — I don’t apologize for it,” but he knows that even if he would personally welcome seeing the decision struck down, that’s not a popular position to take — especially with the country watching the fight over Judge Barrett so closely.

Mr. Pence refused to say last night that he and Mr. Trump would honor the official results of the election. Depending on how things play out in November, this might be remembered as one of the most significant moments of the debate.

Responding to a question from Ms. Page about accepting the election’s results, Mr. Pence was artfully ambiguous as to whether his ticket would concede a loss: “We have a free and fair election, we know we’re going to have confidence in it — and I believe in all my heart that President Donald Trump’s going to be re-elected for four more years.”

Mr. Pence stopped short of the language Mr. Trump used last week, when the president openly cast doubt on the results of the election as he debated Joe Biden. “This is going to be a fraud like you’ve never seen,” Mr. Trump said. But by refusing to step astride his boss, the vice president left Mr. Trump’s words standing as the most definitive representation of how the White House is looking at the election: Win? Legit. Lose? Fraud.

This was the biggest TV moment of Kamala Harris’s career so far, and she brought to bear the prosecutorial skills she has demonstrated in Senate hearings over the past few years. Practically the first words out of her mouth on Thursday were, “The American people have witnessed what is the greatest failure of any presidential administration in the history of our country.”

But as aggressive as she could be on offense, she was just as careful when playing defense.

Fearing that Judge Barrett might give conservatives a durable, 6-to-3 majority, many progressives have been pushing the Biden campaign to embrace a plan to add justices to the Supreme Court as a countermeasure to the Republicans’ rushed confirmation process.

A Washington Post/ABC News poll late last month showed that Americans tend to oppose adding more justices to the court, though among Democrats there was a slight tilt toward supporting the idea.

During the primary campaign, Mr. Biden rejected the idea, which had been promoted by his Democratic rival Pete Buttigieg. But at last week’s debate, with the proposal gaining traction on the left, Mr. Biden sidestepped a question about expanding the court.

Ms. Harris did the same thing yesterday. Mr. Pence tried to corner her, saying: “I think the American people really deserve an answer, Senator Harris. Are you and Joe Biden going to pack the court if Judge Amy Coney Barrett is confirmed?” But Ms. Harris wouldn’t budge, instead reiterating that the Senate should not vote to confirm Judge Barrett so close to Election Day.

… on the Green New Deal

Mr. Pence began a discussion about climate change by refusing to embrace the scientific consensus that global warming is caused by human activity. As Ms. Harris looked on in feigned amazement, Mr. Pence insisted instead that “President Trump has made a commitment to conservation and to the environment” — even though the administration has dismantled dozens of environmental regulations.

Then he sought to turn the tables on his opponent by pointing out that she had been a co-sponsor of Green New Deal legislation in the Senate and arguing that the proposal would hurt the American economy. Mr. Biden has avoided saying that he would embrace that exact proposal, although his website does describe it as a “crucial framework” for his own plan — a relatively ambitious one that has heartened many climate activists.

The words “Green New Deal” were mentioned 16 times in the debate last night, and zero of them were from Ms. Harris. But it’s not clear that she and Mr. Biden have much to be afraid of on this front: By a two-to-one margin, Americans said in a PBS NewsHour/NPR/Marist College poll late last year that they thought the Green New Deal was a good idea. That included 63 percent of suburbanites and 61 percent of independents.

What’s next for the debates? Watch our free panel discussion

Whether the Oct. 15 presidential debate will happen is … a bit up in the air right now. But no matter what, there’s going to be a lot to talk about.

Join New York Times reporters for a free virtual event as they discuss what to watch for, what to expect in the days ahead and what we can learn from the polling. Featuring your On Politics host Lisa Lerer, plus politics reporters Alex Burns and Astead Herndon and The Upshot’s Nate Cohn, and hosted by Rachel Dry, a Times deputy politics editor.

We want to hear from our readers. Have a question? We’ll try to answer it. Have a comment? We’re all ears. Email us at onpolitics@nytimes.com.

From Opinion: What happens to Trumpism? To the Democrats?

“If Trump loses the election, what happens to Trumpism?” asks Times columnist Thomas Edsall. He writes that “the Trump doctrine — xenophobia, animosity to immigration, racial resentment and hatred of all things liberal — is almost certain to continue as the most powerful force in the Republican Party.”

In late August, Times columnist Ross Douthat pondered a similar question. His answer: “The knowledge that Trumpism has delivered — about what is possible in American politics, what Republicans will vote for and accept, what conservatism can accommodate — will not simply disappear. It may go underground for a time, if there is a temporary restoration of Republican politics as usual under a Joe Biden presidency. But the lessons will still be there to be picked up, the truths exposed hard to suppress. Any future Republican who seeks or occupies the presidency will have learned something from the years of Donald Trump.”

Mr. Edsall says that if Joe Biden loses, it’s likely that “the Democratic left — the Bernie Sanders-Elizabeth Warren-Alexandria Ocasio-Cortez wing — would wrest control of the nomination process in 2024.” But if Mr. Biden wins, he could be overcome by a system “geared to push the two parties in opposite ideological directions.” This could pose a challenge for a centrist like the former vice president, “increasing the pressure on him to move left, even if such movement threatens Democratic prospects in 2022 and 2024.”

As for the Republicans’ prospects in November? Current polling may suggest that “after 25 years of bitter partisan gridlock, Donald Trump is about to usher in an era of dynamic one-party rule,” as Times columnist David Brooks wryly put it.

The Trump and Biden campaigns spent Thursday sparring over the debate schedule as President Trump objected to a plan for a virtual debate. Read the latest updates.

Brexit: Market ‘liberalisation’ could lift currency says expert Britain has been tipped to become a go-to-market for investors from around the world once regulatory divergence from the European Union has been achieved. Arnab Das, global market strategist at US investing firm Invesco, said the UK will see more “liberalisation” as a result of the Brexit process […]

Wales will be next! Campaigner says Welsh will follow Scots out of the Union after Brexit

Wales: Adam Price outlines hopes for 'radical' independence Sion Jobbins, chairman of Yes Cymru, believes Scotland will vote for independence if SNP leader and First Minister Nicola Sturgeon succeeds in forcing a referendum on the issue – and if she does, he believes the case for Wales will become undeniable. Unlike Scotland, the independence movement […]

Moria fire MAPPED: Where is Moria? What happened at the Moria Refugee Camp?

Deloitte and EY join rivals in cutting pay during pandemic