BBC Weather forecaster Matt Taylor warned northerly winds coming down from the Arctic will engulf the country this weekend forcing temperatures into single figures and bringing hail showers and cold nights. He said: “It is a weekend for layers, it is expected to feel colder and linked to colder air, linked to this weather front which has brought rain to Scotland and Northern Ireland, now turning showery. It has a longer spell of rain over the coming hours and parts of northern England and North Wales, but then the sunshine comes out and the showers pack it it.

“Some of the showers will be heavy and thundery and with a little bit of hail mixed in as well.

“A rain break with some sunshine this morning, but just cloud, outbreaks of rain becoming narrower and less heavy for a time, but will push to the south-east corner by the time we get to the end of the afternoon.

“A blustery day with temperatures down on what we saw yesterday, around 10-14C, we saw 19C yesterday, maybe those highs in the south-west around 15C.

“We have heavier bursts going across the north and west of the country as we go into tonight, some areas becoming rain clear and it is here where we see some of the lowest of the temperatures into tomorrow morning, well down into single figures, maybe the off isolated frost.” 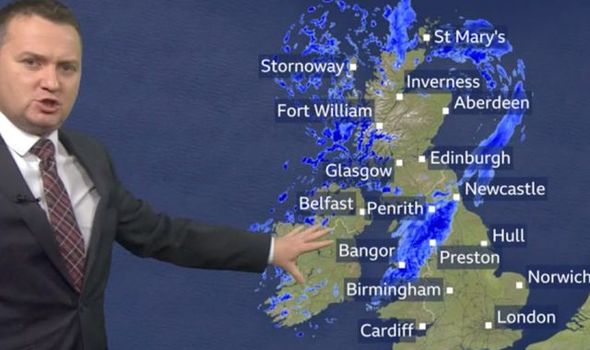 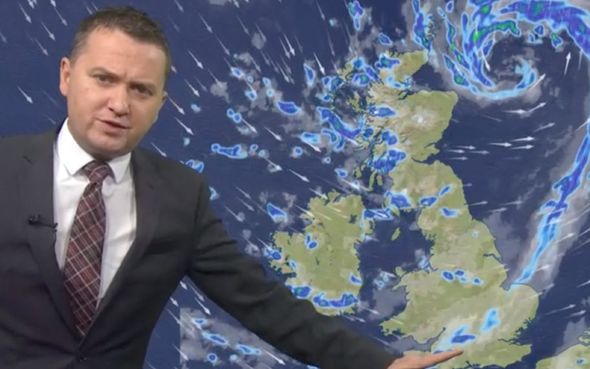 The cold Arctic front will send shivers through the Scottish Highlands on Thursday night as lows of -2C hit, according to the Met Office’s weather forecast.

Glasgow and Ayr will also see temperatures plunge to 0C on Friday night, the latest maps from WXCHARTS show.

Northern regions of England including Liverpool and Newcastle will also be hit by lows of 2C. And the south will stay in single figures too as temperatures drop to 6C.

The Met Office tweeted: “Temperatures are set to tumble as we head towards the end of the week.

“Even some southern areas may dip close to freezing by Friday night, with a risk of a fairly widespread grass frost across much of the country.”

Paul Michaelwaite, a forecaster at Netweather, warned of snow battering the highlands of Scotland tonight.

He said: “Parts of Scotland will struggle to get out of single figures, and some of those showers will turn wintry up over the higher ground of the Highlands too.

“This evening and overnight, a more organised band of rain and showers will arrive into the northwest of Scotland, bringing more sleet and snow to the tops in the Highlands.

“That’ll work its way steadily southeast, clearing Scotland by dawn and continuing through England and Wales during Friday.

“Behind that, there’ll again be showers coming down from the northwest, and they’re likely to be more widespread than they were today. 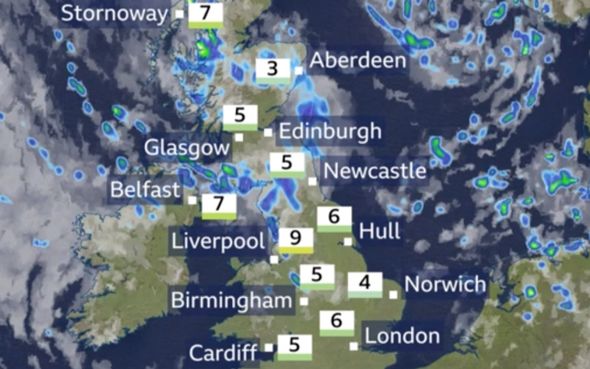 “It’ll be another cold feeling day for the time of year, with blustery northwest winds and maximum temperatures of 8-12c typically, although the far southeast will be more sheltered and milder at 12-15c.”

Mr Michaelwaite added the freezing cold front will continue throughout this weekend.

He said: “Into Saturday, there’ll be low pressure in the North Sea, continuing to feed northwest winds across the country, so it’ll not be feeling especially warm anywhere.

“To start with, the showers will still be quite widespread, maybe with one or two bands of them working their way from northwest to southeast.

“But with high pressure just nudging in closer from the west and the low easing further east by Sunday, they’re likely to become more confined to the coasts with most inland regions staying dry with some long sunny spells.”

By Elizabeth Piper and Andrew MacAskill LONDON (Reuters) – Britain on Monday unveiled its mandate for trade talks with the United States, with Prime Minister Boris Johnson vowing to drive a hard bargain in negotiations that are set to test the two allies’ “special relationship”. After leaving the European Union in January, Johnson wants to […]

By Amanda Becker WASHINGTON (Reuters) – U.S. Democratic presidential hopeful Bernie Sanders’ decision to highlight an unofficial endorsement from Joe Rogan drew criticism on Friday due to the comedian’s brand of humor that some see as dismissive of issues like equal pay and transgender rights. The online flap comes as Sanders, a U.S. senator from […]

IMF, WHO urge leaders to focus on health spending to get virus under control

No global digital tax by end-2020 would mean chaos: France