21:20 ET – Pence accuses Harris of ‘playing politics’ with US development of a vaccine

Pence, instead of answering the second question on the role of the vice president, scolded Harris for saying she did not trust the Trump administration’s accelerated efforts to develop a vaccine for the coronavirus.

“The reality is we are going to have a vaccine in record time,” Pence said, telling Harris to “Stop playing politics with people’s lives”.

“President Donald Trump did what no other American president had ever done. That was, he suspended all travel from China, the second largest economy in the world. Now, senator, Joe Biden opposed that decision. “

Al Jazeera debate analyst Alan Schroeder: “In her first answer, Kamala Harris previews how she will argue her case: Start with a strong, detailed critique of the Trump administration, then pivot to how a Biden administration would do better.

“This ‘two-for-one’ style of responding is something candidates practice in their mock debate sessions.”

21:05 ET – Kamala Harris says US has witnessed ‘greatest failure’ by Trump on COVID-19

The first question from moderator Susan Page went to Senator Kamala Harris on the coronavirus pandemic.

The American people have witnessed what is the greatest failure of any administration in our country,” Harris responded.

The Trump administration “knew” how serious the coronavirus threat was and  “covered it up.”

“They minimised the seriousness,” Harris said. Joe Biden has “a national strategy for testing and contacting tracing” that would be implemented, Harris said.

Susan Page of USA Today will be moderating tonight’s debate and prior to the start, she asked the audience to hold their applause throughout.

“This debate is not about you and me. It is about the millions of Americans who will be watching it,” Page said.

“During the debate, please do not cheer, boo, hiss, or laugh.”

“And if you could send me some good karma, that would be appreciated,” she quipped. “But quietly.”

Tonight’s debate is taking place in Kingsbury Hall at the University of Utah in Salt Lake City and the pool reporter inside the hall describes the set up there: “The stage is set up with three desks and chairs set about 12 feet apart for the two candidates and the moderator, separated by plexiglass screens. … Some 20 seats for guests are set up in front of the stage, at least 6 ft apart.” 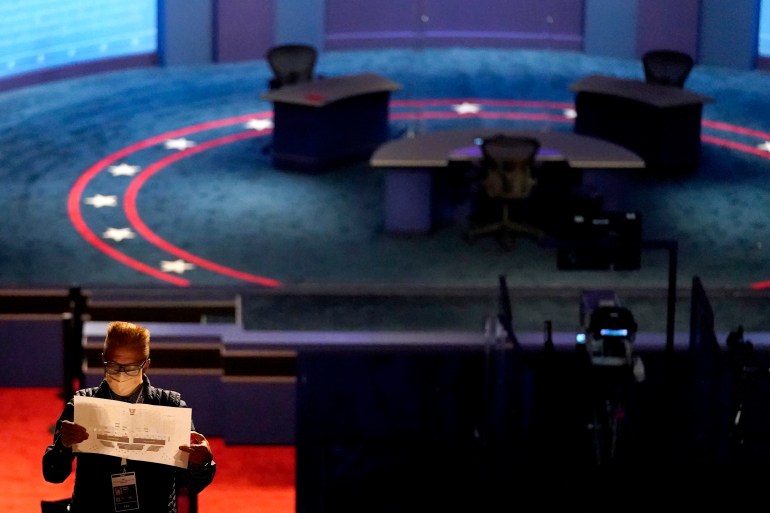 A member of the production staff holds a seating chart while putting labels on chairs socially distanced from each other ahead of the vice presidential debate at the University of Utah [Julio Cortez/AP Photo]The University of Utah selected 60 students via a lottery to sit in the audience, and the tickets they distributed included a liability waiver for the Commission on Presidential Debates and the university regarding coronavirus: “The ticket holder relieves the CPD and the event site host of any and all liability … including in the event of … sickness (including Covid-19).

20:10 ET – This is the third male-female VP debate; the first had some tension

In 1984, the first-ever general election debate between male and female candidates proved treacherous for then-vice president George HW Bush, AlJazeera.com debate analyst Alan Schroeder notes. About halfway through the debate, opponent Geraldine Ferraro delivered a soundbite that resonated with millions of American women: “I almost resent, Vice President Bush, your patronising attitude that you have to teach me about foreign policy.”

For the remainder of the debate, Bush never regained his footing. 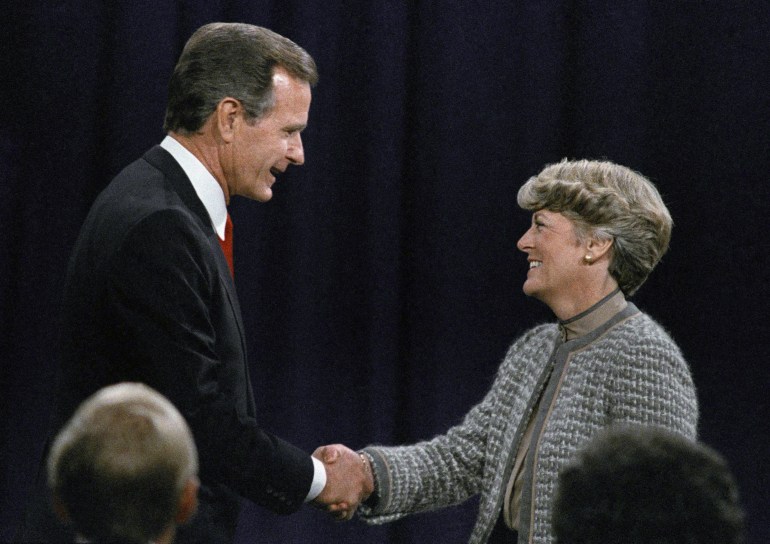 Various women’s groups around the US will gather as Kamala Harris, the first woman of colour on a major ticket takes the debate stage tonight.

“I really can tell that Kamala is ready,” said Rahdiah Barnes, the president of the National Association for Multi-Ethnicity in Communications in New York, which pushes for diversity in media, and has organised a watch party. “This is history. She has something to prove, and I’ve heard her say a couple of things over the past couple days, so I can know that she’s getting ready for war.”

19:45 ET – Battling over details in the time of coronavirus

Vice President Pence’s campaign initially rejected the proposal to have plexiglass barriers between the candidates, as a coronavirus precaution, but later relented.

Pre-debate haggling about production details dates all the way back to the 1960 Kennedy-Nixon debates, points out AlJazeera.com debate analyst Alan Schroeder. In past years, on-site negotiators have battled about lighting, lecterns, room temperature, reaction shots – even the colour of the background. Who could have imagined that in 2020 the dispute would involve plexiglass? 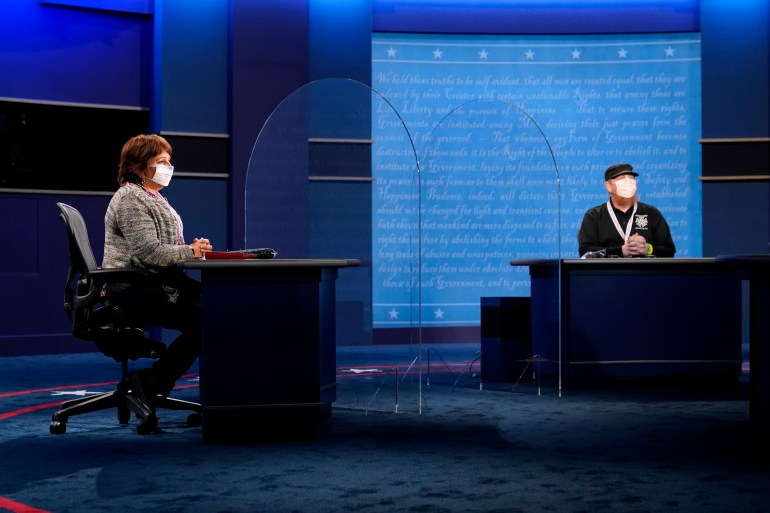 Even if Donald Trump had not become the international poster child for COVID-19, he was always destined to loom over the vice-presidential debate, especially after his disastrous opening encounter with Joe Biden, writes presidential debate expert Alan Schroeder.

Now, the president’s illness – and the uncertainty shrouding the state of his health – presents Republican running mate Mike Pence with a tricky challenge. It also complicates the task of Democratic nominee Kamala Harris, leaving her with a delicate line to walk. Even in absentia, even from his sickbed, Trump commands centre stage at the vice-presidential debate.

By Jonnelle Marte (Reuters) – The economic toll of the coronavirus pandemic hit home for Americans last month, as consumers braced for job losses, anticipated spending cuts and grew more pessimistic about their ability to cover their bills, according to data released by the Federal Reserve Bank of New York on Monday. Expectations worsened dramatically […]

Don’t miss a thing by getting the Daily Star’s biggest headlines straight to your inbox! A woman and her one-year-old daughter were murdered in an horrific crime that is being blamed on a $2million lottery win. Tiffani Hill, 31, and her child Leanne Donato were fatally shot by Hill’s husband husband John Donato, 42, who […]

By David Shepardson WASHINGTON (Reuters) – The fatal Dec. 29 crash of a Tesla Inc vehicle in Southern California will be investigated by the U.S. government’s auto safety regulator, the agency said on Tuesday. The U.S. National Highway Traffic Safety Administration (NHTSA) said earlier this month it had opened an investigation into a 12th Tesla […]

UK companies were worried about outlook even before lockdown: CBI