A grand jury has indicted the St Louis couple who displayed guns while hundreds of racial injustice protesters marched on their private street.

Al Watkins, a lawyer for the couple, confirmed to The Associated Press news agency on Tuesday the indictments against Mark McCloskey, 63, and his wife, Patricia McCloskey, 61. A spokeswoman for Circuit Attorney Kim Gardner declined to comment.

The McCloskeys, who are both lawyers, have become folk heroes among some conservatives. They argue that they were simply exercising their Second Amendment right to bear arms, and were protected by Missouri’s castle doctrine law that allows the use of deadly force against intruders.

The case has caught the attention of President Donald Trump, and Republican Missouri Governor Mike Parson has said he will pardon the couple if they are convicted.

The McCloskeys also were featured speakers on the first night of the Republican National Convention. They have blamed the “leftist” Democratic St Louis leadership for their plight. 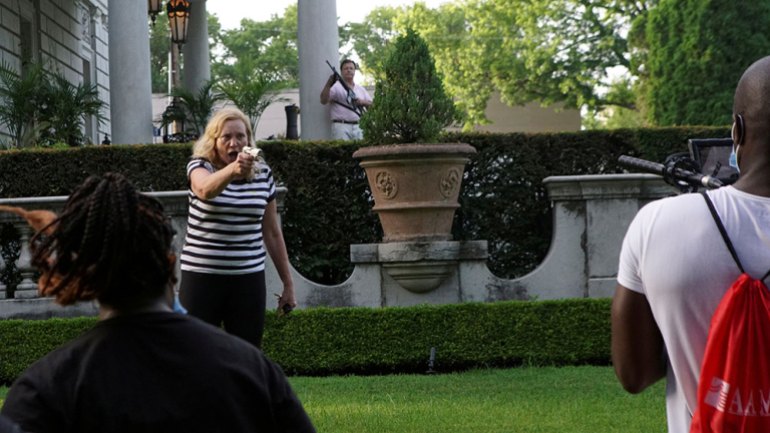 Patricia McCloskey and her husband Mark McCloskey draw their firearms on protesters, including a man who holds a video camera and microphone, as they enter their neighbourhood during a protest [File: Lawrence Bryant/Reuters]But Gardner, a Democrat, charged the couple with felony unlawful use of a weapon. She said the display of guns risked bloodshed at what she called an otherwise peaceful protest.

Watkins said that addition to the weapons charge, the grand jury indictment includes a tampering with evidence charge. It was not clear what led to that additional count, he said.

The McCloskeys contend the protest was hardly peaceful. They say protesters came onto the private street after knocking over an iron gate and ignoring a “no trespassing” sign, and said they felt threatened.

The incident happened on June 28 as protesters were walking towards the home of Mayor Lyda Krewson, a few blocks away. They suddenly decided to veer onto the McCloskeys’ street, prompting the confrontation that was caught on mobile phone video. It showed Mark McCloskey in front of the $1.15m home armed with an AR-15 rifle and Patricia McCloskey with a semiautomatic handgun.

A police probable cause statement said protesters feared “being injured due to Patricia McCloskey’s finger being on the trigger, coupled with her excited demeanor.”

Mark McCloskey, after a brief court hearing last week, expressed anger that he and his wife faced criminal charges while those who trespassed onto his property did not.

“Every single human being that was in front of my house was a criminal trespasser,” McCloskey said on October 6. “They broke down our gate. They trespassed on our property. Not a single one of those people is now charged with anything. We’re charged with felonies that could cost us four years of our lives and our law licences.”

The June protest in St Louis was among hundreds of nationwide demonstrations against racial injustice in the aftermath of George Floyd’s death in Minneapolis police custody.

By Nathan Allen and Ingrid Melander MADRID (Reuters) – The surging death toll from the coronavirus pandemic in Spain drove a regional health official to tears on Wednesday, while Prime Minister Pedro Sanchez predicted an economic slump, urging all to rally in what he called a “war” against the virus. With nearly 560 deaths, Spain […]

By Chris Gallagher TOKYO (Reuters) – When Emi Tanimura failed to find a daycare slot for her new-born daughter, she had to take a radical step for Japan to avoid a long time away from her job at communications firm Sunny Side Up <2180.T>. She started working from home. Now a mother of two, she […]

NEW DELHI (Reuters) – Indian will emerge stronger from an economic slowdown, Prime Minister Narendra Modi said in a speech on Friday, reassuring investors about their long-term bets on Asia’s third-biggest economy. India, once the poster child of economic growth in the developing world, grew at the slowest pace in six years during the July-September […]

US election: Winning legislative candidate had died from Covid 19

This is another News Portal > World News > Sudan passes 2020 budget with anticipated deficit of $1.62 billion