US President Donald Trump, who is in hospital with COVID-19, was driven outside the facility on Sunday so he could wave to a group of supporters on the street in a move critics derided as a dangerous political stunt.

Video showed Trump, wearing a black mask, waving from the back seat of a black four-wheel drive with two men – also masked in the front seats.

“President Trump took a short, last-minute motorcade ride to wave to his supporters outside and has now returned to the Presidential Suite inside Walter Reed,” White House spokesman Judd Deere said in a statement. “Appropriate measures” had been taken, he added.

Trump was admitted to Walter Reed, a military hospital near Washington, DC on Friday shortly after he was diagnosed with COVID-19. The 74-year-old’s doctors said he has been given oxygen, as well as experimental treatments – which are usually used for people who have more severe cases of the disease, including the steroid dexamethasone.

Trump has posted videos and photos about his experience in hospital on Twitter since he was admitted.

“We’re going to pay a little surprise to some of the great patriots that we have out on the street,” Trump said in his most recent video – posted shortly before the drive-past.

Trump drives by the press and supporters outside Walter Reed hospital. pic.twitter.com/3phtKthqTH

Dr James Phillips, an assistant professor of emergency medicine at George Washington University, was among those criticising the drive-by, which he called “political theater”.

“Every single person in the vehicle during that completely unnecessary Presidential drive-by has to be quarantined for 14 days,” Phillips wrote on Twitter. “They might get sick. They may die.”

People with COVID-19 are generally required to quarantine for 14 days to avoid infecting others and the virus spreads more easily in indoor, confined environments.

“Beyond the ethical, clinical, epidemiological and health implications of this drive by, it shows a dire obsession with showing the public he’s still in control, creating a false sense of normalcy and trying to normalize a highly transmissible virus,” Dr Syra Madad, senior director of Special Pathogens at NYC Health + Hospitals, wrote on Twitter. 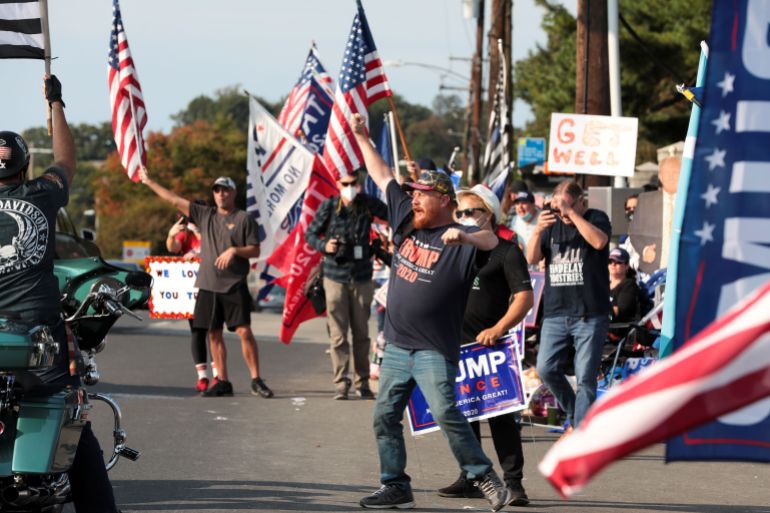 In the video, Trump said he had “learned a lot about COVID” by battling the virus in hospital.

“This is the real school. This isn’t the ‘let’s read the books school,’ and I get it, and I understand it, and it’s a very interesting thing,” he added.

Trump has consistently downplayed the pandemic and, prior to his diagnosis, rarely wore a mask. The World Health Organization (WHO) and medical experts say face masks, hand-washing and physical distancing are key to curbing the spread of COVID-19.

Nearly 210,000 Americans have died from the disease, the highest death toll anywhere in the world.

Every single person in the vehicle during that completely unnecessary Presidential “drive-by” just now has to be quarantined for 14 days. They might get sick. They may die. For political theater. Commanded by Trump to put their lives at risk for theater. This is insanity.

Trump’s doctors said on Sunday that the president’s condition had “continued to improve”, and that he could be discharged to the White House as early as Monday.

Trump and his wife Melania were confirmed to have the disease after his close adviser Hope Hicks was diagnosed with COVID-19 last week. A number of the president’s close allies have also tested positive including his campaign manager Bill Stepien, former White House senior adviser Kellyanne Conway and former New Jersey Governor Chris Christie.

The US election takes place in less than a month.

Ryanair to cut Italy flights by 25% due to coronavirus

By Conor Humphries DUBLIN (Reuters) – Ryanair <RYA.I> will cut capacity in and out of Italy, its largest market, by 25% for three weeks due to a significant drop off in bookings since a coronavirus outbreak, Europe’s biggest low-cost airline said on Monday. The Irish airline said it did not expect the cancellations to have […]

Don’t miss a thing by getting the Daily Star’s biggest headlines straight to your inbox! A British dad has opened up on the terrifying moment he was bitten twice by a king cobra, leaving him blind. Ian Jones, 50, from the Isle of Wight, was in northern India last year, battling with Covid-19 for the […]

US President Donald Trump fruitlessly pressed Georgia’s governor on Saturday to call a special legislative session aimed at subverting the presidential election results in that state as Trump’s fixation with his defeat overshadowed his party’s campaign to save its majority in the Senate. Trump and Georgia Governor Brian Kemp spoke by phone hours before Trump […]

Prominent businessman’s trial: ‘He has enough money to buy people to survive’

The Pleasures of Green Salad

This is another News Portal > World News > Trump favors more coronavirus aid to U.S. states, but in later bill